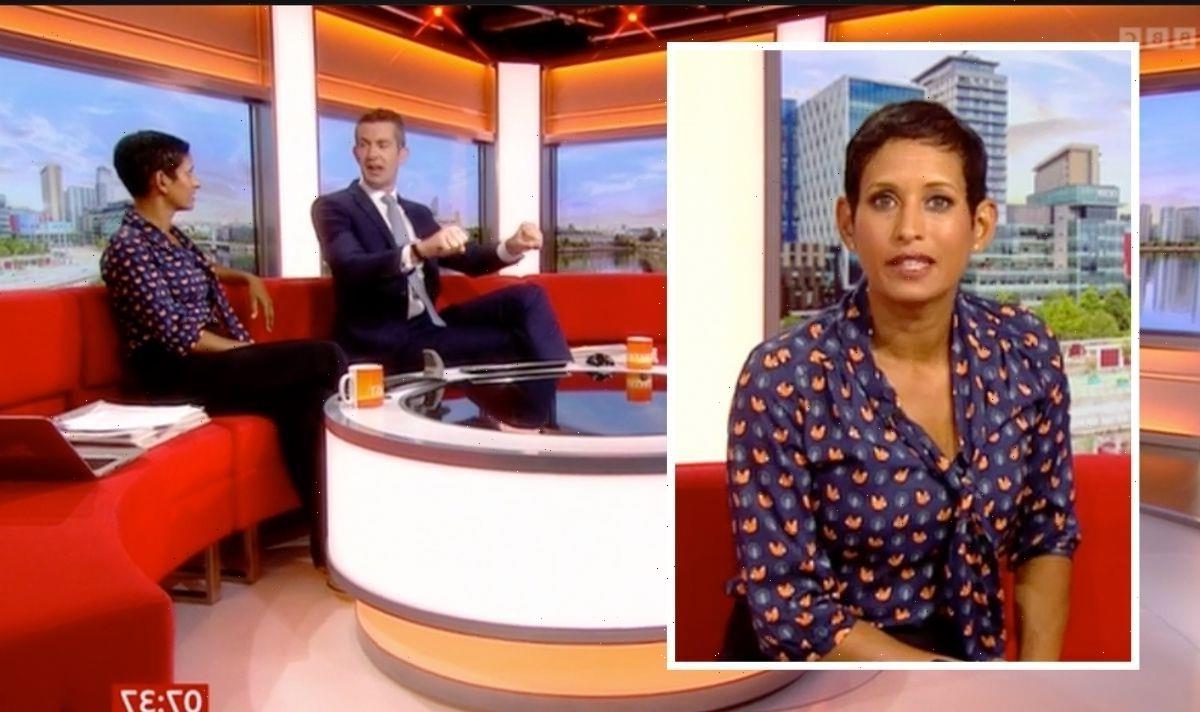 'Not that lazy!' Naga Munchetty swipes at Breakfast co-presenter

BBC Breakfast hosts Naga Munchetty, and Ben Thompson were joined by sports presenter Sarah Mulkerrins on Saturday’s instalment of the show. There to talk about all of the latest sporting news, it was a football stadium breakthrough that sparked a little BBC Breakfast sofa jibe. The pilot of a new “safe standing” campaign at football stadiums saw Ben teasing Naga.

Sarah was joined virtually by Ken Scott who is the Head of Inspectorate, Sports Grounds Safety Authority.

He was there to discuss the new “safe standing” scheme, which was trialed at several major football grounds and has reportedly seen a “positive impact” on matches.

Clubs such as Manchester City, Manchester United, Chelsea and Tottenham have all swapped out a number of seats for standing places in safe areas that have additional railings.

Naga, however, was delighted that not everyone would have to stand when it came to watching her favourite team play.

Read More: Piers Morgan in fresh attack on ITV day before return: ‘They lost their bottle’

After the segment wrapped, Sarah said: ” Very interesting in terms of fans’ experiences and how they may change…”

“So I’m really pleased that you can still sit down. But you are not going to see much if everyone wants to stand, but I quite enjoy the sitting.”

Referencing the moveable bar in the safe standing areas that you can raise to help prop you up when you stand, Ben saw his moment to take a crack at his co-host.

Holding his arms out like using a zimmer frame, Ben added: “To use that bar in front to pull yourself up…”

Pulling a face, Naga hit back and said: “Not that lazy.”

The pair laughed it off and will unlikely be watching a match together anytime soon.

Ken spoke positively about the new safety measures and how fans have relayed that it improved their experience.

DON’T MISS…
Prince Charles ‘at end of tether’ with Harry and ‘was not happy’ about meeting with Queen [LATEST]
Nicole Scherzinger sparks backlash over reaction to Rudy Giuliani on The Masked Singer [LATEST]
‘Throw him over the balcony!’ Eamonn Holmes savages Harry after ‘protecting’ Queen remark [LATEST]

He insisted that it would not affect their experience for loyal football fans.

The seats and railings had to be available at both “home and away matches” and “comply to 16 early adopter criteria”.

This trial has been in place since January 1 this year and will continue to the end of the season to “enhance the experience” for those who may wish to use a mixture of seating and standing while enjoying the game.

Earlier in the week, Naga came under fire from some BBC Breakfast viewers for defending Prime Minister Boris Johnson during an interview.

Discussing partygate during an interview with Liberal Democrat deputy leader Daisy Cooper the presenter seemed to ruffle some fans’ feathers.

Naga interrupted: “You know this is a very explosive accusation to accuse the Prime Minister of lying.

“Let’s be very clear, what specifically do you think the Prime Minister has lied about?”

The pair then went back and forth on the matter.

BBC Breakfast airs weekdays at 6am on BBC One