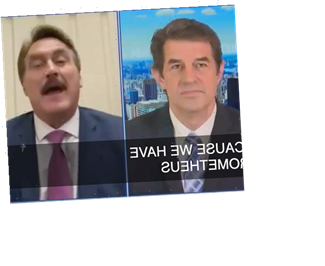 It’s official: MyPillow CEO/conspiracy theorist Mike Lindell is too out there even for Newsmax.

Lindell appeared on the conservative news channel Tuesday, ostensibly to discuss cancel culture in the wake of his being permanently removed from Twitter for repeated violations of its Civic Integrity policy. But when Lindell kicked off the segment by ranting about election fraud, anchor Bob Sellers quickly began speaking over him.

Lindell said that he had “100 percent proof” that Dominion Voting Systems were involved in voter fraud in the 2020 American presidential election, a claim that has no basis in fact and for which Dominion is suing Donald Trump adviser Rudy Giuliani. “Mike, you’re talking about machines that we at Newsmax have not been able to verify any of those kinds of allegations,” Sellers interjected, the statement an about-face from the pro-Trump, election-questioning stance the network assumed throughout 2020.

Lindell kept talking. Sellers did, too. And eventually, after asking producers “Can we get out of here, please?,” Sellers walked off the set, leaving co-anchor Heather Childers to try to salvage the interview.

If Lindell’s stream-of-consciousness paranoia sounds familiar, it might be because he had a similarly contentious interview — that time about unproven COVID-19 treatments — with CNN’s Anderson Cooper in August 2020.

Press PLAY on the video above to watch the chaos unfold, then hit the comments with your thoughts!