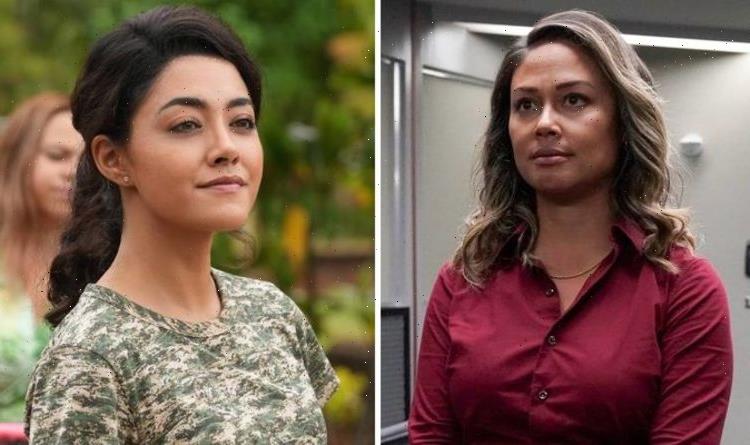 NCIS is one of the biggest and longest-running shows in the world with millions of people tuning every week to find out what happens next. So when NCIS Hawaii was announced, fans were thrilled to see the CBS drama expanding the universe after the likes of the original NCIS, Los Angeles and New Orleans. Actor Kian Talan who portrays Alex Tennant in the series opened up to Express.co.uk about the massive opportunity and his family’s reaction.

NCIS Hawaii is actor Kian Talan’s biggest role to date, having only previously been in a number of shorts.

He is the rebellious son of leading agent Jane Tennant (played by Vanessa Lachey) who is struggling to come to terms with how much their lives have changed.

From his mum busy working at NCIS and his dad starting a new family, Alex has lashed out at his parents throughout season one.

While Alex isn’t exactly getting on with his family, actor Talan was delighted to welcome his real-life dad, step-mum and brother to the set.

Talan’s family visited him in Hawaii during the Christmas period and got a taste of what it was like behind the scenes.

They even got a chance to get in front of the cameras as they appear as extras in an upcoming episode.

Talking to Express.co.uk, Talan said: “So they actually came to Hawaii for Christmas and they’re background actors in an upcoming episode, episode 16.

“They just play people who are walking around in the back but got they got to see the entire process of how we create these episodes and they’re like fangirling over Vanessa [Lachey] like, ‘Oh my God!’

“Because they were fans of Vanessa’s, Filipinos are culturally big fans of other Filipinos in mainstream media so they were like, ‘I need a picture, I’m sweating!’

“So it was great just to have them for this episode.”

Talan, who says his brother looks like the spitting image of him, also opened up on his sibling’s reaction.

He said: “They were so funny and so cute. I’ve never seen my brother so proud of me which was a really good feeling.”

The last time NCIS Hawaii aired was on Monday, January 24, on CBS for Spies Part Two.

Sadly, it’s going to be a while before another new spin-off episode airs.

NCIS Hawaii is taking a break from the small screen due to a schedule shake-up.

CBS is replacing many of its popular shows, including the entire NCIS franchise, during the majority of February.

This is so the network can make room for the Winter Olympics 2022 in Beijing which started on Friday, February 4.

As long as there are no more delays, then episode 16, which will feature Talan’s family, should be released on Monday, March 14, on CBS.

Talan also commented on how NCIS Hawaii has made him more reflective when it comes to how you should treat your loved ones.

He added: “You never really appreciate your parents until you’re older.

“Now when I look at Alex and who he is now and it’s funny because I’m like, ‘stop giving your mum a hard time’.

“But then I have to own it and be like, ‘Okay, wait, what would I feeling if I was Alex in that situation?'”