Carol Kirkwood was on hand to deliver Thursday’s weather report and tell BBC Breakfast viewers the five-day forecast. Before one of her updates, presenter Charlie Stayt spoke about the latest news regarding a robot returning from the moon which piqued Naga Munchetty’s interest, so much so she wanted to know what the weather conditions were like in the location the robot returned to. While it was in Carol’s remit to research and discuss her findings, she was more interested in delivering a forecast for whether people across Britain were going to experience a white Christmas next week.

Charlie began by explaining: “A Chinese spacecraft has returned with the first samples from the moon in more than 40 years.

“The robot craft – which didn’t have any crew on board – spent three weeks in space gathering rocks and soil.

“The spacecraft touched down in the northern region of Inner Mongolia and scientists hope the material will help them understand the structure and history of the moon,” he added.

Naga took over: “Let’s find out from Carol what the temperature and weather conditions were like in the northern part of inner Mongolia this morning. Carol – come on tell me all about it!” 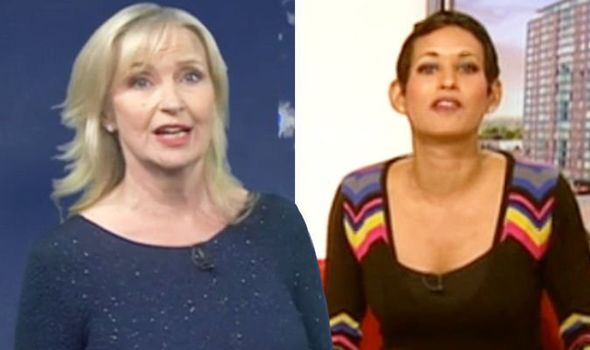 We will use your email address only for sending you newsletters. Please see our Privacy Notice for details of your data protection rights. Louise Minchin snubs Dan Walker as she returns to BBC Breakfast

“I think instead Naga, I will tell you all about the British weather,” the meteorologist hit back.

“This is a short one,” Carol explained in terms of how long her weather report slot was. I’ll have longer weather in about half an hour.

“Good morning everybody, some of us have had some beautiful sunrises this morning. Today is going to be drier and quieter than yesterday, with more sunshine. There are going to be a few showers – but not as many as yesterday and it’s going to be breezy.

“Through the afternoon, the clouds building out introducing some showery outbreaks of rain. Temperature range, eight to about 12, 13 celsius.” 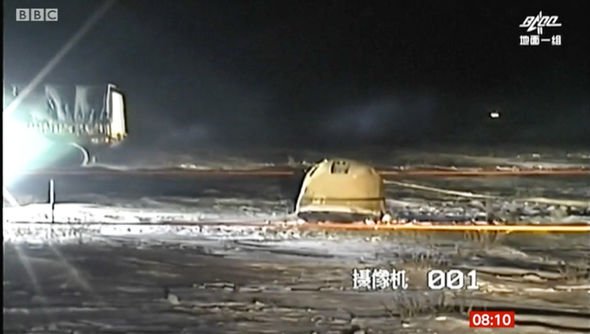 After delivering her report, she crossed back to Naga and Charlie in the studio with Naga remarking: “So Carol, 08:43, 08:44 that’s when we’ll find out what the inner region of Mongolia is experiencing in terms of weather and wind chill factors, etc, etc?”

“I can have a look at this, but, I think we should take a poll on it, whether anyone wants to know Naga,” Carol said.

“Or whether they want to know if it’s going to be cold next week in the UK? Are we going to have a white Christmas perhaps somewhere?”

“Carol, why don’t you do both?” Naga insisted. 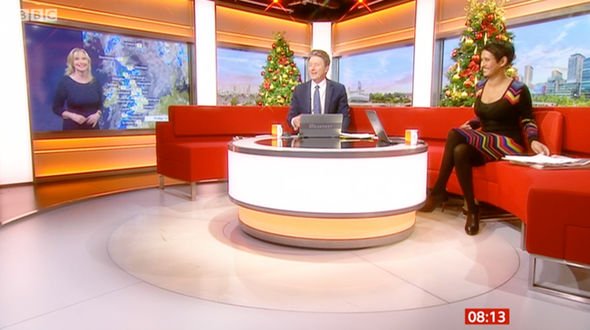 “I believe south Mongolia is very different from the north,” Charlie added.

“You should look into that Carol, it’s something you should know about,” Naga commented. “Of course, it’s there in your brain obviously. I look forward to them both.

Later on in the show, when Carol was back for a longer weather report segment, Naga introduced: “It’s 13 minutes to nine. We need to find out a detailed description of what’s happening with the weather. 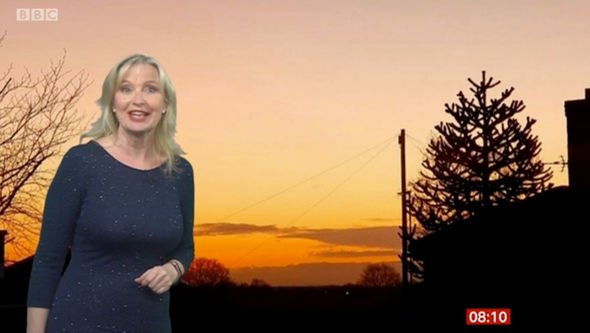 “Carol worked hard on this and Carol enjoys all the extra work that’s passed her way when annoying co-presenters say: ‘Can you tell me what’s it’s like in northern Mongolia please?’”

“Well, I can tell you Naga,” Carol took over. “Good morning everybody. In a place called Ulan Bator, it’s probably the coldest national capital in the world.

Following her report and another update on the British weather, Naga said: “Carol, without this morning, you would have not have known that Ulan Bator is the coldest capital in the world with -31 degrees celsius tonight.”

But the metrologist just stated: “You wouldn’t have known!” causing Naga to fall about laughing.

“What’s the one word up-sum from Kirkwood for -31 degrees celsius. Is that nippy? What is it?” Charlie asked.

BBC Breakfast airs every day at 6am on BBC One.