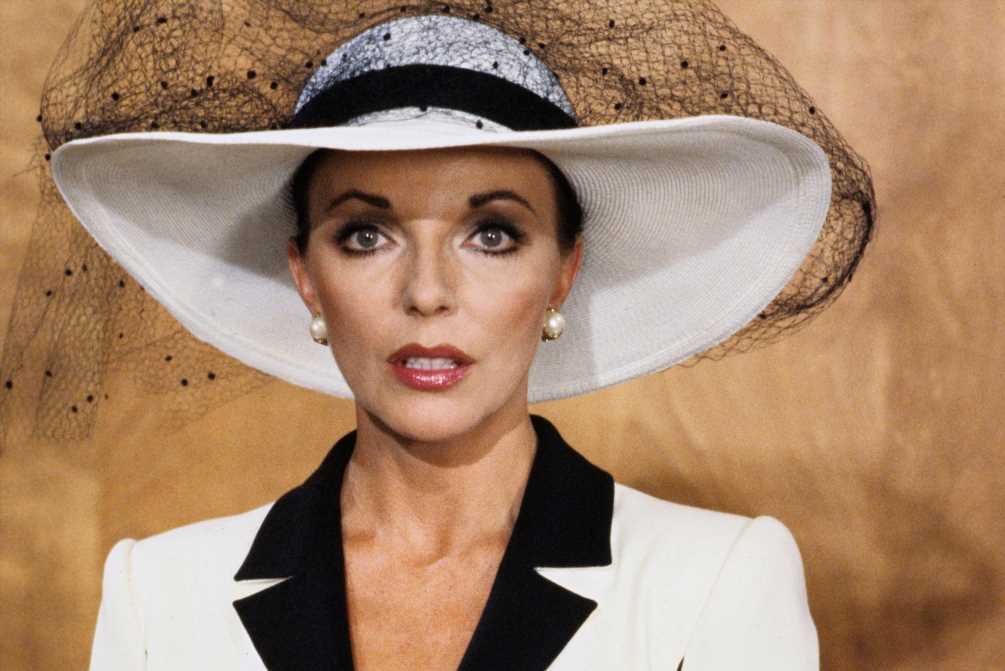 SHE’S gone from sexy Hollywood starlet to British icon, leaving four husbands and a string of famous lovers behind her.

Now Joan Collins has opened up about her life and loves in typically frank and witty fashion for a new BBC documentary, on tonight. 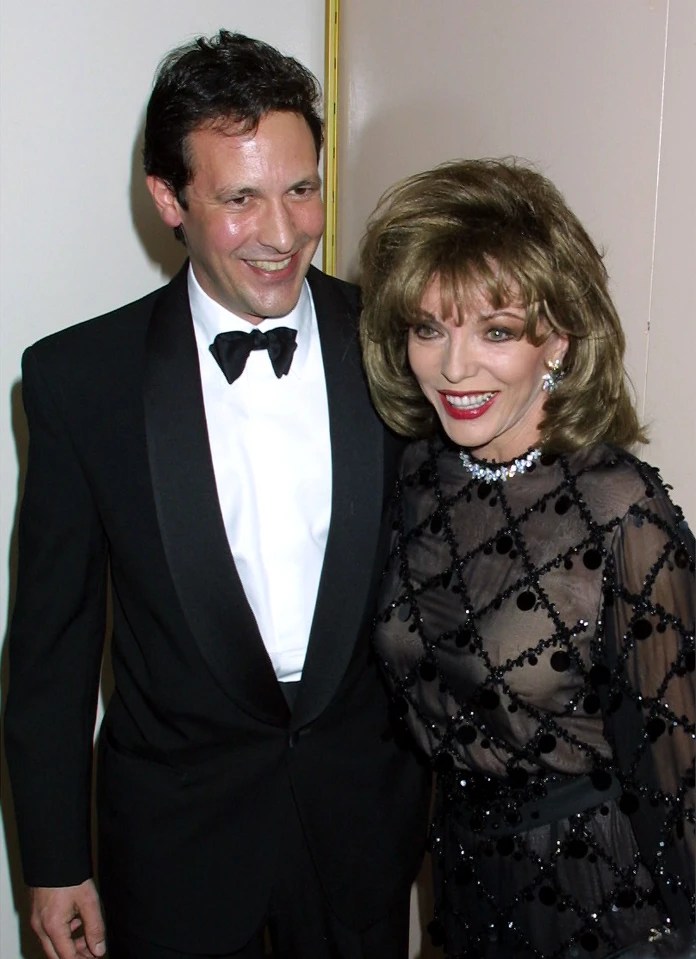 In the feature-length film, This is Joan Collins, the 88-year-old star takes viewers behind the doors of her five marriages, including her misery over cheating husband Anthony Newley, near bankruptcy with addict Ron Kass and the toxic relationship with "sociopath" Peter Holm.

In a shocking revelation she reveals film star Maxwell Reed – who she married out of "shame" after he raped her on their first date – tried to pimp her out to "old rich men" for £10,000 a night.

She also reveals notorious studio head Daryl Zanuck pinned her against the wall in an attempted sex attack.

“Basically I’m a survivor,” she says.

“I survived being a young actress when practically all the men were predators.

“They used to say female stars were finished at 27, but here I am after seven decades in the business to tell you a thing or two about how to survive the perils of the profession.”

Born in Maida Vale, London, Joan reveals growing up with her good-looking, dominant father, and her caring, nurturing mum shaped her desire to succeed in her own right.

“Mum was busy trying to please him all the time and I hated it,” she recalls. “I vowed I’m not going to depend on a man for everything. I have to have my own identity.”

DID YOU SEE IT?

Just 17 when she started landing film roles, she dropped out of the Royal Academy of Dramatic Arts (RADA) and was soon making £300 a week – the equivalent of £10,000 today.

Dad Joe – a successful theatrical agent – was wary of his daughter becoming an actress.

“He didn’t want me to be in showbiz because he knew the pitfalls,” she says. “He said, ‘You’ll be finished by 23 and the men are so predatory’. He knew before the Me Too movement how the men were.”

After landing her breakthrough role, as a rebellious teen in I Believe in You, Joan was introduced to swashbuckling star Maxwell Reed by co-star Laurence Harvey.

Reed – 14 years her senior – was one of the many handsome stars whose glamorous pictures she swooned over as a teenager and she instantly accepted when he asked her on a date.

“The gigantic powder blue Buick drew up outside Bayswater Tube station,” she recalls.

“He had an American accent which was quite odd for a man from South London.

“The next thing I knew I was flat out on the sofa and he was raping me,” she says.

“In those days, my mother would have said I was ‘taken advantage of’. Now we call it date rape.”

Incredibly Joan carried on seeing him and, months later, accepted his proposal of marriage.

“Had I not been so innocent about sex and the way things should be I wouldn’t have done that, but I had a strong sense of guilt, so I did it,” she says.

“The honeymoon was a fiasco. We looked outwardly happy but underneath I was miserable.” 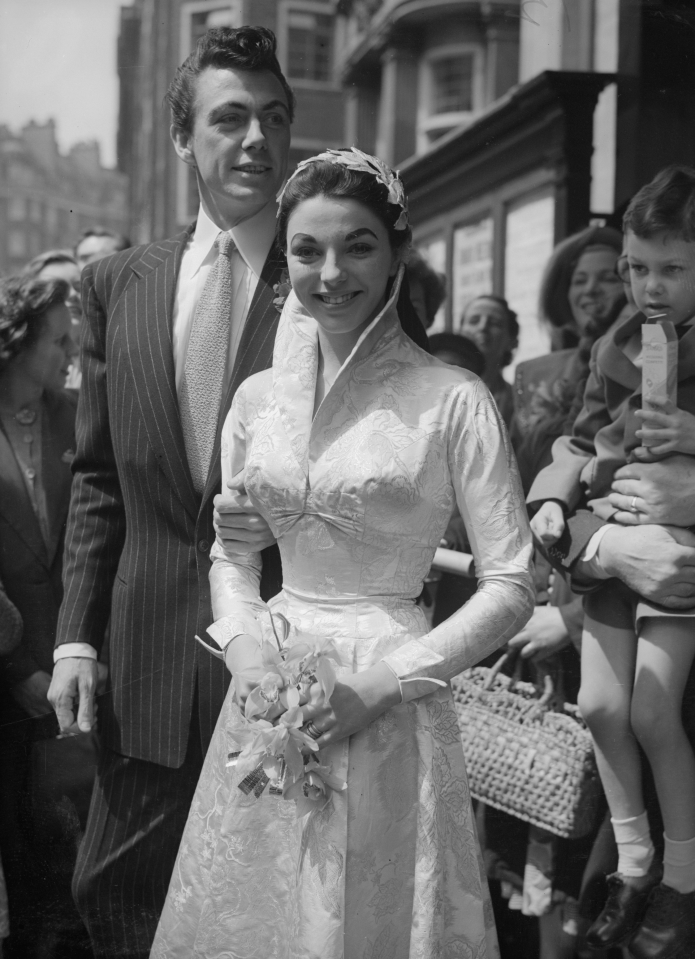 Pimped out for sex

Joan’s star was in the ascendant, with lead roles in Our Girl Friday and Lewis Gilbert’s Turn the Key Softly, as Reed’s appeal waned and the marriage was deeply unhappy.

The final straw came when he tried to pimp her out to a rich Arab Sheikh at London’s chic Les Ambassadeurs Casino.

“He gravitated towards rich old men and that night I found out why,” she says.

A role in Howard Hawks’ Land of the Pharaohs saw Joan flee to Rome – where she had a fling with co-star Sidney Chaplin, son of silent screen star Charlie – before signing a contract with Rank studios, on a weekly salary of £950 (£25,000 today).

Max told me, ‘He’ll pay you £10,000 for one night – and I can even watch’. I looked at my handsome, loathsome husband and began to cry

When she filed for divorce from Reed he demanded alimony of £950 a month, claiming he had “discovered” Joan and that he “deserved” to be supported.

Being groomed for stardom by Rank studios, Joan threw herself into Hollywood life and recalls a party at Gene Kelly’s house where Marilyn Monroe told her to watch out for “wolves” – the predatory studio bigwigs – and especially legendary producer Daryl Zanuck.

It wasn’t long before Joan found out exactly what Marilyn meant.

“[Zanuck] chased me along a corridor and trapped me against the wall,” she recalls.

“He pinned me like a beetle to a board and said, ‘You need a real man honey, a real man’. Luckily a make-up man came down the corridor and I was able to escape.”

She also dubbed legendary Welsh star Richard Burton, her co-star in Sea Wife, a “neanderthal” and a “scalp collector” over his numerous romantic conquests.

“We had onscreen chemistry but then he made the obligatory pass, as most actors do, and he charmingly admitted to me he would ‘bonk a snake if it was wearing a skirt’,” she says

“No way was I tempted although I saw many other women fall like ninepins at his feet. He was known to be a wolf – I’m surprised Elizabeth [Taylor] married him.” 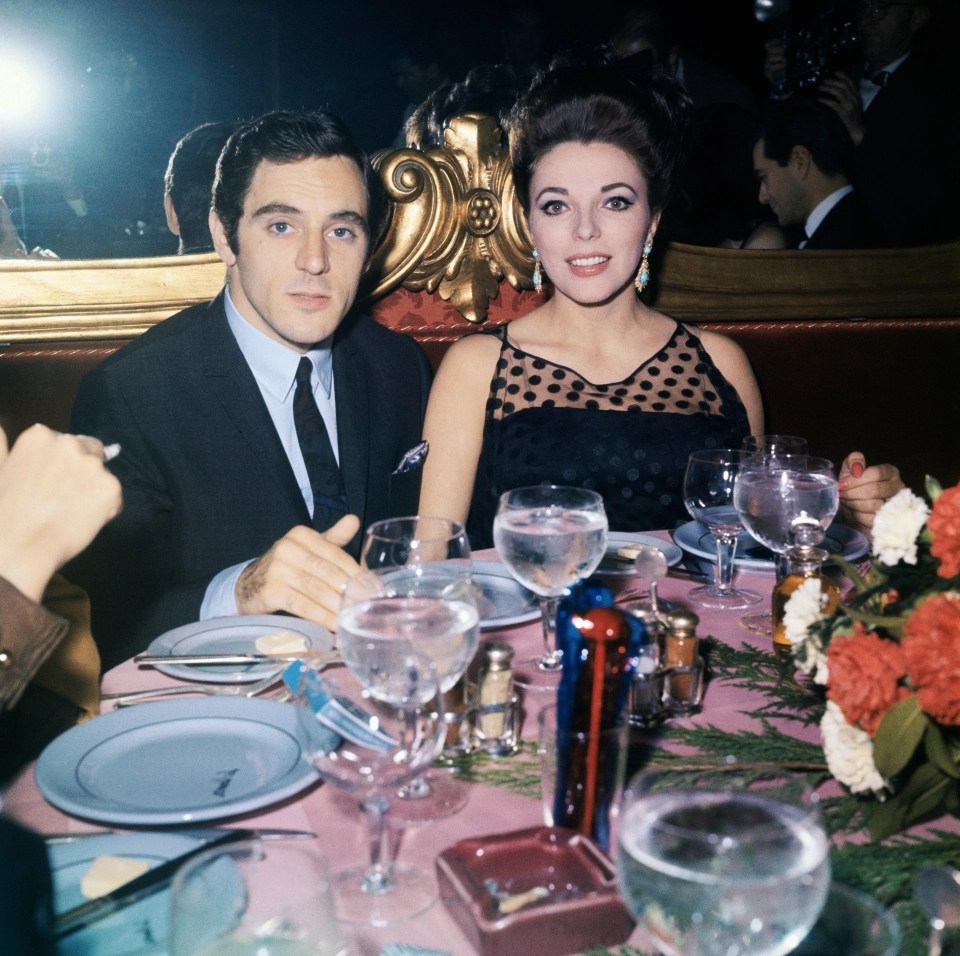 Joanie – as she’s affectionately known – went on to have a romance with Warren Beatty, then a struggling actor, before meeting British pop star Anthony Newley, the father of her two children Tara and Alexander, now 58 and 56.

They married in 1963 but Newley was frequently unfaithful and the pair, who were living in Los Angeles, slowly drifted apart.

She admits to cheating with Ryan O’Neill, when Newley failed to come home for her birthday, adding: “A girl should get what she wants on her birthday.”

The largely autobiographical movie depicts the hero, played by Newley, torn between a young blonde and the mother of his children, played by Joan herself.

“He was spelling out the death of our marriage,” she says.

“I realised he’d been having affairs since the day we married, and now he was blatantly making a movie about all the women he’d bedded. I was shattered.”

Divorced after six years of marriage, Joan wed third husband Ron Kass – then head of the Beatles’ record label Apple – in 1972, and the couple had a daughter, Katy.

After landing the role of a studio head, Kass moved the family back out to LA, but when the job fell through, Joan was forced to take on B-movie horror films, including the Empire of the Ants – now a cult classic.

The family were so broke, Joan once queued for an unemployment cheque – before fleeing when the cashier recognised her and asked for an autograph.

The star’s luck changed when she starred in the screen adaptation of sister Jackie Collins’ bestselling novels, The Stud and The Bitch, which became huge successes. 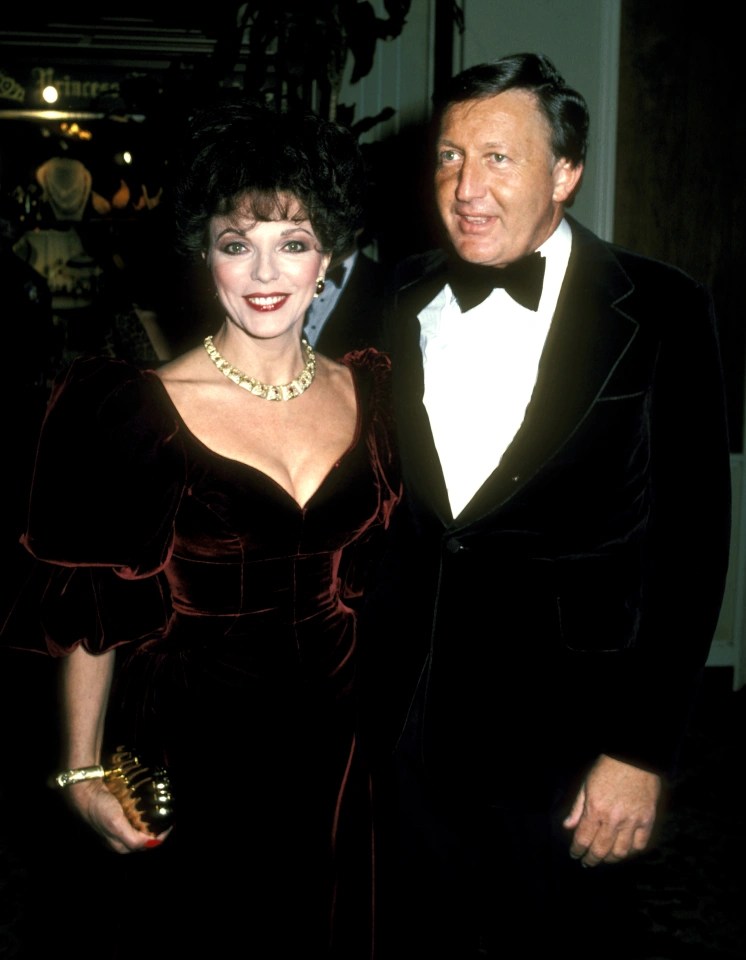 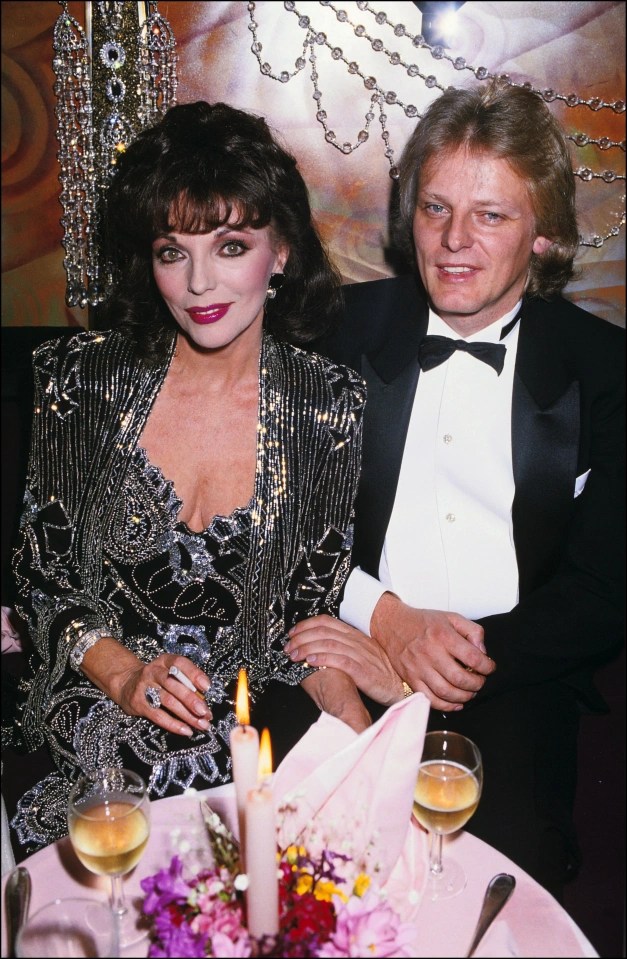 But her world was rocked when Katy, then nine, was hit by a car and suffered a catastrophic brain injury in 1980.

“I was told she was going to die and she was in a coma for a long time,” she says.

“Eventually she started to make little sounds and then she took her first faltering steps. She was going to be alright.

“Katy’s accident was the worst thing that had ever happened to me.”

As Katy recovered, Joan found a sack of unpaid bills in Kass’s desk and discovered he’d taken out a huge loan on the LA house.

Left almost bankrupt, Joan’s fortunes took a turn when she was offered the role of Alexis Carrington in Dynasty – which she only took because she thought the LA sunshine would be beneficial to Katy’s recovery.

She reveals tensions on set, particularly with Blake Carrington actor John Forsyth, who was left fuming when she posed naked for Playboy in 1983.

“It had beautiful people, beautiful clothes, beautiful sets, real flowers and real anger on set – from some of us,” she says.

Joan was also furious when she discovered Forsyth was being paid a much bigger salary for the show, and she managed to negotiate a £20,000 a week rise – taking her salary to £1.5million.

Divorced from Kass in 1983, Joan was now a huge star and Scandinavian singer Peter Holm, her next “big mistake”, was keen to exploit that.

The pair met at a party and he wooed her by singing but, after they wed in 1985, he became increasingly controlling, firing her agents and claiming 20 per cent of her income as her "manager".

It must seem pretty pathetic that a successful woman in her prime should allow herself to be so bullied. The trouble was I was far too stubborn to admit I’d made a terrible mistake

“None of my friends liked him but I stupidly didn’t listen,” she says.” I allowed the Swede to take over my life.

“His anger was venomous and whenever we had fights he would sneer sarcastically, ‘If only people could see the great Alexis now.’

“It must seem pretty pathetic that a successful woman in her prime should allow herself to be so bullied. The trouble was I was far too stubborn to admit I’d made a terrible mistake.”

The pair split after two years and Holm locked himself in their Hollywood mansion, threatening to shoot anyone who tried to evict him. He demanded £50,000 a month but, after bitter court wrangle, was awarded a lump sum of £60,000.

After a rollercoaster ride of a life, Joanie is now content with fifth husband Percy Gibson – 32 years her junior – who she met in 2000 when he managed a theatre production she was in.

“The fact that I was older didn’t matter to us,” she says. “It was giddy, it was fantastic and Percy and I fell madly in love.

“I’ve finally found my true soulmate. And my husband forever."

Now a dame, Joan is still the epitome of style and glamour and says her public persona has always belied the hard times she’s been through

“I know I’ve had a lucky life but I’ve also had my fair share of disaster and unhappiness,” she says.

“There have been miserable, horrible divorces, the terrible situation when my daughter almost died, bankruptcy, almost, not getting any work as an actor. A lot.

“But who wants reality? There’s already too much of it in today’s world, that’s not what the public pay for.”

This is Joan Collins airs on BBC2 on January 1 at 9pm. 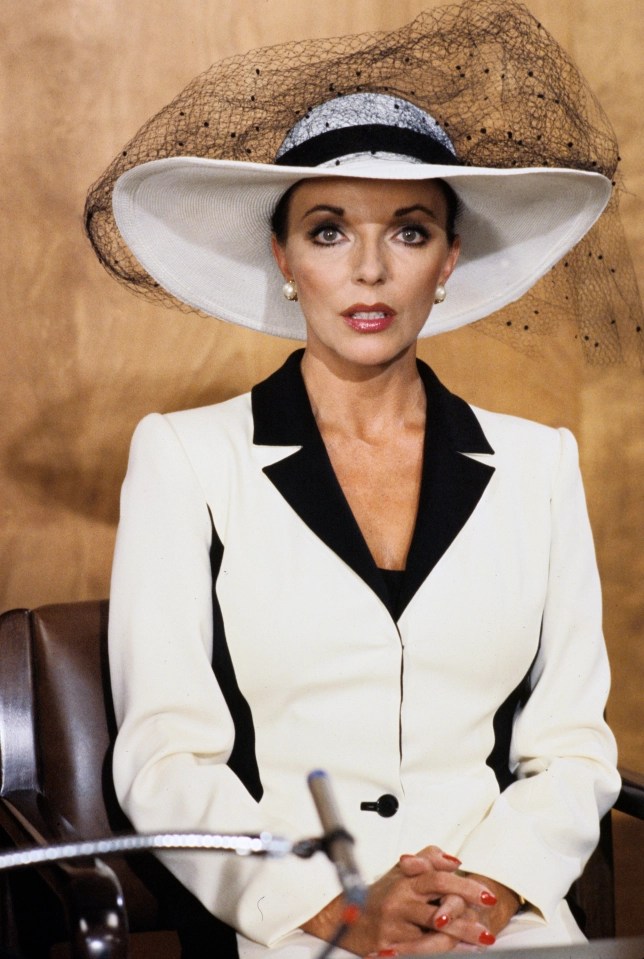