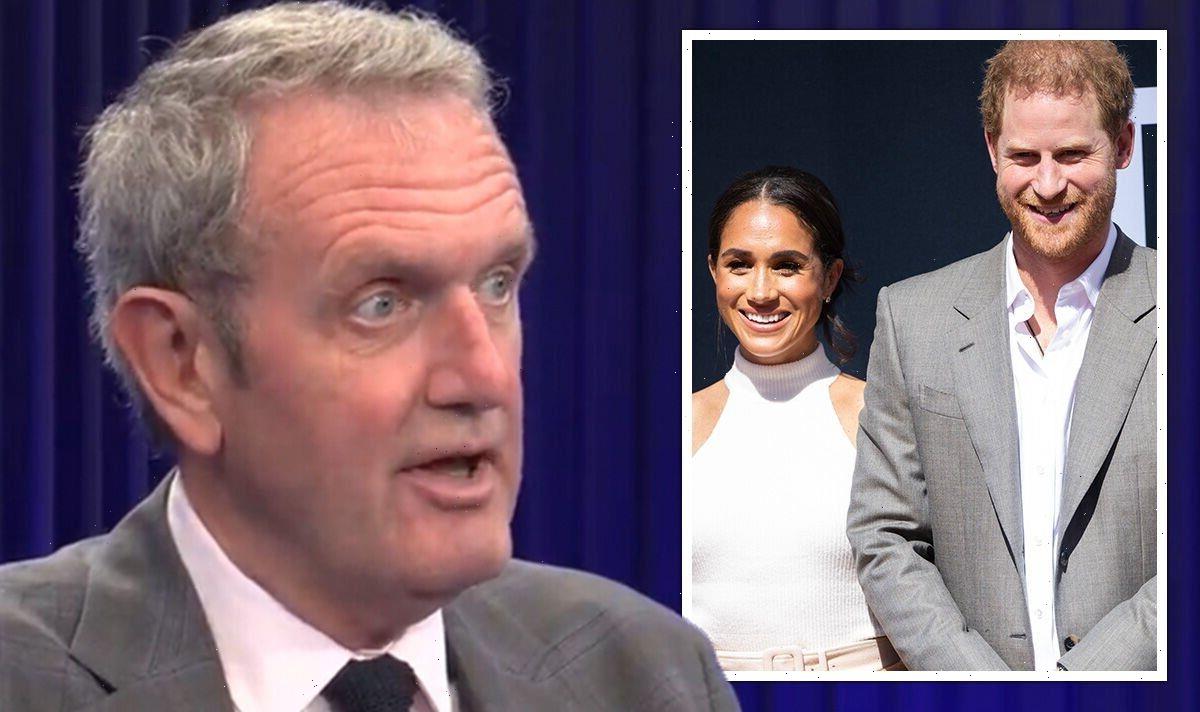 Valentine Low opened up about his tell-all book Courtiers with Dan Wootton on GB News on Thursday. He discussed the allegations made by royal staff members as he argued he “couldn’t pass judgement” on the claims of those who worked with Meghan Markle and Prince Harry.

Dan asked the royal expert if he was concerned about the “legal implications” of publishing his book.

Valentine replied: “Well, you’re always going to be concerned about the legal aspect, but this wasn’t my first rodeo.

“I’ve been there before with the bullying story when I documented how the allegations of bullying have been made against Meghan by her home communications secretary and that I spent a long time working with The Times’ lawyer making sure it was legally watertight.”

He claimed: “We had the email that was sent up the chain in Kensington Palace making the allegation so we worked very hard in conjunction with the lawyer making sure that was watertight.

Read more: ‘They need the money’ Harry and Meghan ‘stuck’ over Netflix deal

“Before we published, the Sussex lawyers Schillings were very aggressive, they sent us all sorts of letters, threatening, denying everything making all sorts of accusations against us.”

“After publication, not a whisper,” he added.

Dan referenced incidents documented in the book but Valentine made it clear it wasn’t for him to declare whether bullying had taken place.

“This actually feels like a full-throttle campaign of bullying over a number of months by Harry and Meghan based on what you’ve written,” the GB News host questioned.

“That’s what people who were on the receiving end believe it I can’t say whether it’s bullying Dan cause I wasn’t there,” the writer claimed.

“Bullying, it’s a very loaded word and one person’s bullying is another person’s firm management style.

“I can’t pass judgement on it, but I know that several people were quite broken, working there.

“When you hear about people saying at the time that when they’re about to have a meeting with Meghan, they’re very worried about how it’s going and when they say things like, ‘I’m shaking, I feel sick,’ it’s not a good workplace.”

Dan then spoke about Meghan and Harry’s interview with Oprah Winfrey where the couple opened up on their struggles with mental health and their reasons for stepping down as senior royals.

Talking to the BBC, she said: “What bullying actually means is improperly using power repeatedly and deliberately to hurt someone, physically or emotionally.

“The Duchess of Sussex absolutely denies ever doing that. Knowing her as I do I can’t believe she would ever do that.”

When the bullying allegations came to light, Buckingham Palace confirmed an investigation paid for privately by the Queen would take place.

A palace spokesperson at the time said: “Members of staff involved at the time, including those who have left the household, will be invited to participate to see if lessons can be learnt.

“The royal household has had a dignity at work policy in place for a number of years and does not and will not tolerate bullying or harassment in the workplace.”

The palace subsequently decided against publishing the report from the inquiry into the allegations.