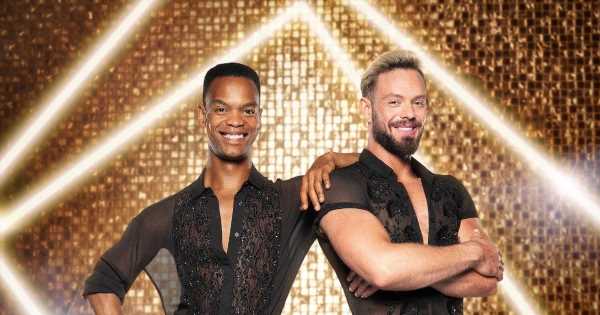 Strictly Come Dancing viewers were over the moon when the show returned to our screens with Tess Daly, Claudia Winkleman and the rest of the gang.

But now there’s even more reason to be excited because the dance partnerships have been unveiled – and there’s some great pairings set to brighten up our Saturday nights on the countdown to Christmas.

The all-star group then took to the dance floor in front of the judges for an amazing group number.

But who is partnered up with as they battle for the famous glitterball commences? Here, we meet the class of Strictly Come Dancing 2021.

Olympic swimmer Adam may have met his match in talented taskmaster Katya. But will they make a gold-medal worthy partnership?

Bubbly TV presenter AJ was thrilled to be paired with Strictly newbie Kai, who has previously impressed on shows like Ireland’s Dancing with the Stars and Britain’s Got Talent.

At 6 foot 6, it's no surprise that BBC Breakfast host Dan Walker was partnered with one of the tallest female pros, Nadiya.

The Crown actor Greg will be hoping for an award-winning performance alongside longest-serving professional Karen.

For the first time in the show’s history, Bake Off star John and fan favourite Johannes will dance in an all-male partnership.

Comedian, Loose Women star and OK! columnist Judi could be having the last laugh alongside Italian pro Graziano.

Former Coronation Street actress Katie is hoping for rave reviews when she performs next to Gorka.

Ex-EastEnders star Nina is ready to give it her all on the dance floor under the watchful eye of her pro dancer Neil.

CBBC presenter Rhys is hoping to bring lots of fun to the BBC studios as he dances with pro Nancy.

Funny man and actor Robert and Dianne could be a couple of watch out for as the competition progresses.

EastEnders’ Rose, who is already a front runner with the bookies, has been matched with Giovanni.

Dragons’ Den star is going all in for her partnership with the longest-serving male pro Aljaž.

Tilly is in good hands with another new pro, six-time Latin and Ballroom National Champion Nikita.

Tom is hoping Amy will be his ‘Star Girl’ as they start the dancing competition.

Could it be a third win in a row for reigning champ Oti as she pairs up with former rugby player Ugo?