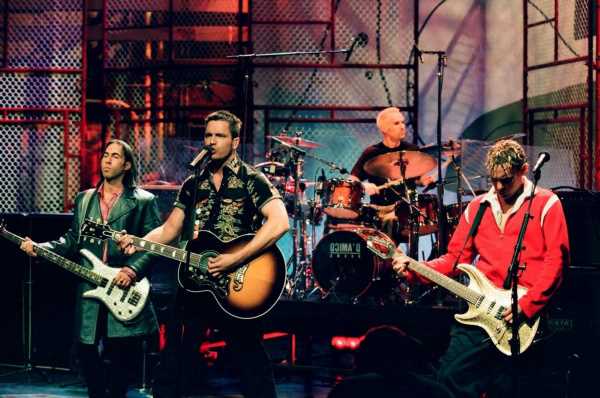 Marvel unleashed a new supervillain on Hulu this weekend as Marvel’s M.O.D.O.K. premiered May 21. The stop-motion animated show brings the big-headed hovering villain to life with the voice of Patton Oswalt, and you wouldn’t even have to watch many episodes to get the Third Eye Blind reference.

Episode 2 of Marvels M.O.D.O.K. features the ’90s band prominently. M.O.D.O.K. co-creator Jordan Blum was on a Television Critics Association panel for the Marvel show during which he spoke about getting Third Eye Blind on board for the episode.

Blum and Oswalt developed Marvel’s M.O.D.O.K. The acronym stands for Mental Organism Designed Only for Killing, and the show features much gratuitous killing. It also shows M.O.D.O.K.’s home life where he’s no superhero, let alone a supervillain.

“There wasn’t really much pushback from Marvel,” Blum said. “They kind of let us do our own thing. I think, maybe once or twice, they reeled us in a bit. But, they knew the show that we were trying to make, and they encouraged it. So we pushed it as far as we could.”

Episode 2 features M.O.D.O.K. traveling through a time portal. In the past, he sees his date with wife Jodie (Aimee Garcia) at a Third Eye Blind concert. Therefore, Third Eye Blind music plays a lot in the episode.

“Not only did we clear it, they appear in the episode in puppet form,” Blum said. “And, we use a lot of their music in it as well as a fun little cover that I don’t want to spoil yet, but it is a love letter to the music of my youth. I love them, and they are heavily featured and happy to be in it, I assume. I don’t know. Maybe.”

His obscurity makes him funnier

Marvels M.O.D.O.K. will be many fans’ first exposure to M.O.D.O.K. He’s appeared in comics, but not as prominently as Dr. Doom or Kingpin. Blum and Oswalt are having fun with M.O.D.O.K.’s inferiority complex.

“There’s this humor already built into the character of this megalomaniacal supervillain with a huge ego, who has this selfdoubt that kind of creeps through,” Blum said. “And it drives him, and it makes him want to be taken seriously and want to be seen as something more. So having this as the basis of who this character was in the Marvel comics and then being able to explore that with his family and how he’s seen at work, it kind of just lent itself to this type of show.”