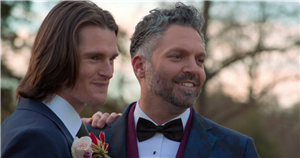 Married At First Sight UK 's Daniel and Matt left their fellow contestants delighted on Wednesday night as they explained that their absence was due to being held up on honeymoon.

The other couples had been questioning the duo's whereabouts and had even started to fear that they had quit the E4 reality dating show after failing to show up at the explosive reunion dinner party.

However, at the end of the evening, Morag received a phone call off Daniel where he explained what had happened and sweetly declared that he and Matt, who are MAFS UK's first-ever same sex wedding, are "smitten kittens".

As Morag answered her phone, she said: "Hello, Daniel? Let me put you on loud speaker, we need to know everything! Daniel, what is going on?"

Daniel then admitted: "I have something to tell you, I am not coming to the dinner party. Matt is not coming either, listen, we will tell you all when we see you next."

The couples started to panic as they predicted bad news for the duo, however, Daniel had been teasing them as he then excitedly declared: "Just so you know, we're being held up on honeymoon and everything is good."

Daniel sweetly added that they are the "dream team" and "smitten kittens" as the contestants at the dinner party celebrated the happy news.

Prior to the call, Morag had pointed out: "Hey guys, guys, one second. Where's Daniel and Matt?" to which the other contestants replied: "They've left, 100% they've gone. They've definitely left."

With an upset Morag continuing: "Where are they? They should have been here by now!"

Speaking on camera away from the dinner party, Morag and Luke spoke about their shock over the missing couple.

Luke said: "I love Matt and I hear a lot of good things about Daniel," with Morag adding: "I love Daniel so much. That's really sad…"

Commenting on the situation further, Luke continued: "I just hope they turn up, it's not good news though."

However, despite the worries, it was a happy outcome as the couple are just held up on their honeymoon and still part of the show.

It comes after it was reported that Nikita Jasmine has been kicked off the show following an outburst at her fellow cast members.

Married At First Sight UK runs Monday to Thursday nights at 9pm on E4. Catch up on the series so far on All 4.

For more juicy gossip on your favourite stars, Married at First Sight UK and the couples,sign up to our daily newsletter here