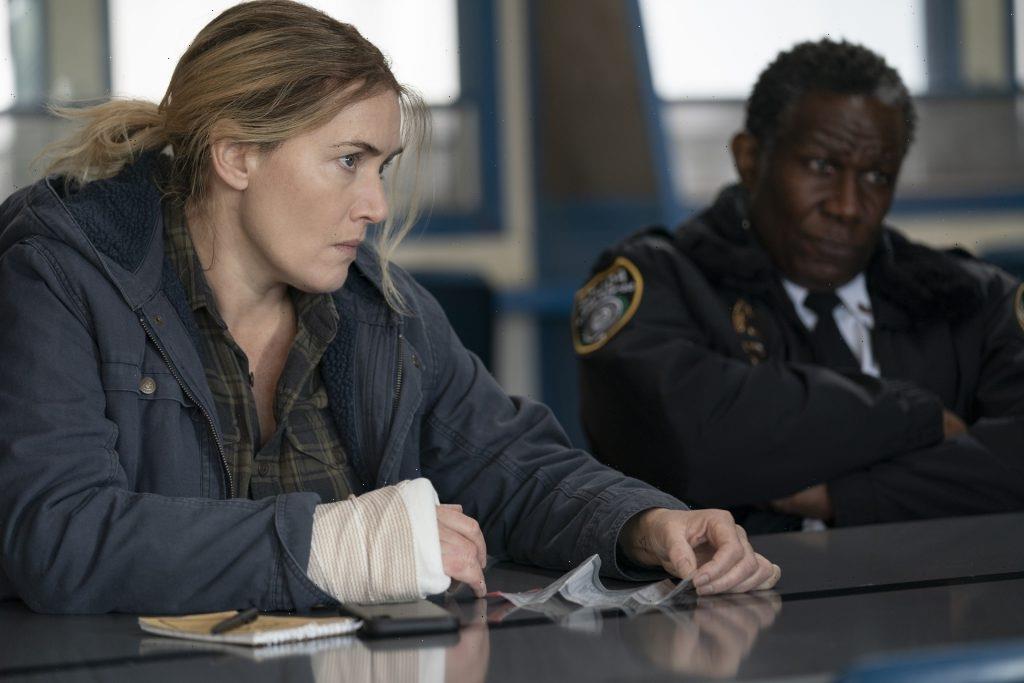 The new HBO series is ramping up to a dramatic ending with the Mare of Easttown Episode 6 recap. In “Sore Must Be the Storm,” Mare Sheehan (Kate Winslet) gets closer to the truth behind Erin McMenamin’s (Cailee Spaeny) murder. However, it might be more complicated than it seems.

[Spoiler alert: This article contains spoilers from Mare of Easttown Episode 6, “Sore Must Be the Storm”]

‘Mare of Easttown’ Episode 6 recap: Mare Sheehan is a hero

Mare Sheehan woke up in the hospital to her entire family worried about her in the opening scene of Mare of Easttown Episode 6. Meanwhile, Katie Bailey (Caitlin Houlahan) was reunited with her mother, Dawn (Enid Graham), and young daughter after being locked in an attic for one year.

However, Detective Colin Zable (Evan Peters) died in the rescue of the two missing girls. After leaving the hospital, Mare visited Colin’s mother to apologize to her. However, the mother smacked her in the face and told her never to come to see her again. Mare went home to her mother, Helen Fahey (Jean Smart), and cried hysterically. Luckily, later in the episode, Dawn thanked Mare for returning Katie to her. The two women embraced each other.

Meanwhile, the police interrogated Deacon Mark Burton (James McArdle) about Erin McMenamin’s murder. He admitted that he tossed her bike in the river. They placed him under arrest for tampering with evidence. However, viewers think the deacon is too prominent of a suspect to be the one who killed Erin.

Later, Chief Carter (John Douglas Thompson) told Mare that he believed that the two cases were unrelated. Katie’s kidnapper had an alibi for the night of Erin’s death. The chief also invited Mare back to work. Before she jumped back on the case, Richard Ryan (Guy Pearce) came by to visit Mare with a gift basket full of hoagies and Rolling Rock. However, she admitted to him that she went on a date with Zable. He agreed to wait until she was ready to date him again. Viewers still wonder if he has something to do with the case.

Was Dylan involved in Erin’s death?

In Mare of Easttown Episode 6, Brianna Delrasso (Mackenzie Lansing) called for Mare to talk to her. She told the detectives that Dylan Hinchey (Jack Mulhern) wasn’t home the night of Erin’s death. They called Dylan down to the station to make a formal statement. He reiterated that he left the woods at 11:45 and went home to bed with Brianna. However, he also admitted that he couldn’t sleep that night and drove around smoking weed.

Later that night, Dylan tracked down Jess Riley (Ruby Cruz). He told her that they are joined together forever and wanted to know if she told the detectives they burned Erin’s journals. Jess ran away, but Dylan caught her and told her that he would kill her if she opened her mouth again, like Erin.

Mare’s daughter, Siobhan Sheehan (Angourie Rice), told her girlfriend, Anne Harris (Kiah McKirnan), that the University of California, Berkeley wanted her to fly out for an interview. Anne told Siobhan that she should follow her dreams.

However, later in Mare of Easttown Episode 6, Siobhan got worried when Anne didn’t answer her calls or texts. She got drunk and went out with her friends. When they returned her home to Mare, Siobhan was drunk and yelled at her mother that she shouldn’t have been the one to find her brother dead.

How did Mare’s son, Kevin, die?

Mare returned to her therapist even though the department didn’t require her to be there. She admitted that she’s panicked by the public’s expectation of her to be excellent. The therapist told her she’s hiding behind other people’s grief, and it will still be there once the cases are solved.

Mare finally talked about her son, Kevin’ Sheehan’s (Cody Kostro), death. The day he died, the neighbors called Mare because they saw him hanging around. Frank Sheehan (David Denman) wasn’t around, but Siobhan was at a nearby friend’s house, so she sent her daughter to check on Kevin. However, Siobhan called Mare hysterical. Viewers got a flashback when Mare ran home and found Kevin in the attic hanging from a beam. She cut him down and held him until the paramedics arrived.

Freddie left a new clue with his death

Meanwhile, Freddie Hanlon (Dominique Johnson) hadn’t answered his phone for three days, so his sister, Beth Hanlon (Chinasa Ogbuagu), called Mare to come by and check out the situation. When Mare found Freddie, he was dead with a needle in his arm. In the room, she found a pile of Erin McMenamin’s clothing.

The shirt she found in Freddie’s room with “The Ross Family Reunion” in May was the same date as the necklace that Erin kept hidden. Erin stayed in a cabin with Billy (Robbie Tann) and her father that weekend. Later on, Mare of Easttown Episode 6 viewers found out that Erin and Billy began a relationship that weekend.

Many people are related in Easttown. Mare isn’t related to her best friend, Lori (Julianne Nicholson), but Lor is related to many characters. Her husband, John Ross (Joe Tippett), who is sleeping with Sandra again, is Billy’s brother. John is also cousins with Kenny McMenamin (Patrick Murney). So, Erin and Billy are related, making their relationship incestuous, according to the people of Easttown.

Did Billy kill Erin in ‘Mare of Easttown’?

Later that night, in Mare of Easttown Episode 6, John Ross’s father told him to sit down. He admitted that Billy came home late the night of Frank’s engagement party. When he went downstairs to check on his son, Billy was in the laundry room, and there was blood everywhere. They found Erin the following day.

When John confronted Billy about what happened, he admitted that he killed Erin. John told his wife, Lori, and asked her to keep the information from her best friend, Mare. Billy told John that he was ready to confess; however, John suggested that they go fishing again one last time on the Lehigh River. When Billy packed his fishing gear, he hid a gun inside the tackle box.

Meanwhile, Mare visited the local jewelry store to find out who purchased Erin’s engraved necklace. The owner remembered that the girl came back to the store to try to sell the necklace back. It was purchased on June 15, 2017. Immediately after finding out the information about the necklace, Mare went to Lori to ask where Billy was, so viewers assumed that the jeweler confirmed Billy bought the necklace. When Mare went to talk to Lori about Billy, she admitted that Billy was TJ’s father. Erin threatened to tell everyone, so things got heated, and he killed her.

Could Carrie get custody of Drew Sheehan?

When Mare went to see her ex-husband, Frank, he admitted that Faye (Kate Arrington) went to stay at her mother’s house since the paternity test. Mare told Frank that their grandson, Drew, went happily with his mother, Carrie. The custody lawyer told Frank they could lose their grandson as early as the summer. Meanwhile, Carrie fell asleep while Drew was playing in the bathtub. Luckily, when she woke up, he was only holding his breath.

‘Mare of Easttown’ Episode 6 recap: What’s in the photo?

Later in Mare of Easttown Episode 6, Jess came to the police station to tell them that she burned Erin’s journals. She also handed over what looked like a photo. Chief Carter demanded that they get Mare on the phone after seeing the picture. However, the last scene of Mare of Easttown Episode 6 only showed Mare walking in the woods near the Lehigh River to find Billy and John.

In the Mare of Easttown Episode 7 trailer, Mare falls into the Lehigh River while pursuing Billy, who she believes to be Erin’s killer. In another clip, she says, “I just had a subject flee from me.”

“She obstructed a murder investigation,” Mare also says in the Mare of Easttown Series Finale trailer. However, viewers don’t know whether Mare is talking about Jess or someone else.

How does ‘Mare of Easttown’ end?

According to IMDb, the Mare of Easttown Finale airs on HBO on May 30, 2021, at 10 p.m. EST. Viewers finally found out the truth about Erin’s killer and what involvement Billy and Dylan had in what went down in the woods.