Made in Chelsea returned to E4 on Monday night (October 22) and there was a major surprise in store for frequent watchers of the show.

During Louise Thompson and Ryan Libbey’s engagement party, fan-favourite Binky Felstead made her comeback to the programme. 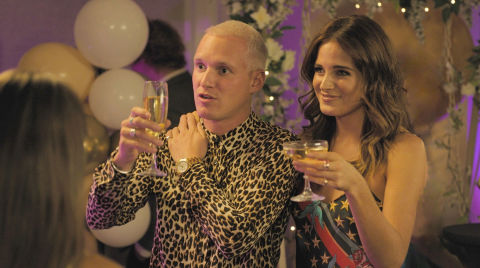 The reality star has not been a series regular since 2017, having left the show after falling pregnant with Josh ‘JP’ Patterson’s baby.

Blown away by her surprise return, viewers announced their delight on Twitter.

One fan tweeted: “Binky!!!! So good to see @BinkyFelstead on #MadeInChelsea, even if it is fleeting.”

While another wrote: “Im so glad Binky has made a appearance I miss her being on the show so much.”

Elsewhere, Sam gave a desperate speech at the engagement party as he tried to convince Habbs to give him another chance.

“Sometimes I ask myself: does love exist?” said Sam. “Will I ever find it? Then I look at the happiness Louise and Ryan have and I know it does. And it makes me want to find someone who I can make that happy and love. And I genuinely believe that’s you [Habbs].”

But Sam didn’t get the response he was hoping for, leading many fans to deem the situation ‘awkward’ and declare their embarrassment for him.

Made in Chelsea airs on E4.