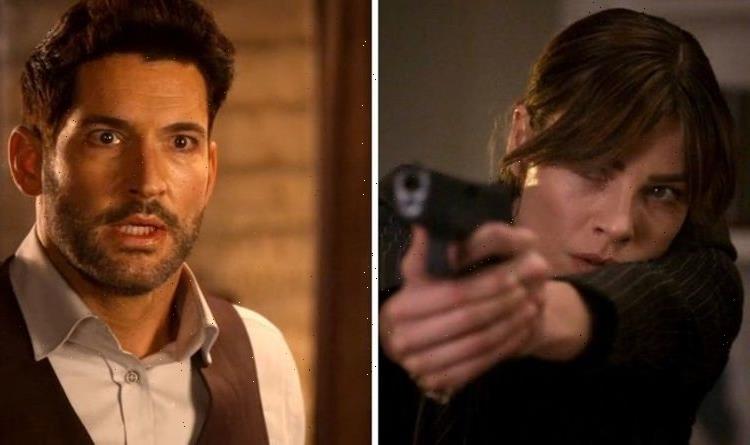 Chloe Decker (played by Lauren German) is embracing her dark side in the brand new trailer for the final season of Lucifer. Set to be released on Netflix in September, the first footage of the last ten episodes of the Biblical drama caused a social media storm when it dropped on YouTube and Twitter.

Lucifer Morningstar (Tom Ellis) is under attack from his own girlfriend in the thrilling first trailer for Lucifer season six.

After finding a new lease of life as a civilian consultant for the LAPD, the crime-solving devil has one more case to solve; ‘The Murder of Lucifer Morningstar’.

‘Lucifans’ finally have some context for the so-titled fifth episode of the new season, which raised some red flags in the fanbase when it was revealed late last year.

However, the footage shown at the end of the latest trailer has only managed to raise more questions.

Following a montage of Biblical action, musical numbers and even a Looney Tunes-inspired animated sequence, Chloe and Lucifer appear to engage in a fight to the death.

Somehow, the mortal detective overpowers the immortal fallen angel, pinning him to the floor.

“I certainly did not see this coming,” says a fearful Lucifer with a knife pointed directly at his chest.

The end of the trailer has already become the series biggest new talking point as viewers try to figure out what’s sent Chloe over the edge.

New villain Rory (Brianna Hildebrand) will be trying to take her older brother’s throne for herself, but Lucifer’s greatest threat could be slightly closer to home.

Of course, fans immediately set about speculating why Chloe could have turned on her partner so unexpectedly.

On Reddit, one user suggested: “The easy answer is that it’s not really Chloe, or that isn’t really Lucifer.

“We may know the new angel’s name, but we don’t know what her angel power is. It might be shapeshifting.”

Portrayed by Deadpool star Brianna Hildebrand, the actress will be portraying another ‘Teenage Warhead’ in Rory, Lucifer’s anarchic younger sister.

So far, all we know about the sinister new foe is that she’ll be following in her brother’s rebellious footsteps, potentially to take over Hell from its new Queen, Mazikeen (Lesley-Ann Brandt).

Her arrival seems to have caused chaos in the mortal realm, as someone or something is causing reality to bend out of shape.

Could Rory be imitating Chloe with reality-altering powers to get a closer shot at Lucifer?

This certainly seems to be the most popular theory at the moment, as several fans came to the same conclusion when the trailer was released on Twitter.

“I’m so confused too!” one shocked viewer exclaimed. “Why is Chloe’s voice sounding different and why is she trying to kill him?”

They continued: “[Lucifer] was truly scared so she wasn’t playing around.

“Only thing I hope is it’s just an episode where the universe is off or it’s the new girl that can body change or something. So lost but excited.”

With Chloe and Lucifer both leaving their jobs at the LAPD, fans should expect much more supernatural goings on in the last ten episodes of the Netflix hit.

Viewers certainly weren’t prepared to see their favourite couple turn on each other, but hopefully ‘Deckerstar’ manage to work out their differences in time for the series finale.

Lucifer season 6 will be released on Friday, September 10 on Netflix.