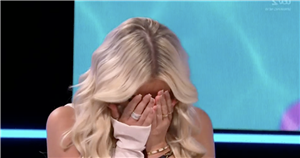 Love Island star Lillie Haynes was left squirming after she was quizzed over Jack Grealish on the live reunion show.

Lillie, 22, set tongues wagging as she was spotted chatting to footballer Jack, 25, at a party after he liked a few of her bikini snaps on her Instagram page.

As she sat alongside the series winners Millie Court and Liam Reardon following an awkward reunion with the pair, she was quizzed by Laura on being spotted with Jack.

Host Laura, 36, asked of footballer Jack, who is dating Sasha Attwood: "I wanna know where you're at because I've spotted some pictures, yes I've seen them. Jack Grealish, what's going on?"

Lillie then shook her head and quickly buried her head in her hands before laughing.

Laura giggled and asked the audience: "Who said: 'Oh my God?' We saw pictures, what's going on?"

Blonde beauty Lillie continued to blush and insisted: "Nothing! Nothing!"

Laura didn't stop there as she continued to quiz Lillie over snaps of her and Casa Amor lad Jack Barlow, after they were spotted holding hands.

"We saw pictures of you with another Jack as well – Jack from Casa Amor…" Laura said.

Lillie then giggled as the camera cut to Jack, who awkwardly wiped his forehead as he looked away.

Laura joked: "I'm great with the questions aren't I," which was met with laughter from the Islanders.

"I was just thinking maybe you could all go… Like you and a Jack and Millie and Liam, what do you think, go on a double date?"

Welsh lad Liam said: "Yeah let's go for it" as he let out an awkward laugh and Millie giggled next to him.

Geordie lass Lillie then joked: "Maybe a few more shots and we'll get there!"

Jack is dating his childhood sweetheart Sasha Attwood. The couple first met when they were 16 and have been together since.

Laura's line of questioning didn't go down well with viewers, who branded the questions as "inappropriate" and "disrespectful".

One wrote: "Was defo inappropriate for Laura to ask Lillie about Jack Grealish on live tv he has a girlfriend …. #loveisland".

Another added: "Imagine Laura Whitmore mentioning Jack Grealish to Lillie on LIVE TV when Jack Grealish has a bird, how disrespectful #LoveIsland".

While a third said: "Bit awkward of Laura Whitmore who has pleaded for paps to leave her alone in the last to say to Lillie, "We've all seen the pictures, what about Jack Grealish" #LoveIsland".

And another added: "Eerrr why is Laura Whitmore quizzing Lillie on live tv about Jack Grealish has absolutely no one got respect for his girlfriend ahahahah".

For the latest showbiz news and updates, sign up to our daily OK! newsletter.