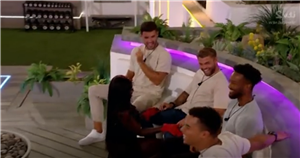 After prior speculation that Jake Cornish has a thing for Kaz Kamwi over his own partner Liberty Poole, fans of Love Island have gone wild with the latest heart rate challenge drew Jake’s eye to Kaz.

As the latest challenge had the Islanders trying to get each other’s heart rate racing with sexy costumes and dance, viewers took to Twitter to speculate about Jake’s primary interest.

Kaz came out wearing a black corset and red gloves, rubbing up against the guys and trying her best to get everyone going.

Viewers spotted Jake grinning wide and staring at Kaz, with one saying: “No joke I think Jake fancies Kaz #Loveisland”

A third chimed in: “did y’all see the way jake was looking at kaz #loveisland”

When Jake’s partner Liberty came out dressed as a sexy cowgirl, Jake kept his hands to himself, leaving his hands resting on the side as Liberty came over to give him a kiss at the end of her show.

As the boys got their chance to put on a show themselves, Jake was seen taking Liberty to the floor for a variety of sexual positions, but the part fans noticed most was that before his show with Liberty, he went straight to Kaz.

Grinding on Kaz and running her hand down his chest, fans were shocked, with one saying: “JAKE…AND KAZ, OMG #Loveisland”

Another said: “jake enjoying himself with kaz a bit too much I see #loveisland”

A third wrote: “Jake if you’re secretly in love with kaz…just say that #loveisland”

Fans had initially began to speculate after a number of occasions tipping them off to the possible feelings, with tonight’s challenge setting them off once more.

While Millie ended up being the one to raise Jake’s heart rate the highest, she had managed to win over most of the guys in the villa with her sexy Lara Croft inspired outfit and tease.

A photo from the villa had initiated the fan belief as it showed Liberty, Jake and Kaz together, with Liberty sat on Jakes knee and Kaz by his side, with Jake’s arm around Kaz and his hand placed on her thigh.

One fan had commented: "This photo is making me scream! Jake deffo likes Kaz!"

For the latest Love Island news, make sure to sign up to OK!'s daily celebrity newsletter and Factor 50