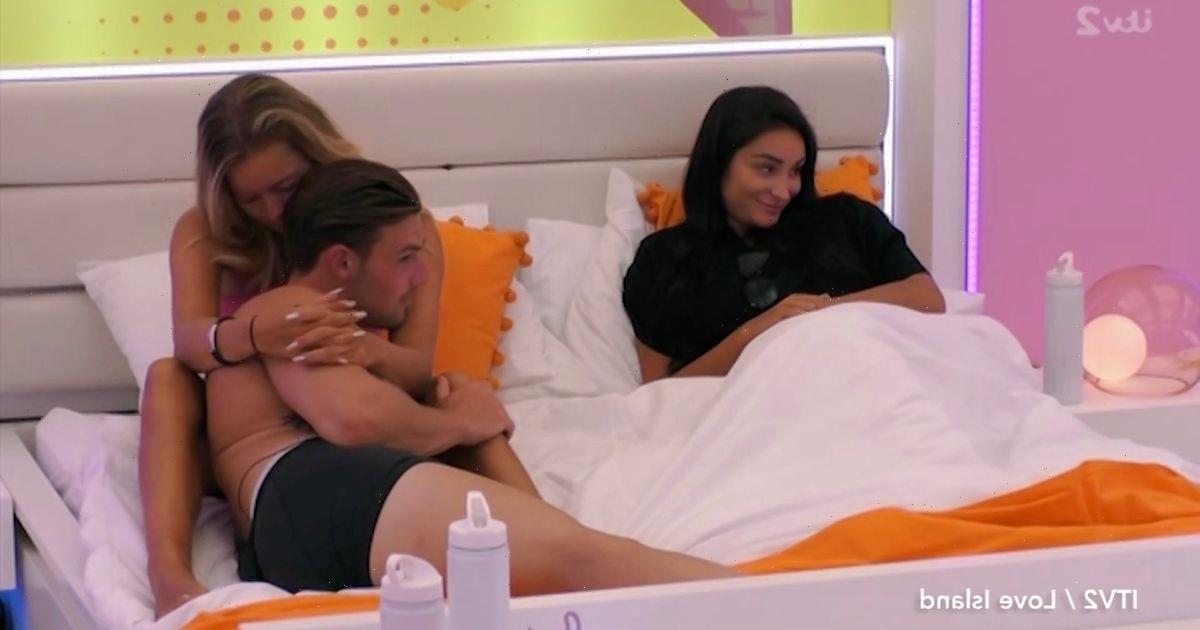 In Casa Amor, Andrew, 27, was convinced that Tasha, 23, wasn’t interested in him, so he started getting close to newcomer Coco Lodge, 27.

However, when the two villas came back together, Andrew decided to rekindle his relationship with Tasha and ditch Coco.

In Wednesday night’s episode though, Coco – who is still technically coupled up with Andrew – had an awkward moment as she was stuck lying next to the pair as they cuddled up and kissed.

Fans of the ITV2 dating show rushed to Twitter to share their shock at the uncomfortable situation.

“Not Coco just lying beside Andrew and Tasha necking on,” one wrote, as a second echoed: “Not Andrew, Coco and Tasha all being in the same bed.”

As another fumed: “Andrew kissing Tasha whilst in bed with CoCo?? MEN CAN KILL.”

A lot of viewers felt for Coco as she had to witness their intimate moment just days she and Andrew were kissing in bed during Casa Amor. It seems she saw the funny side though, as she broke into a smile at the surreal situation.

A fourth said: “No because imagine how uncomfortable Coco feels whilst Andrew and Tasha are all cozy and sweet talking next to her, quite sad really.”

“Andrew and Tasha canoodling right in front of coco… what happened to decorum and compassion?” another asked.

Despite packing on the PDA, Andrew and Tasha have had a turbulent relationship throughout the show making several u-turns on their on-off relationship.

On Tuesday night, Tasha revealed she wanted to give her relationship with Andrew another chance and he was thrilled by the news and leant in to give her a smooch.

But when she was in bed with Billy – her partner from Casa Amor – later that night, she started crying and admitted that she was worried that Andrew would hurt her again.

Prior to getting back with Andrew, she also returned his ring through Luca.