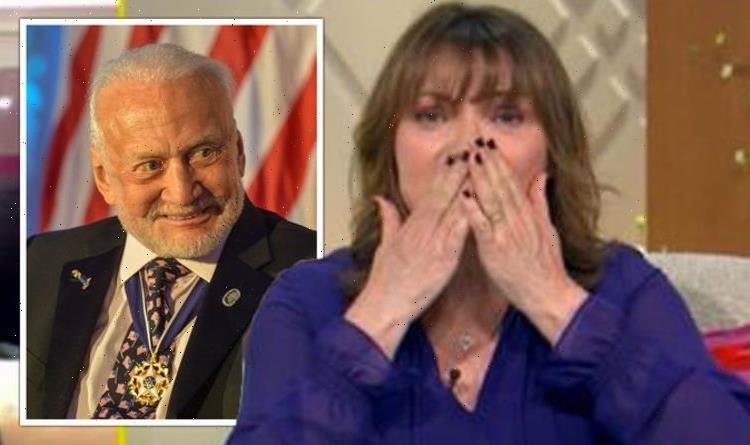 Richard Branson joined Lorraine for his first UK interview following his flight into space at the weekend. The ITV host was full of praise for the businessman and his venture comparing him to the likes of other space hero like Buzz Aldrin and Neil Armstrong. However, she was left red-faced when she confused the two astronauts, accidentally killing off Buzz.

Covering her mouth with her hands, Lorraine gasped: “Oh, sorry!”

It came as Richard explained he’d spoke to Buzz before going up into space.

“That was incredible because as a teenager I looked up at the moon when Buzz Aldrin was literally on the moon and Neil Armstrong, and that’s really what inspired me to do this program in the first place,” he revealed.

“Plus, a phone in programme on English telly when somebody asked me the question, ‘Would you ever want to go up in a spaceship?’

Richard Branson on 'devoting' his life to tackling global issues

“But Buzz is 91-years-old and it was obviously a great honour that he rang straight after the flight.”

Also in the interview, Richard spoke about how vital his trip into space was in order to protect the planet.

He told Lorraine: “That is one very important part of it. One other part is space already transforms our lives back here on Earth.

“Some people don’t realise the phones we use and this satellite link between us today is to do with space.”

Richard added scientists are able to complete experiments with the use of Virgin Galactic.

“We’ve had scientists up doing tests,” he detailed. “Virgin Galactic goes to a place in the air that balloons can’t reach.

“Scientists are really excited they can do experiments and be in space when they do it.”

Responding to claims he is competitive with others racing to get into space, Richard said he was supposed by Elon Musk before his flight.

“Elon was a real gent turning up and coming with his child to wish us well and watch the flight,” he shared.

“Jeff I wish him all the best in a week’s time. Jeff’s programme, Elon’s programme and our programme will make a difference.

“I haven’t liked the ‘old billionaire’ thing. I think what we are doing is creating things we can be proud of, make a difference and pay the bills at the end.”

Lorraine airs weekdays on ITV at 9am.