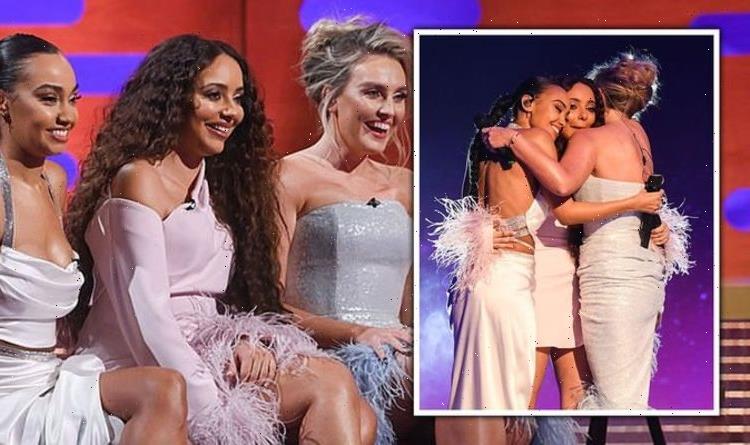 Little Mix stars Jade Thirlwall, Perrie Edwards and Leigh-Anne Pinnock will perform on The Graham Norton Show on Friday moments after announcing they will be taking a break from being a pop group. The pop stars break down on the pre-recorded show as they open up on their decision to “recharge and work on other projects”.

Although the BBC show airs on Friday, it’s filmed the night before and came minutes after Little Mix confirmed their break.

Little Mix insisted they were not “splitting up” but “felt it is the right time to take a break”.

The band made the announcement at 6.07pm and the recording for The Graham Norton show began at around 6.15pm.

Jade, Perrie and Leigh-Anne were invited to perform and were seen comforting each other on stage.

The girl group then sat down with Graham to discuss their recent announcement.

Jade says: “It’s been terribly emotional. We’ve still got the tour next year and a few other bits.

“But it’s been 10 incredible years and we always said if we’re going to take a little break it would be on an incredible high, at our peak so it seems like the right time.

“We are family and love each other to bits so what’s lovely is that whatever we go off and do we can support each other through it and celebrate each other – it’s a lovely way to do it.”

Leigh-Anne adds: “It’s time to spread our wings a little bit and do our individual things.”

Earlier this year, Little Mix were the first girl band to win the Brit Award for British Group.

Discussing their victory, Perrie remarks: “It was about time a girl group won.”

When they won the award, Jade dedicated it to “all of the incredible female bands”.

On Thursday, the band tweeted: “We feel the time is right to take a break so we can recharge and work on some other projects.

“We wanted to let you all know that after the Confetti tour in April/May next year we are going to be taking a break from Little Mix. It’s been 10 amazing years, a wonderful non-stop adventure…

“We feel the time is right to take a break so we can recharge and work on some other projects. We can’t thank you enough for your love and never-ending support since the beginning. We love you all SO much.

“We are not splitting up – Little Mix are here to stay. We have plans for more music, tours and performances in the future.

“We’ve made so many incredible memories with you all, and we can’t wait to make so many more.

We’re sisters and we’ll always have each other and you, the fans, in our lives. Little Mix is forever, see you on tour!”

The Graham Norton Show airs on BBC One on Friday at 10.35pm.