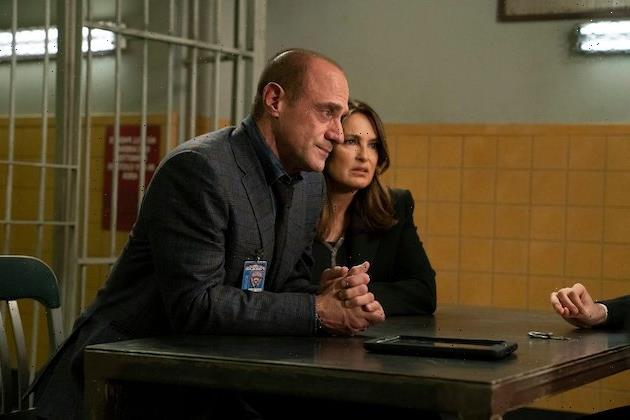 The last time Olivia Benson and Elliot Stabler spent more than a few minutes together, he blurted out an inopportune declaration of love and then bolted from the room, and she stopped taking his calls. So of course, we were more than a little intrigued to see how things would go when they had to be in each other’s company for Wednesday’s two-hour Law & Order: SVU and Law & Order: Organized Crime crossover.

INTERVENTION AFTERMATH | The case of the week involves high-end call girls who get their marks drunk and drugged before they rob them of cash and credit cards. After one guy — a billionaire who happens to have been involved with Kat’s cousin, Lily — dies after his night with the ladies, SVU is called in to investigate. Medical examiner Melinda Warner (love to see her!) theorizes that there’s a bad batch of drugs going around.

“Yes, yes,” you’re saying, “but when is Stabler going to show up?” In the parking garage outside the ME’s office, as it turns out. At the start of the hour, we saw that Olivia screened his calls for all of a nanosecond before calling him back, but he didn’t pick up. Now, he’s asking her to reach out to her connections within the department to find out about the investigation into Kathy’s death, because he’s (rightfully) being blocked from getting too involved. “I can’t,” she says. “You have no idea how many people are telling me to stay away from this, to stay away from you.” He’s shocked, SHOCKED at that. But she’s got something else on her mind.

“Elliot, did you hear anything that we said to you the other night?” she asks softly, but he quickly replies that he doesn’t want to talk about the intervention. She begs him to slow down, eat something and get some rest. “You have to do this for yourself. For your kids,” she says. Unsaid: “FOR MEEEEEEEEE.”

WHAT REALLY HAPPENED TO SIMON? | Remember how Olivia told Stabler to find his chill? Well, prepare for her to lose every single bit of hers. When another guy turns up dead of seemingly the same cause (an overdose of street drugs) at the same hotel where Olivia’s brother also overdosed, Benson comes to a conclusion: “Simon was rolled, Fin,” she says. “He was murdered.”

Melinda points out that the mix of drugs in Simon’s body wasn’t exactly the same as the recent victims. The officer who investigated Simon’s death tells Liv that he still had all his cash, credit cards and his watch — unlike the recent victims. Still, she is determined to prove the connection.

And when another guy gets rolled and leads them to one of the women, Liv & Co. find a selfie on the woman’s tablet that proves Simon and one of his high school friends were with her the night he died. Simon reached out to the friend, looking for a job, and they wound up doing drugs together. “I couldn’t help Simon, so I thought I could change his mood, show him a good time,” the guy says. Long, sad story short: The guy called the blonde woman, whom he knew from a strip club, and she and some friends brought some potent new drugs with them to party. The next morning, the women were gone and Simon was dead. “So you just left him there, alone?” Liv wonders. The guy stammers that he called 911, and adds the incredibly unhelpful caveat that “Simon died happy. He had one last good time.”

ARE LIV AND EL OK?! | After the SVU crew brings in all three of the women involved in the overdoses, Melinda delivers some news: the drugs in the dead guys’ systems were a knockoff of Purple Magic — the drug Organized Crime has been tracking for a while now. So that brings Stabler, Fin and Benson back to Hotel Moulin, where he tells them about Richard Wheatley’s connection to the drug. They theorize that someone cut this batch with too much fentanyl, and a video on one of the women’s phones not only gives them their next link in the chain — Felix, the guy helping the ladies procure the drugs — but also stops Olivia short when she realizes that Simon is facedown, tied to the bed and likely dead in the video.

Eventually, Kat and Fin get Felix in the interrogation room and he agrees to wear a wire — but it’s too late. His connection is suspicious about why the police just let him go… and then he is shot while Liv and Stabler sit in a stakeout car — which is also hit by gunfire — just a few feet away.

Now it’s your turn. What did you think of the episode? Sound off in the comments!