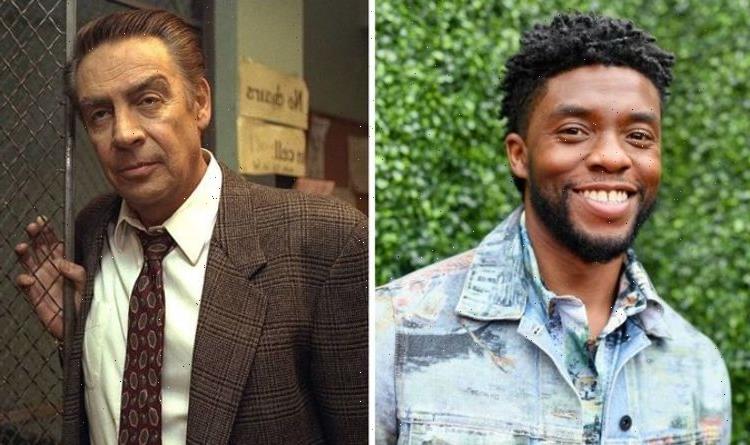 Law and Order returned for season 22 earlier this year where Elliot Stabler (played by Christopher Meloni) made a brief comeback. This acted as a backdoor pilot for his new spin-off Law & Order: Organized Crime which began shortly after. The NBC series has been a fan favourite for more than three decades, including with some well-known celebrities.

WARNING: This article contains spoilers from Law and Order.

Viewers have been treated to numerous guest star appearances throughout all the Law and Order series.

As repeats are often shown on NBC, fans can sometimes be left surprised when they see who pops up on their screens in the middle of an episode.

This time around, it was Black Panther actor Chadwick Boseman who guest-starred.

When was Chadwick Boseman in Law and Order?

Actor Boseman featured in season 14, episode 16 of Law and Order which originally aired in 2004.

The synopsis for the episode entitled Can I Get A Witness? reads: “A small-time drug dealer is shot dead in front of her friends, but when the key witness later dies, will the detectives nail their suspect?”

Boseman portrayed Foster Keyes, the prime suspect in the murder investigation when the officers discover it was drug-related, tracing back the supply to him.

Keyes hides at his girlfriend Jannette Richards’ house but when he is taken in for questioning, he is quickly picked out of a line-up by the witnesses.

Keyes denied being the murderer but later on the murder weapon and a quantity of cash are found at his home.

Greene (Jesse L. Martin) and Briscoe (Jerry Orbach) discover that he hired someone else to be the triggerman and have the victim murdered.

The case went to trial but despite the team’s best efforts, Keyes was found not guilty on all charges.

This decision shocked the prosecution as Keyes was able to walk away scot-free.

Boseman shot to fame when he played Reggie Montgomery in the soap opera All My Children, a role which was taken over by actor Michal B Jordan who became his Black Panther co-star.

He went on to feature in Persons Unknown, 42, Get on Up as singer James Brown and Marshall as lawyer and future Supreme Court Justice Thurgood Marshall.

The entertainment industry and Marvel fans were left in disbelief though when he died last year.

Boseman had been battling Stage III colon cancer since 2016 but kept the secret regarding his health until his death.

He died in August last year before his final film Ma Rainey’s Black Bottom came out on Netflix.

Law and Order is available to watch on NBC.