The Vanderpump Rules pregnancy pact was legit! What seemed like a joke agreement between Stassi Schroeder, Katie Maloney-Schwartz, Brittany Cartwright and Lala Kent is now (almost) in full effect, with babies on the way for Stassi, Brittany and Lala.

“It was real!” Lala exclaims to ET over video chat, alongside her fiancé, Randall Emmett. “It sounds so cheesy, but I have always been hell bent on having my children grow up the way that I did, which was very much, like, my mom was friends with all my friends’ parents and it was so much fun. I had a great childhood.”

The pact came to be when the four couples traveled to Mexico together a couple of years ago, when Lala and Randall gifted Jax Taylor and Brittany a group trip for their engagement. The women intended to hold off on getting pregnant until after all their weddings happened, but the coronavirus pandemic changed that. Lala and Randall pushed their April nuptials to July 2021, and Stassi and Beau Clark’s Italian wedding, originally set for October, has seemingly been postponed indefinitely. It was actually Stassi who put the pact in motion.

“I’m talking to her and she smiles and says, ‘I’m pregnant,’ like, y’all need to get it poppin!” Lala recalls. “So, I called Rand and I was like, “It doesn’t matter when the wedding is happening, we’re yanking my IUD out!'”

Randall says Lala was pregnant within 16 days of Stassi announcing her own pregnancy news with their friend group, which she shared publicly in June. It turns out Lala was just days away from learning she was pregnant when she sparked breakup rumors in July after archiving every photo of Randall on her Instagram and posting a cryptic message to social media, which turned out to be an Alcoholics Anonymous prayer. At the time, Lala was upset with Randall over putting groceries away, a small argument that blew up due to Lala’s self-admitted hormone-fueled emotional state.

“That was a week literally to the day before she found out,” Randall notes, to which Lala chimes in, “Yep, now we know why!”

Lala and Randall then announced their baby news via their podcast, Give Them Lala… With Randall, in early September. Brittany and Jax went public with their pregnancy soon after, and likely conceived around the same time as Randall and Lala, as both ladies are due in April 2021. Stassi and Lala are expecting girls, while Brittany will welcome a boy.

My baby boy is going to have 2 cuties from the start. 😂🥰 I love you girls! So happy we get to go through this journey together. 💙💝💝

My baby boy is going to have 2 cuties from the start. 😂🥰 I love you girls! So happy we get to go through this journey together. 💙💝💝

Randall predicts that Tom Schwartz and Katie will be pregnant before the end of the year, setting the stage for Vanderpump Rules’ ninth season to be all about babies, if there’s a ninth season at all. The future of the series is still up in the air. First, the pandemic halted production, especially inside restaurants in Los Angeles, the main setting of the show. Then, Bravo parted ways with two key cast members this spring, Stassi and Kristen Doute, after past racially insensitive actions taken by both women resurfaced amid the Black Lives Matter movement’s surge in the wake of George Floyd’s death.

Stassi recently appeared on Tamron Hall’s daytime talk show to discuss her departure from the Bravo series, confessing that even if given the chance to return to the show, she would say no. The 32-year-old said she can’t reconcile being a mom and being on a reality show that’s largely based on feuding with friends. It’s a sentiment Lala shares. The Give Them Lala beauty founder tells ET, she hasn’t decided yet if she’ll return to Pump Rules.

“I need to see what next season would entail,” she admits. “I need to make sure that’s a healthy space for me. I don’t get to think just about what’s good for Lala and how she would react to certain things, you know? I’m going to be a mother. … I have my own child looking up to me, so it would have to be the right situation. It’s a different zone now. Brittany and I are becoming moms, I just don’t see me walking into SUR clapping back at Danica [Dow] for serving me the wrong meal, you know? A lot is going to change.”

Lala says, for now, she’s waiting for an official “go” from production to make the decision whether to walk away or stay. The cast still has no idea when or if they’ll film again (rumors seem to be circling around a January start date for filming, though). Once there’s a firm date, Lala will talk with the powers that be to decide if the show is still the right place for her. 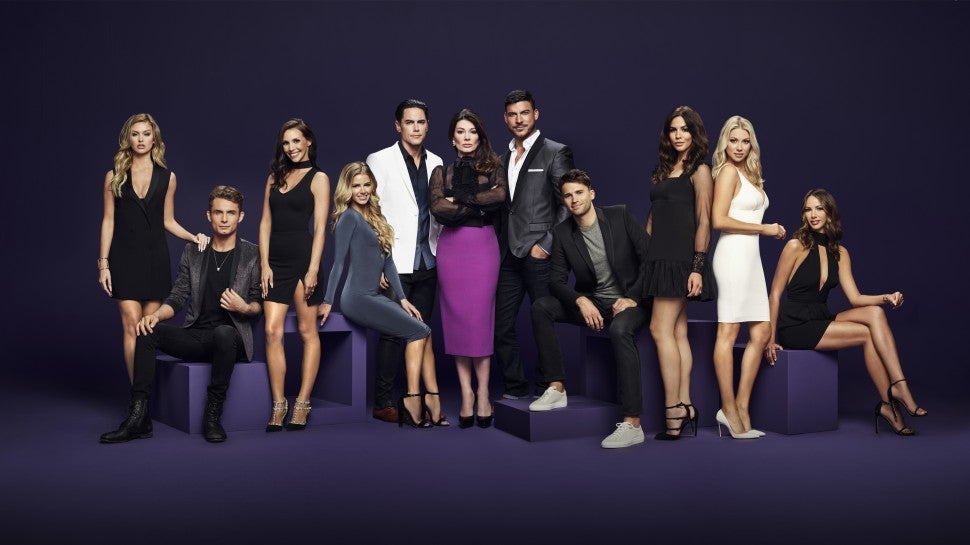 “Right now, my hormones are running the show,” she notes. “So, if I were to react off of how I’m feeling now, I would be in a little hut in Puerto Rico and no one would ever see me again.”

On reality TV or just in real life, Lala says her fans should expect to see a different version of her moving forward.

“I don’t want her to have a mom that’s popping off left and right,” she says. “There’s a lot of things that are going to change. Now, I’m not saying I won’t clap back, because that’s just in my DNA but, yeah, I think I’m going to be much more delicate. I hope.”

“I just pray to God that my baby girl does much better than I have done, just is much sweeter, doesn’t have a short fuse, like, that’s what I’m praying for,” Lala adds. “I literally pray to God every night like, just give me a sweet little angel, because if she has my quick tongue? God help us all.”

Lala says she’s been thinking a lot about what kind of mom she’ll be, talking to her baby often and even playing her female empowerment anthems like Christina Aguilera and Lil’ Kim’s 2003 collaboration, “Can’t Hold Us Down,” daily, in the womb.

“She’s very maternal,” Randall says, citing how Lala interacts with his two daughters from a previous marriage, 10-year-old London and 6-year-old Rylee, who was actually the first member of their family to learn that Lala was pregnant. She helped break the news to Randall and Lala’s mom, Lisa Burningham, while the family was staying together in North Carolina. Lala took a pregnancy test and hid it inside a popcorn box, which Rylee handed to Randall and Lisa.

This is the most magical video! Rylee was the first person to know lala was pregnant and she was so excited to surprise me and all of us and this was her plan on how to do it! ❤️ #blessed the video is moving beyond words for me

This is the most magical video! Rylee was the first person to know lala was pregnant and she was so excited to surprise me and all of us and this was her plan on how to do it! ❤️ #blessed the video is moving beyond words for me

“At first, I was like, ‘You did it without me?!’ But then I was like, couldn’t believe we’re having a baby,” Randall shares. “We’re very excited.”

Lala and Randall say the whole family started sobbing over the happy news, but the first few weeks of the pregnancy quickly turned scary for the couple. Lala was in and out of the hospital after experiencing heavy bleeding, going on bed rest for six weeks. The 30-year-old believes her late dad, Kent Burningham, acted as a guardian angel for her in those early weeks, seeing Lala and the baby through to health. Lala says her father is the one person she wishes she could share this time in her life with the most. Kent died in 2018 after suffering a stroke.

“The second I found out I was pregnant and saw that, the first thing that came to my mind was, ‘Wow, my dad would be so excited about this,'” she says. “So, he’ll be very missed. He’s got my back up there. He’s making sure I’m OK.”

“[I’ve been] crying about the fact that he’s not here,” she confesses, getting choked up. “You would think after, you know, two years I would be able to think about him and not sob. I’m not quite there yet.”

For now, Lala is trying to stay as positive as possible for the sake of her unborn child. She and Randall have a “beyond perfect” name picked out already, and while her new-ish friend, Megan Fox, did offer her services as a doula, Lala hasn’t started thinking about a birth plan yet. She’s just taking pregnancy day by day, grateful for her future blessing.

“I didn’t think I could be so in love with something that I’ve never met before,” she confesses. “I have sonogram pictures. Every time I get a new one — I have them plastered all over my fridge — and I just stare at her. I’m like, you’re the most beautiful little alien I’ve ever seen.”

Lala and Randall will keep fans updated on their pregnancy journey and Lala’s Vanderpump Rules future on their podcast, Give Them Lala… With Randall. New episodes drop weekly wherever you listen to podcasts.