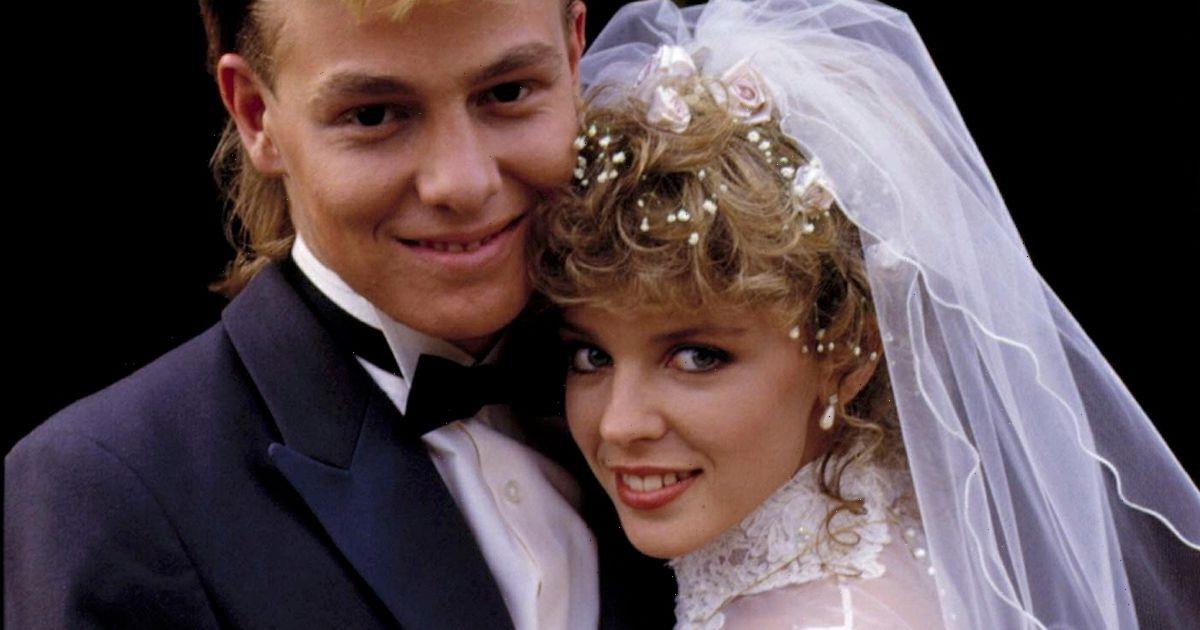 Kylie Minogue has revealed new on-set photos of her reunion with Jason Donovan on Neighbours.

The 54-year-old is reprising her iconic role as Charlene with Jason, 54, returning as her on-screen boyfriend Scott for the final episode of the Australian soap.

They were one of the most famous couples in the soaps 37 year history and the duo are returning for an emotional special that will bring the series to a close, after it was axed from Channel 5.

In the snaps posted to Kylie’s Twitter and Instagram, the old friends cosy up for a selfie on the iconic street.

The legendary singer sports a straight legged denim jumpsuit with her curly blonde hair pulled into a half up half down hairstyle, as she wraps her arms around Jason’s shoulders.

They both beam for the camera as Jason leans back in his black jeans and green and black check shirt to reach Kylie’s petite height.

Another photo shows the soap stars smile at the camera, before revealing a final image that shows the duo have signed the famous Ramsey Street sign.

Kylie captioned the sweet snaps: “Now we’re back together” before tagging the series official account.

Previously, Kylie teased that the ending to the long-running soap is “emotional” and returning to the series was “quite something.”

She began about returning to the set: "It was lovely and emotional. Driving into Ramsay Street was quite something.”

"Firstly, where's all that time gone? Secondly, everything looks exactly the same.

While she couldn’t reveal any details about the final, she added: "There was a lot of talking about memories and going back in time."

Executive producer Jason Herbison admitted he was “thrilled” that the stars were returning for the ending of the soap.

He said: "Scott and Charlene are the ultimate Neighbours couple and it would not feel right to end the show without them.

"We are thrilled that Jason and Kylie have come home to play a very special part in our series finale. It has been an emotional experience for them, for us and I'm sure it will be for our viewers."

The final episode of Neighbours is set to air on 1 August with Kylie and Jason’s special reunion along with other guests.

Stay up to date with all the latest on Neighbours by signing up to OK!'s daily celebrity newsletter .