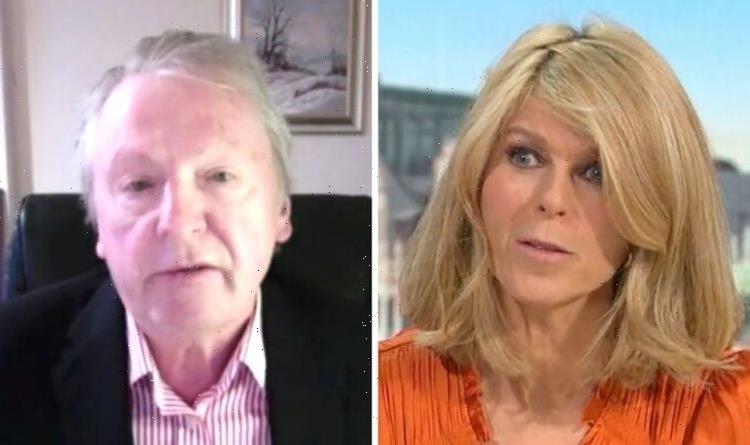 Boris Johnson’s aim to bring an end to all legal coronavirus restrictions by the end of the month has already proven divisive amongst the British public. On Thursday’s Good Morning Britain, ITV presenters Ben Shephard and Kate Garraway were joined by oncologist Professor Angus Dalgleish, who agreed with calls to bring an end to social distancing.

GMB host Kate hit back at Professor Dalgleish’s claims it is now safe for those who have tested positive for Covid to mix in public.

The oncologist argued those who weren’t vulnerable to the virus should be able to return to their normal lives after nearly two years of restrictions.

“This virus is much milder now than it used to be,” he explained. “It is very, very infectious, and I don’t think we can control it or do very much about the way it spreads from person to person.

“If you really want to avoid it you’ll have to self-isolate yourself, and that’s up to you if you’re very vulnerable.”

While case rates remain in their tens of thousands, Professor Dalgleish was eager for jabbed members of the public to do away with isolation rules.

He continued: “But, for everybody else, I think it’s a blessing in disguise because it is actually infecting people, giving them a superb extra-immunity, and allowing them to get on with their lives.

“I personally would encourage people who are infected to mix, and I say that not flippantly but because I’ve observed it.”

Although he admitted he came across one instance of a particularly bad case, Professor Dalgleish said most people who caught Covid over Christmas only showed extremely mild symptoms.

He added: “People should not be worrying. I think it’s virtually impossible to go out without having been exposed to this virus.”

The expert began to explain how upper-respiratory viruses like Covid spread in waves, but Kate cut across him to challenge his views on social mixing.

She explained: “I know from my own experience, from conversations with doctors yesterday, you’re talking about it as an upper-respiratory-tract infection.

“The damage that’s caused widespread throughout the body and the nervous system is still not clear.

“So I guess the fear for those is we still don’t know enough. And to be actively mixing with people who are positive and infectious is still a risk.”

The oncologist argued the public’s natural and vaccinated immunity has been enough to suppress the new Omicron variant, though GMB’s other guest Professor Devi Sridhar was still unconvinced.

“I think that’s quite dangerous, actually,” she retorted.

“If you look at the United States, the reason they’re facing thousands of deaths a day is because people believe misinformation online and are not getting vaccinated and boosted.”

The prime minister is yet to officially confirm that all restrictions will be lifted but an announcement is expected by the end of the month.