Behind a sparkly dividing wall, on a glitzy stage made up like Liberace's living room, three young dorks slouch awkwardly atop bar stools.

"I love music. What song best describes you?" asks a tall, model-ish young woman seated on its opposite side, out of sight from her enthusiastic suitors.

"I quite like that DJ Khaled fellow, because I've got 'wild thoughts' for you," the first contestant replies. The live studio audience woos.

"I love spicy food, so I'll go with Johnny Cash's Ring of Fire," says the second, trying a different tack.

The third contestant, a lanky dude with a rural twang who looks like he can crack a whip, requests a mic for an original rap. "Get down, get down, get up, get up!" he chants. The live audience groans.

Ten's new dating show Blind Date might be a circus, but it's comfortingly familiar. "It's not that serious. You're supposed to laugh!" host Julia Morris says. 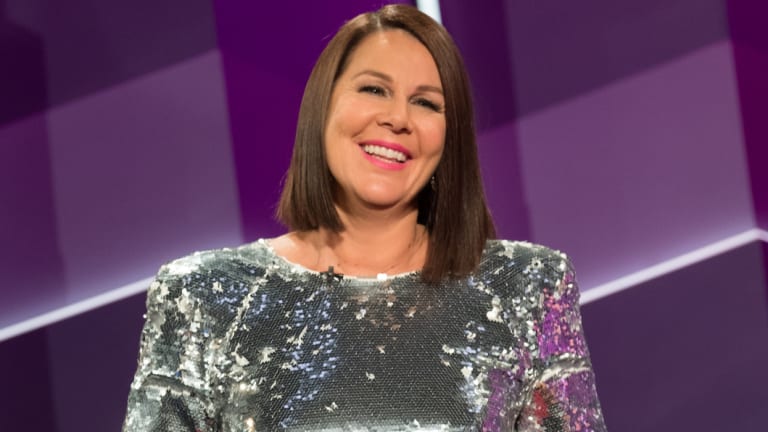 It's been more than 50 years since the classic Dating Game format was first developed in the US, and almost 20 years since it last aired in Australia. While that version, a reboot of Greg Evans' '80s hit Perfect Match hosted by Shelley Craft, was short-lived, Morris says the format's due for a revival – even among the current glut of TV dating shows. (And no, Dexter the robot's not invited.)

"I think we're at a time where a lot of the people we're seeing on the telly are very media savvy. Most of them have ulterior motives, of wanting to be famous or making their internet business a success," Morris says.

"This is different in that it's a bit more simple. Not the people, the format. There's not much we can do to tricksy up a story with editing. Contestants just say what they say for real. These people aren't looking for scandal or the next level to their career through this show."

The series updates the format with a welcome inclusive tinge, including aged romantics and same-sex pairings, Morris says.

"We show a complete snapshot of singles in Australia, 'cause singles aren't just people in their 20s. A single chap we had on was 80, and all the contestants on that episode were in their mid-to-late 70s. I don't think any other dating show is doing that.

"I also really love how awesome the same-sex couples were. They weren't just the usual television cliches, which I thought was really important. I'm sure I'm wording that wrongly,” she adds, looking to mollify any public flaming.

"Not just normal Australians are single, you know? And let's just bear in mind [Ten] is not just the Bachelor network. There are many, many different shows on the network and many different types of people," she says cryptically.

Morris sees her role as host – and that of her sidekick James Mathison, who re-emerges as a John Blackman-ish voiceover guy – as "nurturing", a necessity in a show that puts the dating emphasis back on the Tinder age's oft-under-utilised "banter" muscle.

"This is not about making fun of the people around me, it's about having some laughs to make them feel comfortable enough to open up. It's a very vulnerable state to be in, asking for love on national television," she says.

"The real joy is when the Slide-o-Wall slides back, and they see each other for the first time. Not being too media savvy, we see a lot of 'brain on face'. At home you can see them going, 'Oh my God, I've picked the wrong one'.

"But then they get to know each other on the date, which is great. I mean, I'm 50, I can tell you, looks fade. Looks only matter in your Instagram years, and after that they make no difference. If someone's nasty, it doesn't matter how beautiful they are."

At a time when TV's top-rating dating shows (Married at First Sight, The Bachelor franchise) are prioritising drama over romance, and eschewing any pretence of helping contestants "find true love", Blind Date is a tamer option for Ten, a bid to plug the family-viewing gap that, until recently, was filled by the likes of Family Feud.

"The idea is it's not too heavy and we're not delving too much into people's lives," Morris says. "But we could use some time off scandal, couldn't we? Isn't most of that scandal manufactured anyway? I smell rats everywhere. There's no rats here, as far as I know."

Next post Rick Ross Reaches Settlement With The IRS