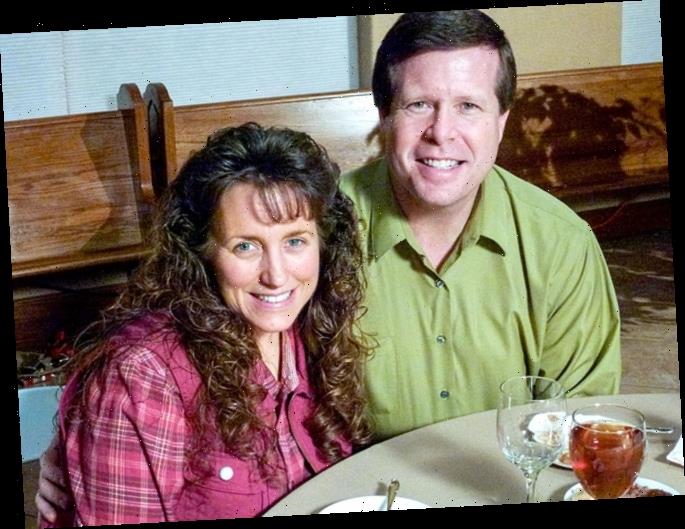 Married on July 21, 1984, the Duggar family matriarch, 54, and patriarch, 55, have welcomed 19 children together over the course of their union.

The couple initially waited four years to have their first child, Josh. After conceiving again and suffering a miscarriage, which they say occurred because Michelle was taking birth control and didn’t know she was pregnant, they decided to let God “bless them with as many children as he saw fit.”

With new babies arriving roughly every year and a half up until 2009, they’ve worked hard to keep their union on track. “We have a weekly date, even if it is just to take a walk in the park,” Jim Bob, a former Arkansas politician, previously told PEOPLE. “We will go out to lunch or dinner and talk together about the kids, upcoming events, what we have coming up.”

Michelle and Jim Bob’s eldest son, 33, and his wife, 32, wed in September 2008 and have six children together, whose monikers all start with the letter ‘M.’ The couple share eldest daughter Mackynzie, sons Michael, Marcus and Mason, daughter Meredith Grace (born amid Josh’s inappropriate touching scandal in 2015) and daughter Maryella Hope, who they welcomed in Nov. 2019.

Just one month after John David, 31, began courting Abbie Burnett, 28, in June 2018, he popped the question in an airplane hangar and the pair went on to tie the knot on Nov. 3 that same year.

The happy couple welcomed their first child together, daughter Grace Annette, in Jan. 2020.

“Our lives have changed forever with the arrival of our baby girl. She is a beautiful gift from God! We are so blessed the Lord has given her to us,” they said in a joint statement on the family website. “It’s still surreal to know that we are really parents, but it’s a great new adventure that we are excited to take on together!” The Duggars’ oldest daughter plays the piano, violin and harp and has helped homeschool her siblings — and she’s also twins with John David, who was born three minutes after her. Jana, who remodels houses, is currently single, and admitted in 2016 that while she’s had suitors in the past, she hasn’t found ‘The One.’

“There have been different guys come along and ask, but they haven’t been the right one. It’s just one of those things,” Jana said on Jill and Jessa: Counting On. “I’m not just out to get married to the first one who comes along.”

She added: “It’s this weird in-between stage. I’m not a younger one, but then I’m not an older married one with kids.” She continued, “So [I’m] just being busy with where God has me right now and being content in this place and learning as much as I can.”

The Duggars’ second eldest daughter, Jill, wed Derick in June 2014 in Springdale, Arkansas. “I am the most blessed man to have Jill,” Derick told PEOPLE after their nuptials, which per custom, saved their first kiss for last. In April of 2015, the couple welcomed a baby boy, Israel David, and the blessings continued in 2017, when son Samuel Scott joined the family.

Since quitting the show in 2017 and subsequently distancing herself from her family, Jill has begun to embrace a life without some of the many rules she was raised to strictly adhere to. She’s gotten a nose ring, enjoyed the occasional cocktail or glass of wine, worn jeans (Duggar women are expected to wear long dresses or skirts only) and even modeled modest swimwear. She’s also grown increasingly outspoken about her sex life with Derick.

“Sometimes,” she says, “it’s a good thing being okay with other people not being okay.”

The Duggars’ third daughter married a few months after older sister Jill in November 2014, before a packed crowd of more than 1,000 at the First Baptist Church in Bentonville, Arkansas. Jessa, 28, and Ben, 25, welcomed their first child Spurgeon Elliot one year later after a dramatic two-day labor; baby Henry Wilberforce joined the family in February 2017; and on May 26, 2019, the proud parents welcomed their third child together, daughter Ivy Jane.

On Feb. 18, the pair announced that that they are expecting their fourth child together after Jessa experienced a pregnancy loss last year.

“After the heartbreaking loss of a baby last year, we’re overjoyed to share that another little Seewald is on the way,” the couple said in a statement.

PEOPLE exclusively revealed in July 2016 that Jinger Duggar, 27, and former professional soccer player Jeremy Vuolo, 33, (another “J” name!) were engaged — and on Nov. 5, 2016, the two said “I do” in front of 1,000 guests at Cathedral of the Ozarks at John Brown University in Siloam Springs, Arkansas, with the groom’s father officiating. In July 2018, the couple welcomed their first child, daughter Felicity.

More recently, the pair relocated in March 2019 from Laredo, Texas, to Los Angeles in order for Jeremy to pursue graduate studies at The Master’s Seminary.

After suffering a devastating miscarriage in fall 2019, welcomed daughter Evangeline Jo on Nov. 22, 2019.

The couple knew each other for 15 years before entering into a courtship in 2016. “It’s really special that I got to grow up with him and my family knows him really well,” Joy-Anna, 23, told PEOPLE before marrying her fiancé of three months in May 2017. “We feel so happy and so excited!” They were even more excited to expand their family in February 2018, welcoming their first child, son Gideon Martyn Forsyth.

Just over a year later, they announced that they were expecting again — but when they went in for their 20-week check ultrasound, they learned that they had lost their unborn baby.

On Aug. 21, 2020, they welcomed a younger sister for Gideon, daughter Evelyn Mae.

The Duggars’ 26-year-old son married his 22-year-old bride on Sept. 8, 2017, at the First Baptist Church in Siloam Springs, Arkansas. “It’s something that I’ve always dreamed of to have a wife and to raise to raise a family in a way that honors the Lord,” he told PEOPLE. “We are very excited to see what God has in the future for us.”

February 2021 brought another new addition — daughter Brooklyn Praise Duggar, born on Feb. 19. “It seems like just yesterday we were at the altar dreaming of a future together, including having children,” the Counting On couple said in a video on TLC. “Wow, here we are with another new addition and we couldn’t be more thankful for her.” In January 2018, the 24-year-old Counting On star announced he and family friend Lauren Swanson had entered a courtship. The pair got engaged two months later and tied the knot in June 2018 before enjoying their honeymoon in Vienna.

After Lauren suffered a miscarriage in October 2018, the couple announced the following May that they were expecting their rainbow baby. In November 2019, they welcomed daughter Bella Milagro.

“She definitely has lived up to her name which means, ‘beautiful miracle.’ Today we are basking in God’s goodness!” the proud parents said at the time.

“Today we have started a journey together that God crafted long before we ever knew it was meant to be. We are so thankful for the love of Christ that has brought our lives together and teaches us what real love looks like,” they said in a statement obtained by PEOPLE. “There is no greater joy than marrying your best friend. We are thankful for the prayers and support so many have shown us through our engagement and look forward to this new chapter of our lives together as husband and wife.”

Justin began courting Spivey after the two met in spring 2019. Their families have known each other for nearly 20 years, Spivey shared in a video on TLC.

The Rest of the Crew https://www.instagram.com/p/Bvaty4VHb6wMichelle and Jim Bob fell in love with names beginning with “J” after naming their first son Joshua from the Bible — and, after giving their first set of twins “J” names, they continued the tradition so their other children wouldn’t feel left out. Say these names three times fast: twins Jedidiah and Jeremiah, Jason, James, Jackson, Johannah, Jennifer and Jordyn-Grace. With several of the boys now in their late teens and early 20s, it seems to be only a matter of time until they begin courting as well. Born premature at 25 weeks in 2010 and weighing just 22 oz., the world watched as the Duggars’ youngest child, their 19th, struggled to survive. “She is a miracle baby and all of us we are so lucky to have her,” Michelle said on Today.

An attempt to expand their family yet again would prove heartbreaking: In 2011, Michelle suffered a miscarriage of their 20th child, Jubilee.

Known as the “rebellious cousin,” Amy is the daughter of Jim Bob’s sister Deanna and made frequent appearances on 19 Kids and Counting, where her less-conservative upbringing made her stand out from the rest of the family. “For me, growing up was all about shorts, tank tops, country songs and boyfriends,” the reality star, 33, previously told PEOPLE. “I love the Lord and I love my family. I’m just not born to live exactly the way they do.”

After less than a two-month engagement, Amy married longtime friend King in a country-chic wedding on the grounds of Horton Farms near Bentonville, Arkansas, in 2015. The couple appeared on Marriage Boot Camp: Reality Stars in early 2017, where they worked on the issues in their marriage and ultimately decided to stay together.

In December 2018, Amy got candid about their sex life, telling PEOPLE that they have sex “all the time” and that they were ready to start a family. “The kids are coming,” Dillon added. “We’ve been practicing.”

It was a fact: the pair welcomed their first child together, son Daxton Ryan, in Oct. 2019.