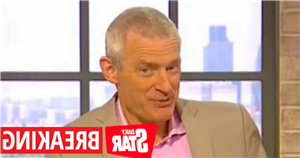 Jeremy Vine on 5 racked up 167 complaints to the Watchdog after panellists commented on the border patrol response to migrant crossings.

While Ofcom have not specifically highlighted which incident had been at the crux of the many grievances, there had been quite a online storm following last Friday's episode.

The host had been joined on the Channel 5 programme by GB News star Nana Akua and writer Jemma Forte to discuss Board Force staff being granted immunity from prosecution if migrants drown while attempting to cross the Channel.

Their debate comes after it was announced that Home Secretary Priti Patel was attempting to introduce a clause that could provide officer with legal protection.

If the Bill is to be passed in Parliament, it would be a criminal offence for any Migrant to arrive in the UK without official documents to enter the country.

Nana seemed to be in favour of the proposal, arguing that it was "fair enough" for migrants to not expect to be rescued if their boat sank.

She said: "If people have come across from the Channel, from France, which is safe, why they would want to take a dangerous border crossing and then have to be rescued…

"Basically, what often happens is they throw themselves overboard so they then have to do a rescue mission, which is part of maritime law."

Nana went on: "I personally think… look, as long as you know that if you come across you won't be rescued if your boat sinks, I think that's fair enough, and that's why they're saying if they come across with jet skis, then they can’t rescue them, it will actually hopefully stop the people trafficking, because if you are supporting that they should be rescued, you're actually supporting people trafficking which means that more people will come across because they think they'll be ok."

Jemma however did not share the same views on the matter.

Hitting back, The writer fumed: "I think it's one of the most disgusting things I've ever heard in my life."

The author argued that the proposal was a "state of sponsored manslaughter" before highlighting that it would be a breach to international law.

She went on: "To dehumanise these human beings who are coming over… why do they do it?

"Because they're desperate, they've come from war-torn countries, they are fleeing places like Syria…"

As the on-air debate took place, Twitter became a hot-bed for commentators across the land with many sharing very divisive views.