In January 2018, amidst his awards campaign for “The Disaster Artist,” the Los Angeles Times reported that five women accused Franco of sexual misconduct. This week, those allegations earned renewed attention when, in a leaked excerpt from her forthcoming memoir, actress Busy Philipps alleged that Franco physically assaulted her on the set of “Freaks and Geeks.” She writes: “He threw me to the ground. Flat on my back. Wind knocked out of me.” Following a Twitter outcry, one user pointed out that Philipps had shared the story on the record multiple times before.

In March 2011, the Los Angeles Times reported Phillips’ recounting of the anecdote as part of its Paley Fest coverage. Franco was not in attendance, with the cast using his absence as the opportunity to roast him in absentia.

It all seemed to be in jest until “Cougar Town’s” Busy Philipps, who played Franco’s hard-edged girlfriend Kim Kelly on “Freaks and Geeks,” chimed in with an odd anecdote. During one scene, she said, the actor threw her to the ground, even though the script didn’t call for the action.

Franco had created a back story in which his character had “maybe been abused by his father, and so he didn’t want any physicality between him and his girlfriend. This was unbeknownst to me,” Philipps recalled, giggling. During the scene, the two characters were verbally sparring, and Philipps was meant to slap Franco lightly on the arm.

After doing so, he blew up, saying “‘Don’t you ever [expletive] touch me again!’ and threw me to the ground. I had the wind knocked out of me,” Philipps said, adding that she then ran into her trailer crying.

[Judd] Apatow, probably trying to change the subject, sarcastically responded by saying Franco was the only cast member to since be nominated for an Academy Award.”And he’s way better looking than all of us,” [Jason] Segel added.

“He’s also the only one too cool to be here,” [Seth] Rogen said, not skipping a beat.

Beyond the awkward tension surrounding Franco, the evening was otherwise light and fun as cast members ribbed one another and even poked fun at themselves.

During that panel, Apatow recalled Franco as being “already method.” A year after “Freaks and Geeks” ended its run, Franco starred in “James Dean,” a TNT biopic about the iconic method actor. To prepare for the part, Franco began smoking two packs of cigarettes a day, learned to ride a motorcycle, and took up guitar and bongos. 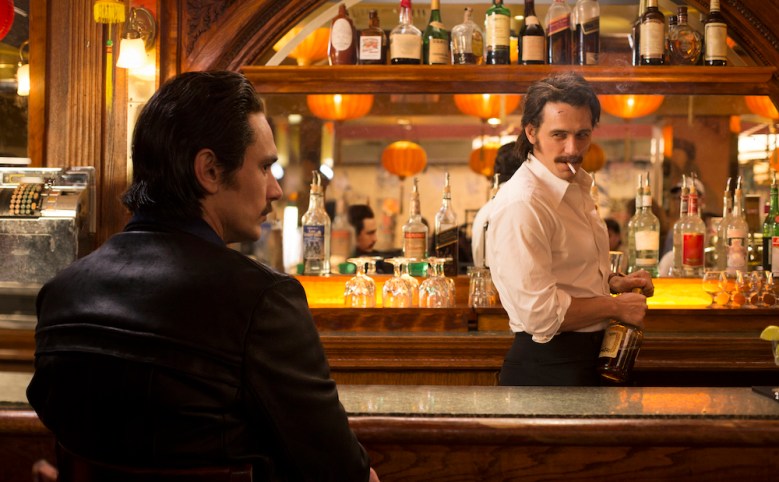 James Franco in “The Deuce”

As HBO prepared to shoot Season 2 of “The Deuce,” co-creator David Simon released the following statement: “Personally I can only speak knowledgeably to ‘The Deuce.’ I’ve checked with all my fellow producers and other personnel. We have no complainant or complaint or any awareness of any incident of concern involving Mr. Franco. Nor has HBO been approached with any complaint. In our experience, he was entirely professional as an actor, director and producer.”

When asked how “The Deuce” had changed since #MeToo, Simon told Rolling Stone: “I felt like we were the right show for the moment. That if you are really interested in discussing the culture of Weinstein and [James] Toback, how ingrained it is and how it’s perfectly framed within the vernacular of how men view women, we had a lot to say about that.” Coming from the man who created what is arguably the smartest television show of all time with “The Wire,” that statement seems willfully ignorant.

Previous post Maggie Gyllenhaal: ‘The Deuce’ Should Not Be Shut Down Over James Franco Misconduct Allegations