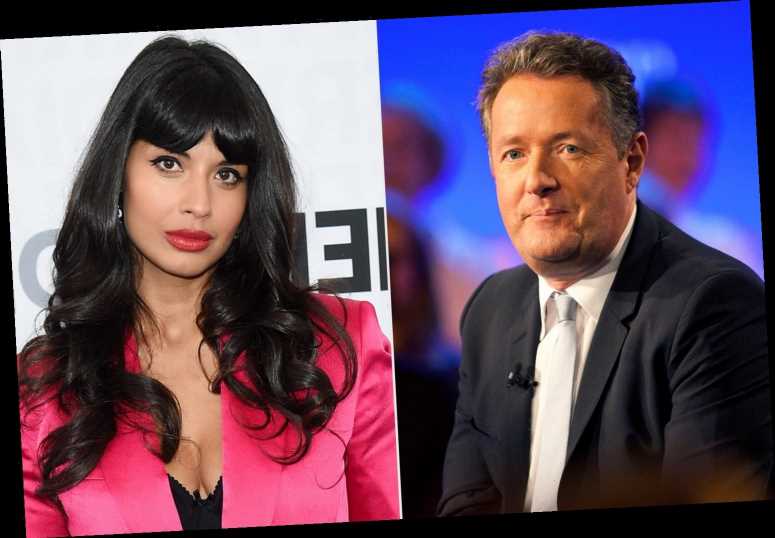 Jameela Jamil is speaking out about Piers Morgan amid the British TV host's exit from Good Morning Britain, which came after he made controversial comments regarding Meghan Markle.

The Good Place star, 35, called out Morgan, 55, in a tweet on Tuesday, writing, "May we NEVER have to watch minorities have to go on mainstream news and have to *defend* their right to be treated with dignity and respect… ever again. All while being screamed over by this man."

The actress went on to share that she had personally struggled with suicidal thoughts because of Morgan's actions.

"I almost killed myself a year ago because of Piers Morgan's relentless campaign of lies and hatred against me last February," she wrote on Twitter. "I'm glad I'm still alive today for many reasons."

"But watching him leave GMB today is right up there and has me feeling…" Jamil continued, sharing a GIF of herself flipping her hair on the Emmys red carpet.

A representative for Morgan did not immediately respond to PEOPLE's request for comment.

Jamil exchanged heated words with Morgan in February 2020 when he released an alleged text message from late Love Island host Caroline Flack that discussed the actress. At the time, Jamil accused Morgan of "using a dead woman who I was friends with, as a weapon to try to create further harassment for me," according to E! Online.

In August, Jamil clashed with Morgan again when he criticized Meghan, 39, for speaking about the U.S presidential elections.

On Tuesday, Morgan made the decision to depart from Good Morning Britain after viewers and his own co-host Alex Beresford berated him for his comments about Meghan's recent interview with Oprah Winfrey. Morgan questioned the Duchess of Sussex's legitimacy when it came to her discussing her mental health. "I don't believe a word she says, Meghan Markle," Morgan said during Monday's broadcast of the U.K. morning show. "I wouldn't believe it if she read me a weather report and that fact that she fired up this onslaught against our royal family, I think is contemptible."

While Morgan has since attempted to clarify his comments on mental illness and suicide, U.K. media regulator Ofcom launched an investigation after more than 41,000 people wrote in to complain, Variety reported.

Morgan stormed off the set of Good Morning Britain on Tuesday when Beresford confronted him about his comments, saying, "I understand that you've got a personal relationship with Meghan Markle or had one and she cut you off. She's entitled to cut you off if she wants to. Has she said anything about you since she cut you off? I don't think she has, but yet you continue to trash her."

"Okay, I'm done with this, sorry, no, sorry … see you later, sorry, can't do this," Morgan said as he stood up and walked off.

ITV later confirmed that Morgan exited the show as its co-host. "Following discussions with ITV, Piers Morgan has decided now is the time to leave Good Morning Britain," the network said in a statement. "ITV has accepted this decision and has nothing further to add."

If you or someone you know is considering suicide, please contact the National Suicide Prevention Lifeline at 1-800-273-TALK (8255), text "STRENGTH" to the Crisis Text Line at 741-741 or go to suicidepreventionlifeline.org.