Good Morning Britain saw Piers Morgan and Susanna Reid return to presenting the show this morning and viewers tuned in to see Ron Thomson, a big game hunter on a live link from Pretoria, South Africa being interviewed about killing 5000 elephants during his career.

Keen to find out why Ron had slaughtered so many animals, which include several other African species, Piers asked him why he spoke about his work with such pride.

“You proudly stated you’ve killed 5000 elephants, shot them to death,” the journalist began. “You caused an outrage when it came out last week, the language you used, spoke with such pride and no penance, you thought it was fine.

“The elephant population has dropped from 1.3million to just 4000 thousand. You proudly talk about having shot to death elephants, and people are curious why you defend such a practice.”

“That’s because you don’t understand,” Ron hit back. “You know nothing about the management of the elephant. Those elephants should be culled every year to bring them down to a level they do not damage their habitat.”

The hunter then referred to a national park in Africa which apparently has 20 times too many elephants.

“What happens is the elephants destroy the habitat for themselves and others specifies, losing biological diversity,” he continued.

“If your elephants or buffalo, or even white mice are causing biological diversity loss, you’ve got to reduce it to a number habitats can sustainably support. Management is absolutely critical.”

“My response is many people were very offended by your language at which you spoke about killing these great animals which are soon going to become except,” Piers argued.

“The elephant is not facing extinction at all,” Ron casually replied which instantly riled Piers up, as he snapped: “You’re making these statements as if they are indisputable facts!” 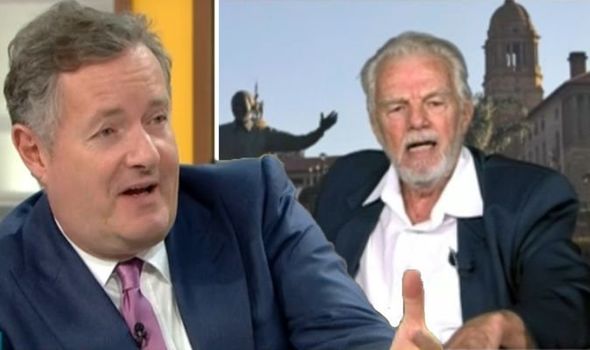 Ron went to interject but Piers cut him off: “If I may finish! Elephants population has plunged from 1.3 million to 4000, clearly if they carry on at that rate they are a specie which is facing extinction.”

“No I don’t accept that,” Ron stated.

Piers then tried an different approach and asked: “Did you enjoy killing those elephants? The language you used is highly inflammatory.”

The interviewee said: “[They] will say it’s inflammatory, I agree with you. I feel nothing, if I had got emotionally involved I would never have been able to get my job done.”

“Your whole life and career has been killing great animals, it’s the way you’ve been speaking about it so proudly [that I have an issue with],” Piers responded. 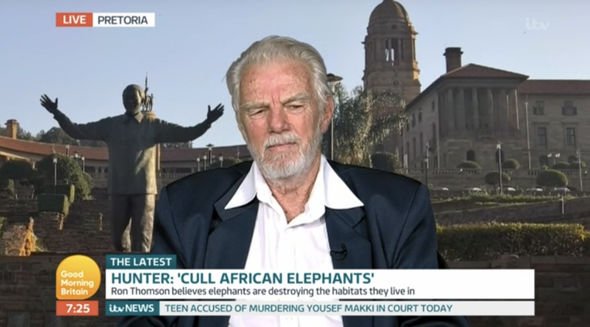 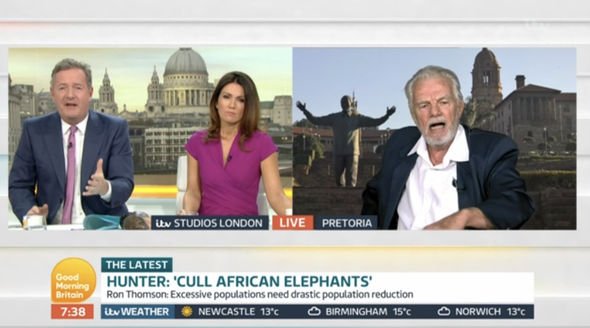 The elephant is not facing extinction at all, Ron.

According to Ron, the killings he carries out are different to those conducted by trophy hunters.

“I’m not a trophy hunter,” he claimed to Piers and Susanna. “I have never hunted a trophy in my life. I’ve done what I’ve done under government control and government instruction; I manage national parks to save the biodiversity. You have to handle this business without emotion.”

Piers then suggested his “conservation work” was just a “pretext or cover to allow trophy hunter to be around,” and this angered Ron.

“It’s very easy for you to sit in your comfy armchair in London and say that,” the interviewee shouted. “I’ve shot elephants because they are damaging the habitat. They are wiping our whole forests, trees that are some 5000 years old. What do you propose we should do with these elephants? Don’t come and tell us we don’t know what we’re doing!”

But Piers commented: “Is there not a more humane way of talking about this? It would be quite nice to hear you to just say “it breaks my heart every time I have to shoot one of these animals”. I think you enjoy it.”

Ron’s final word on the matter were: “I was highly efficient about it. Went in and got the job done.”

Good Morning Britain airs weekday mornings from 6am on ITV.