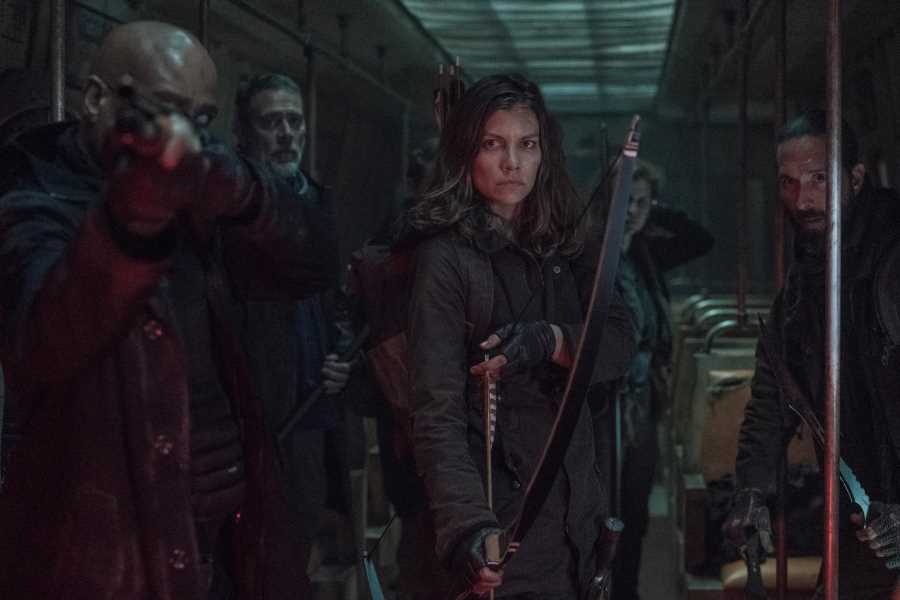 So at what point did you finally give up on the world of The Walking Dead?

Was it when Negan turned Glenn and Abraham’s skulls into mashed potatoes with his bat five years ago on The Walking Dead? When the series’ nominal leader Rick Grimes was lifted off by a chopper for parts unknown in Season 9? When Madison or her son Nick were killed off in the offshoot series, Fear the Walking Dead, leaving behind a few less (and much-needed) charismatic characters? When, in the current season of that spinoff, Morgan had to shoot the zombie baby locked in a piece of luggage or poor Rufus the dog was killed?

Along with deciding it’s time to give up your land line, thaw out the freezer, or change your passwords, announcing that you’ve finally given up on the Walking Dead franchise — and then not actually doing it — has become a twisted sort of national pastime. Anyone who’s stayed loyal to the franchise (not counting the current YA-oriented World Beyond) has long to deal with the inevitable questions from non-converts: “That show is still on? Why?” It was always easy to tick off a few reasons to stick with them, but it’s time to admit it: In the current 11th and final season of The Walking Dead and the seventh (and probably not final) of Fear, the thrill is pretty much gone. Almost in tandem this year, both series have crossed that line from fun-bleak to bleak-bleak. (Apparently many agree: The Halloween night Fear dipped to 870,000 viewers, about half the series’ ratings a year before, and the first batch of farewell episodes of The Walking Dead pulled in about 2 million a week — not bad, but way down from the show’s peak of 17 million when Jeffrey Dean Morgan’s Negan entered the picture.)

For many years, especially the first half of last decade, The Walking Dead and Fear the Walking Dead made the most of a brutalizingly basic premise: Due to reasons that were never entirely explained, the dead come back to life and try to munch everyone in sight. Meanwhile, the survivors of this zombie apocalypse lurch from one safe space to another, often fighting among themselves or villains they regularly encounter. (And sometimes, as when Rick and his posse slaughtered a bunch of Negan’s team with no provocation, those villains could be themselves, adding a fresh psychological angle.) You’d think the setup would have worn thin after a season or two, but credit TWD’s various showrunners for keeping the WTF twists coming and not merely adhering to the comic book’s plotlines. Pivotal characters were unexpectedly sacrificed, and ever-inventive ways to slay zombies were devised (the garbage compactor that turns them into undead milkshakes!). 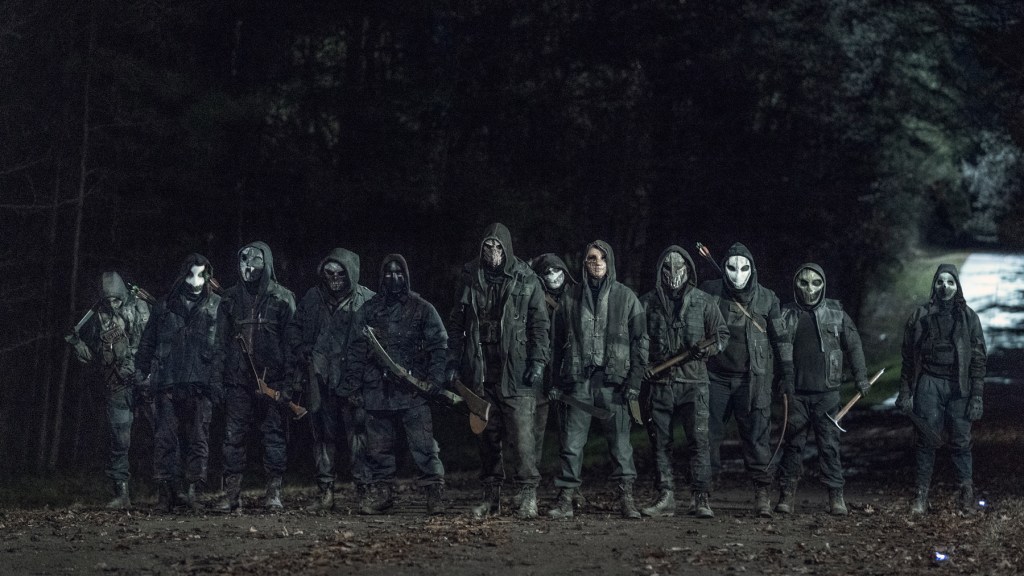 Don’t Fear the Reapers: A scene from Season 11 of ‘The Walking Dead.’

Those innovations now feel as long ago as the first Obama administration that was underway when The Walking Dead arrived in 2010. Like walkers who weren’t sufficiently stabbed in the skull, the show kept coming back just when you thought it was over for good. Sometimes, the return was welcome. Rick’s departure about a third of the way into the ninth season should have spelled the point of no return. But later during that run of episodes, the arrival of the Whisperers — who wore masks made from the flesh of the dead — added a chilling new baddie, Samantha Morton’s deranged Alpha; with her shaved head and scowl, she looked like Sinéad O’Connor gone crazy in the apocalypse. Even though many of us saw it coming thanks to the comics, the sight of all those decapitated heads on poles that same season was well, um, executed. And earlier this year, Morgan’s Negan was finally given the back story we desperately craved: “Here’s Negan” explored the trauma that transformed him into a warlord and was one of the best TWD episodes in ages.

But now, in season 11, the series is saddled with yet another group of shadowy thugs, this time called the Reapers. (Why are all these different factions given names that sound like Sixties garage bands?) As seen in the first round of episodes that wrapped up, the Reapers were among the lamest TWD bad guys ever, almost perfunctory and hardly even scary; even Maggie (Lauren Cohan), the returning champion who should be the new core of the show, comes off as glum, unpleasant and surprisingly irrational at times. Every other scene seems to have filmed in semi-darkness, making the season exceptionally murky and confusing. Some of the cast have stumbled upon the Commonwealth, a seemingly normal community (ice cream cones!). But as with previous such environs they encounter, there’s something creepy and fishy about it, and you know the “dark side of the Commonwealth” is right around the corner. You’re left to ponder the truly important questions: Why do so many of the rotters seem to wear frayed flannel shirts? Did they walk all the way from Seattle?

Initially set in Los Angeles, Fear the Walking Dead brought both a new locale and a new backstory to the franchise. Its freaky scenes of the moments when the dead began coming back to life, and how humans reacted to this unimaginable nightmare, were something we never saw in the original Walking Dead. Since then, the series has had some great and some meh runs; kudos to the season set on the soon-to-fall Texas ranch or the arrival of tormented ex-cop John Dorie (Garret Dillahunt). Naturally, John was killed off in the aftermath of a human murder mystery. That arc demonstrated how effective the series can be when it grapples with more than just zombies but, again, Dorie’s grim death deprived us of another reason for watching.

Season Six, which wrapped up this past June, introduced a crazed cult leader, Teddy, who, as played by John Glover, looked like the star of Abraham Lincoln: Serial Killer. In the closing and most startling episode, Fear truly went there: Teddy actually unleashed a batch of nuclear missiles sitting dormant in a beached submarine. Characters, watching helplessly as mushroom clouds sprang up around Texas, were either instantly incinerated or took cover in shelters.

For any other series, a scene  like that would spell “finale.” But no: In Fear‘s seventh season, the survivors continue to dispense with zombies and scavenge for food — but now while wearing home-made Hazmat suits and trudging around in a sepia-toned post-nuclear winter. If anyone can take a dreary, oppressive scenario and make it even drearier and more oppressive, it’s the Fear crowd. The eternally conniving Victor Strand (Colman Domingo) is now the overlord of his own community, which means he’s destined to become the series equivalent of The Walking Dead‘s General. But given how feckless Strand has long been, that twist isn’t remotely surprising, and the promised upcoming battle between him and Morgan Jones (Lennie James) already feels like an exhausting rerun. 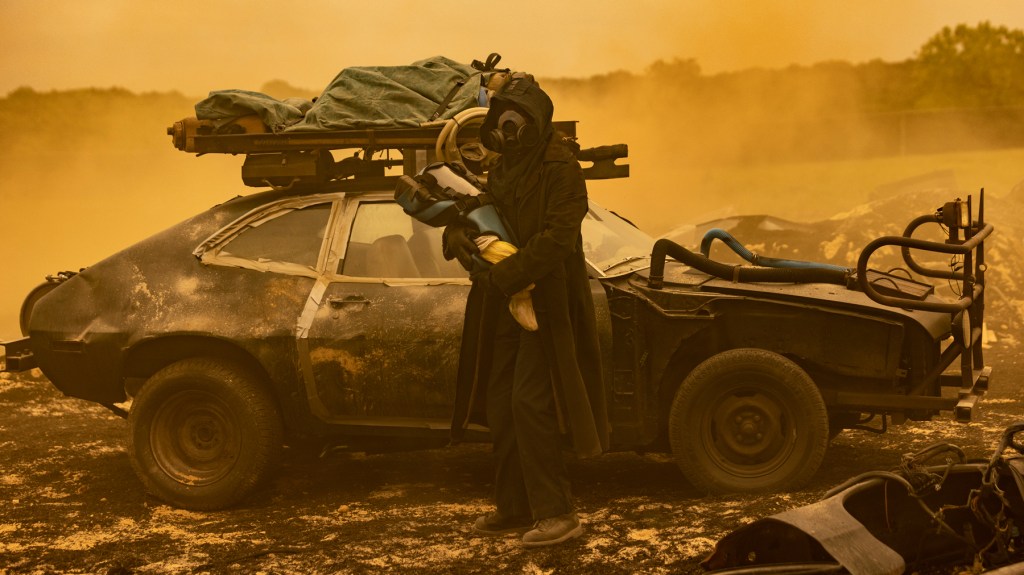 Lennie James, in a scene from ‘Fear the Walking Dead.’

It wasn’t always that way, of course. The early seasons of both series allowed you to spend quality time with the end of civilization: How could it end, how could it be rebuilt, and how would any of us would personally respond to it?  You could regularly ask yourself: How would I cope with the relentless stress? Would it be easier to end it all before the inevitable zombie bite? Would you be able to learn to ride a horse, fire a weapon or, just as important, build some of those cool spiked fence posts that would keep the zombies stuck at a distance?

But in light of ongoing climate disasters and daily apocalyptic news on nearly every front, the demented thrill of watching a dying world doesn’t seem so thrilling anymore. Even if zombies aren’t in our foreseeable future, watching these series — and their depictions of people being forced to do whatever it takes to survive in a world that no longer resembles anything from their pasts — now feels like it may be like to watch the news in 2045. In one of the recent Fears, newish couple Morgan and Grace, and the baby they rescued, are driving to what they hope is yet another safe zone far from the nuclear fallout. But it’s all getting to Grace, who tells Morgan it will “take a lot longer and be a hell of a lot more painful.” We all share the feeling now.