He looked pretty dead to us, but it’s looking more and more like Alexander Skarsgård’s Perry Wright might play a role in the second season of Big Little Lies.

Skarsgård’s domestic abuser was revealed at the close of the first season to be the character who’d perished at that fateful party, being pushed down a flight of stairs by Bonnie (Zoë Kravitz).

However, while the Little Drummer Girl actor stopped short of confirming his return, he did tell Digital Spy that he’s “read all the scripts” for the Big Little Lies sequel, which will see returning cast Reese Witherspoon (Madeline), Nicole Kidman (Celeste) and Shailene Woodley (Jane) joined by Meryl Streep. 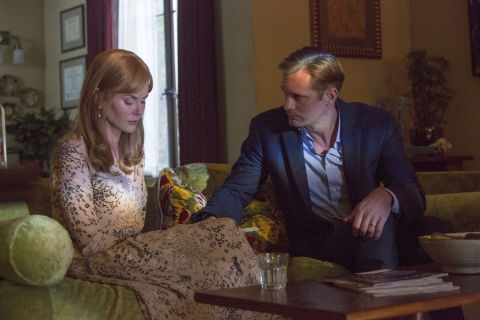 “They found a way to stay with these characters, but in a way that feels very interesting and very surprising – hopefully – to people.”

Why would Skarsgård need to read the scripts if he wasn’t in season two? Good question. Maybe the Big Little Lies team are just totally chill when it comes to potential spoiler leaks and hand out scripts to anyone that asks… but we doubt it.

Big Little Lies resumed shooting from the spring of 2018 until August, with an eye on a 2019 launch. The new season will air on HBO in the US and on Sky Atlantic in the UK.

Alexander Skarsgård stars in The Little Drummer Girl, beginning Sunday (October 28) at 9pm on BBC One.