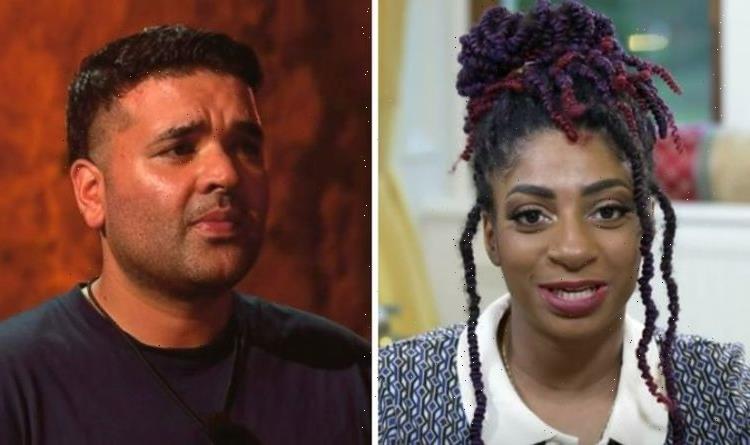 Kadeena Cox has become the second contestant to be booted off I’m A Celebrity…Get Me Out Of Here! The Paralympian appeared on Tuesday’s instalment of Lorraine to speak to host Lorraine Kelly about her time on the popular show. However, the star ended up opening up on her “strained relationship” with fellow campmate Naughty Boy.

Kadeena, 30, and Naughty Boy, 40, rubbed each other up the wrong way on numerous occasions on I’m A Celebrity, with camp meals being a bone of contention for the both of them as they were both allocated as the camp’s chefs.

The athlete opened up in the Telegraph that she’d been left annoyed by the DJ’s lack of food preparation and later told Naughty Boy not to talk to her.

A frustrated Kadeena told Naughty Boy she was “tired of repeating” herself to him as it was “annoying”.

Another row ensued in front of the camp when the DJ once again took exception to Kadeena being “rude”.

Speaking to Lorraine about her experience on I’m A Celebrity, Kadeena admitted when she signed up she thought it would be “kind of plain sailing” but soon realised it was tougher than she’d anticipated.

The gold medalist was asked about the difficulties she faced while cooking for the camp which caused tensions among the celebrities.

“I knew this was going to come up wasn’t it?” Kadeena quipped.

“It’s tough in there you know, there’s not a lot of space and when you have so many people to feed to want to make everyone happy.

“But having two cooks in the kitchen, everyone says it’s not supposed to happen and I learnt why while being in there.

“Butting heads with another chef isn’t fun. And I really enjoy cooking but it became really challenging and the food was good when we managed to get it right.

“But it put a strain on my relationship with my fellow co-chef [Naughty Boy].”

While Lorraine said Kadeena’s clashes with Naughty Boy didn’t go unnoticed, she told the athlete she could see how much she bonded with the women in camp.

DON’T MISS…
When will Escape to the Chateau reopen? ‘We’ve made a tough decision’ [LATEST]
I’m A Celebrity’s Frankie Bridge to be voted out next – here’s why [EXPLAINER]
Dan Walker dealt ‘knockout blow’ to Dominic Raab over Kabul evacuation [VIDEO]

Kadeena explained: “I would love one of the girls to win and I have my money on Louise who has been the mother to all of us and I think all of us would be super happy if it’s her.”

She added: “She’s been there for all of us when we have been low.”

During the interview, Kadeena also talked about living with multiple sclerosis (MS), which she was diagnosed with back in 2014.

She told Lorraine: “We can still crack on with life and we can be really happy as life is not all doom and gloom.

“When I was diagnosed I thought it was the end of the road but I have lived an amazing life and better than what I ever would.”

She said she wanted to educate viewers on the condition and show them that “it’s okay to be upset” at times.

Lorraine continues weekdays on ITV between 9am and 10am.