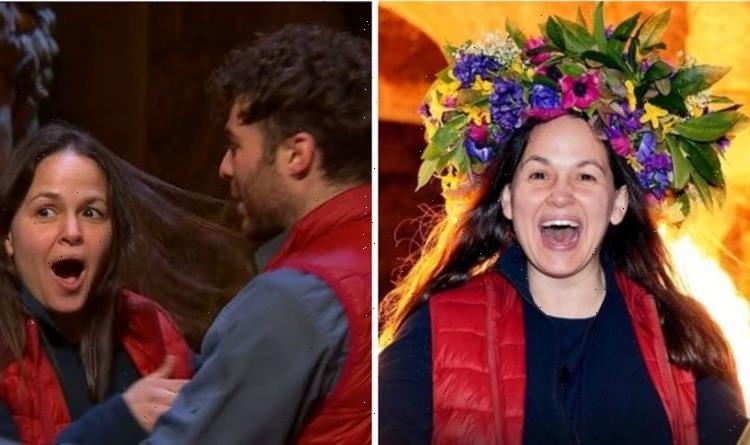 Reigning Queen of the Castle Giovanna Fletcher joined Zoe Ball on Tuesday morning to speak about her husband Tom Fletcher’s stint on Strictly Come Dancing, the release of her new book and also reminisced about her time on I’m A Celebrity… Get Me Out of Here!. When asked what advice she would give the latest ITV contestants, Giovanna had some wise words of warning.

Playing the ITV reality show theme song, Zoe began: “It’s about this time last year you were getting ready to go down to Wales to see your friends Ant and Dec and go to the castle.

“It looks like a good gang, what would your advice be to them as they prep if they’re listening to the show this morning?”

Giovanna revealed: “Now would be to relax, make the most of this time because usually most things are winding down work-wise.

“No one is trying to get to you, so enjoy a bit of relaxation, sleep, be comfortable, have the food you want,” she continued before issuing a warning: “But get rid of the caffeine.

Agreeing with her advice, Zoe replied: “Wind down on all the bad stuff, so you don’t get the cravings and the headaches when you’re in there.”

Giovanna continued: “Exactly, part of it is, I want it now because I won’t have it in there, but actually, you’ll do yourself a disservice, so get rid of it all.”

Laughing at her passionate advice, Zoe said: “This is very sensible advice, I’ve never heard anyone give that advice before. Quick, get onto Frankie Bridge.”

The campmates who took part last year saw one of the closest groups the show has ever seen, and Giovanna revealed they are all still in a WhatsApp group together.

“Still on a WhatsApp group, and when we see each other, there’s this amazing thing where we literally just slot together.

“You know, when you see people after a long time, and it can be a bit awkward, there’s none of that, and I think it is testament to the bond that we created.

“In Wales, we knew nothing about what we were walking into, whereas in Australia obviously you’d kind of know the setup, you‘d know what you were going to be challenged with.

“We knew nothing, like everyone else, we’ve had Covid that has been a part of our lives, we weren’t able to hug other people outside of our houses.

“So being part of this bubble where we could just literally be together and embrace each other and just muck around and not worry about, that was magic for us,” she told.

The celebrities who are rumoured to be entering the Castle this year include soap stars Adam Woodyatt, Simon Gregson, and Danny Miller.

While Radio 1 Extra DJ Snoochie Shy, Paralympian Kadeena Cox and DJ Locksmith are all set to take on the challenges in Gwrych Castle.

I’m A Celebrity… Get Me Out of Here! returns to ITV on November 21.