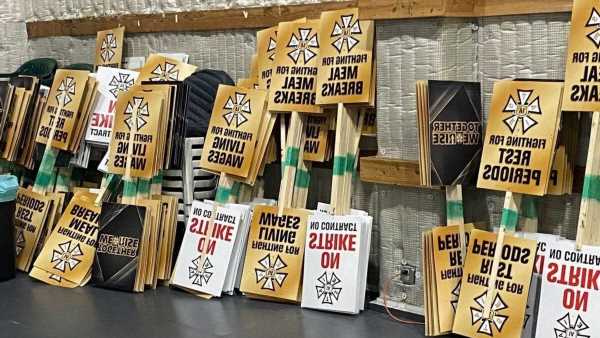 It appears Hollywood may avoid a strike after all.

With just days to go until the Monday deadline, the International Alliance of Theatrical Stage Employees (IATSE) andAlliance of Motion Picture and Television Producers (AMPTP) are making “very good progress” on a new labor agreement, which would avoid one of the biggest strikes in Hollywood history.

Variety first reported on Saturday that the two sides are close, and an individual with knowledge of the talks confirmed that a deal is “in sight.” According to Variety, Disney’s Peter Rice and power lawyer Ken Ziffren have been instrumental to bridging the gap.

IATSE had set a deadline of Monday, Oct. 18, at 12:01 a.m. PT to reach a deal. If that doesn’t happen, union members will begin a nationwide strike that would set in motion the biggest work stoppage over a labor dispute since the 2007-08 strike by the Writers Guild of America. It would be the first strike for IATSE in its 145-year history.

A potential strike would come as the industry is still recovering from the the months-long COVID-19 shutdown.

IATSE leadership has laid out four main areas of concern it wants addressed as part of any new deal: Excessively unsafe and harmful working hours, Unlivable wages for the lowest-paid crafts, Consistent failure to provide reasonable rest during meal breaks, between workdays, and on weekends, workers on certain “new media” streaming projects get paid less, even on productions with budgets that rival or exceed those of traditionally released blockbusters.

Broken down a bit more specifically, IATSE seeks a hard limit on shooting hours to avoid 14-hour shoot days that can lead to exhaustion. They also want increased contributions to the union’s health and pension plan. But perhaps the biggest issue — one that all of Hollywood labor is facing — is increased wages and compensation for workers at a time when the streaming boom has caused rapid growth in production demand and profits.

The AMPTP has said it addressed the union’s demands with a proposal that included included increases of 10-19% in minimum wages for 871 members, an average of 18% increase in minimums for certain new media productions, and covering the $400 million deficit in the IATSE Health Plan without raising premiums and other healthcare costs like deductibles and co-pays for dependents.