And over the years the actress who played her in three hit films admits her own life has often resembled the disaster-prone singleton’s a bit too closely. 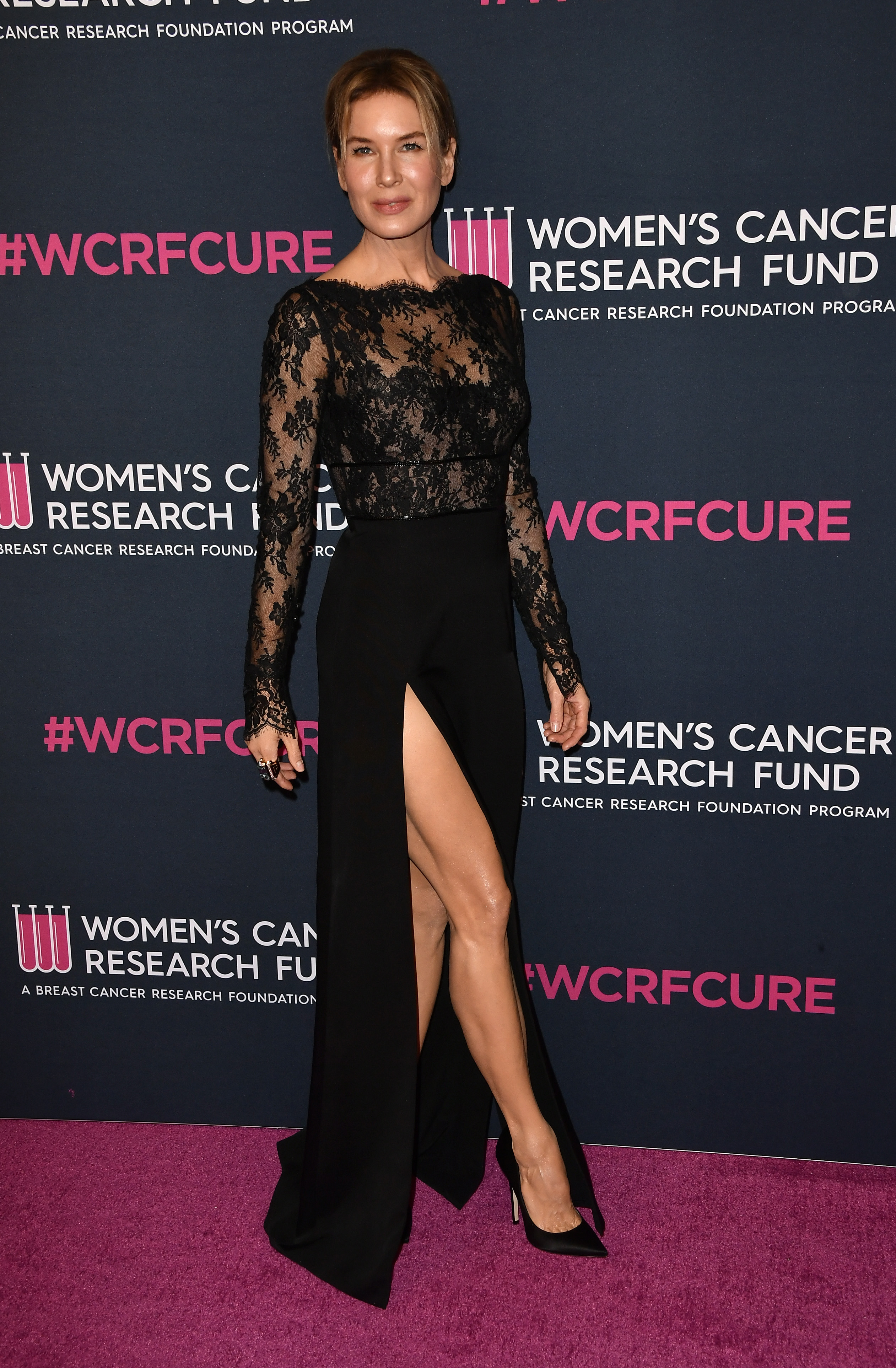 Renee, 51, has been just as unlucky in love, last year ending the latest in a long line of doomed relationships — including country singer Kenny Chesney, the man she was married to for just five months in 2005.

Speaking in a new TV programme celebrating the much-loved character, she says she is grateful for the films but less than thrilled with the obvious parallels in her private life.

“I’ve had moments when I feel like I’m sitting beside myself watching my Bridget alter ego just spiralling, circling the drain.”

The book was based on a series of Helen’s newspaper columns which first appeared 25 years ago — an anniversary marked in BBC2 documentary Being Bridget Jones, which airs next week.

In the programme, the author talks about the magic of the 32-year-old Londoner, who finds herself in love with her dashing but two-timing boss Daniel Cleaver, played in the film by Hugh Grant. 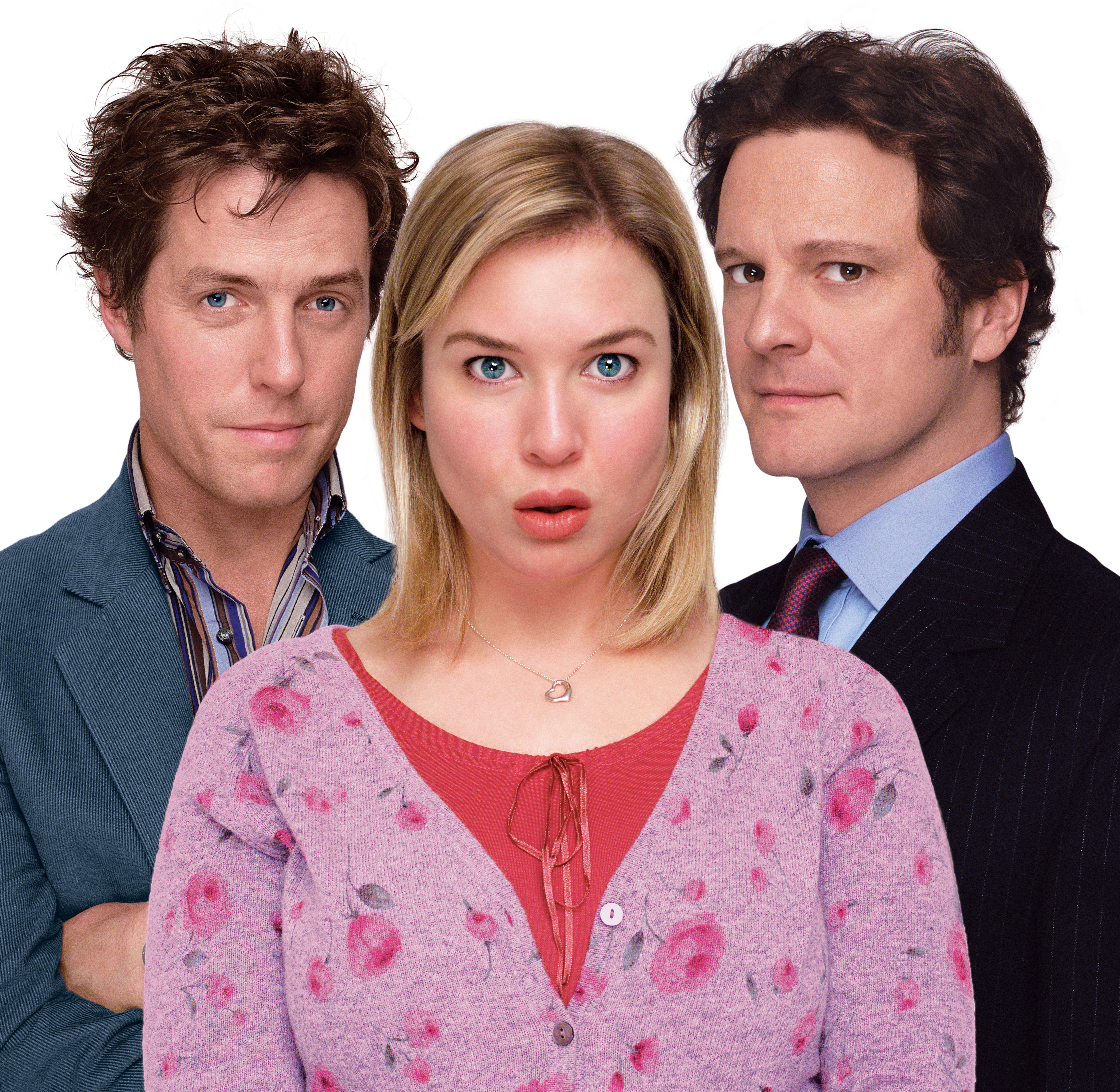 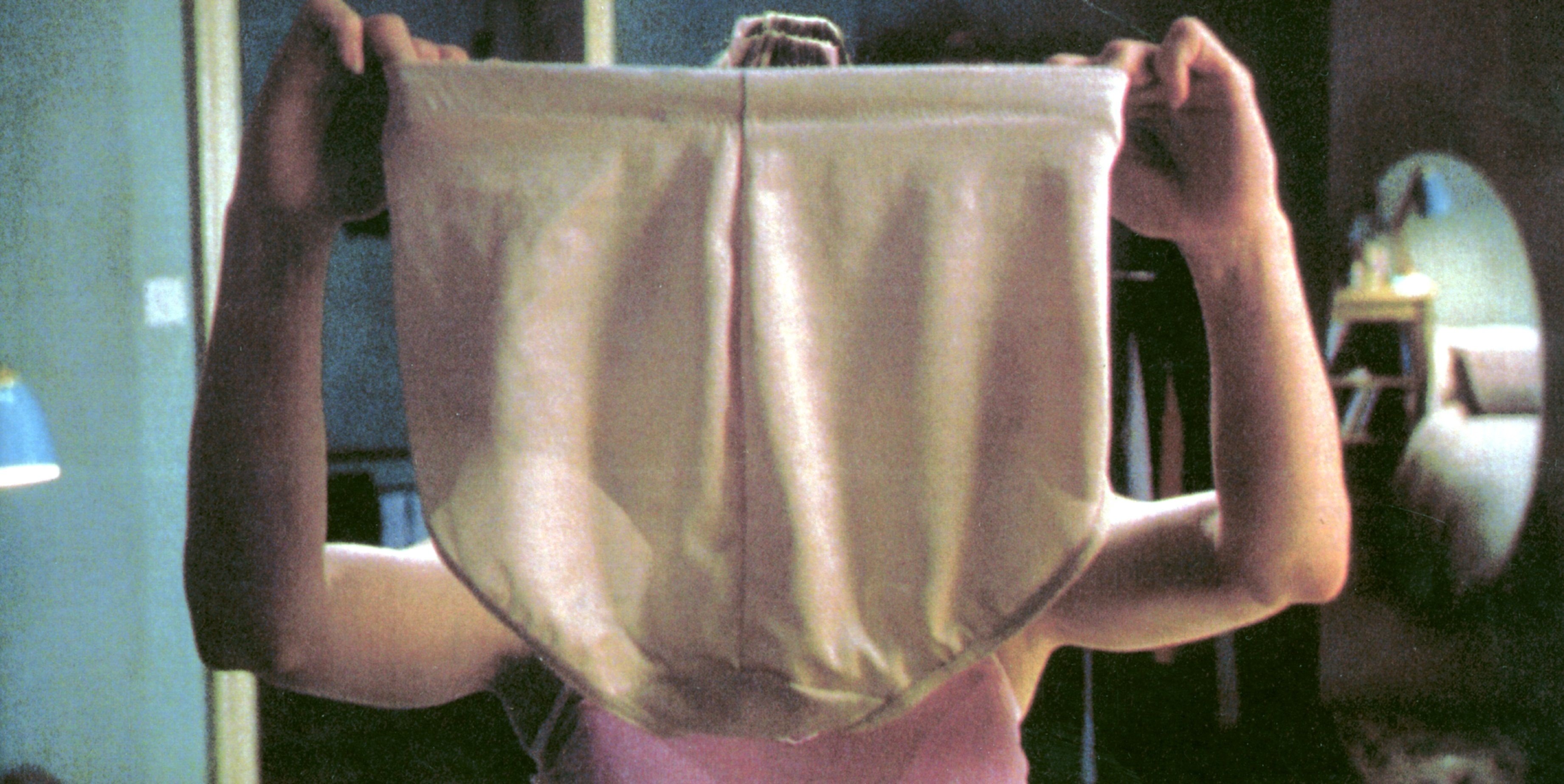 Then she realises her true feelings for lawyer Mark Darcy, played by Colin Firth, who initially dismisses her as “a verbally incontinent spinster who smokes like a chimney and drinks like a fish” before he falls for her charms.

The documentary looks at the origins of Bridget’s character, and which aspects of it she shares with author Helen.

She was born and raised in Leeds before going to Oxford University and partying through her twenties. But by her thirties she was having similar experiences of being a “singleton”.

Ironically Helen, now 62, met her long-term love in 2000, the year Bridget Jones’s Diary was made into a film.

Kevin Curran was a writer and executive producer on TV’s The Simpsons, and they had two children, son Dash in 2004 and daughter Romy in 2006.

Kevin died from cancer aged 59 in 2016, the year Helen wrote her most recent book, Bridget Jones’s Baby: The Diaries.

As a literary creation Bridget quickly became an inspiration for modern women trying to find happiness while coping with others’ expectations. 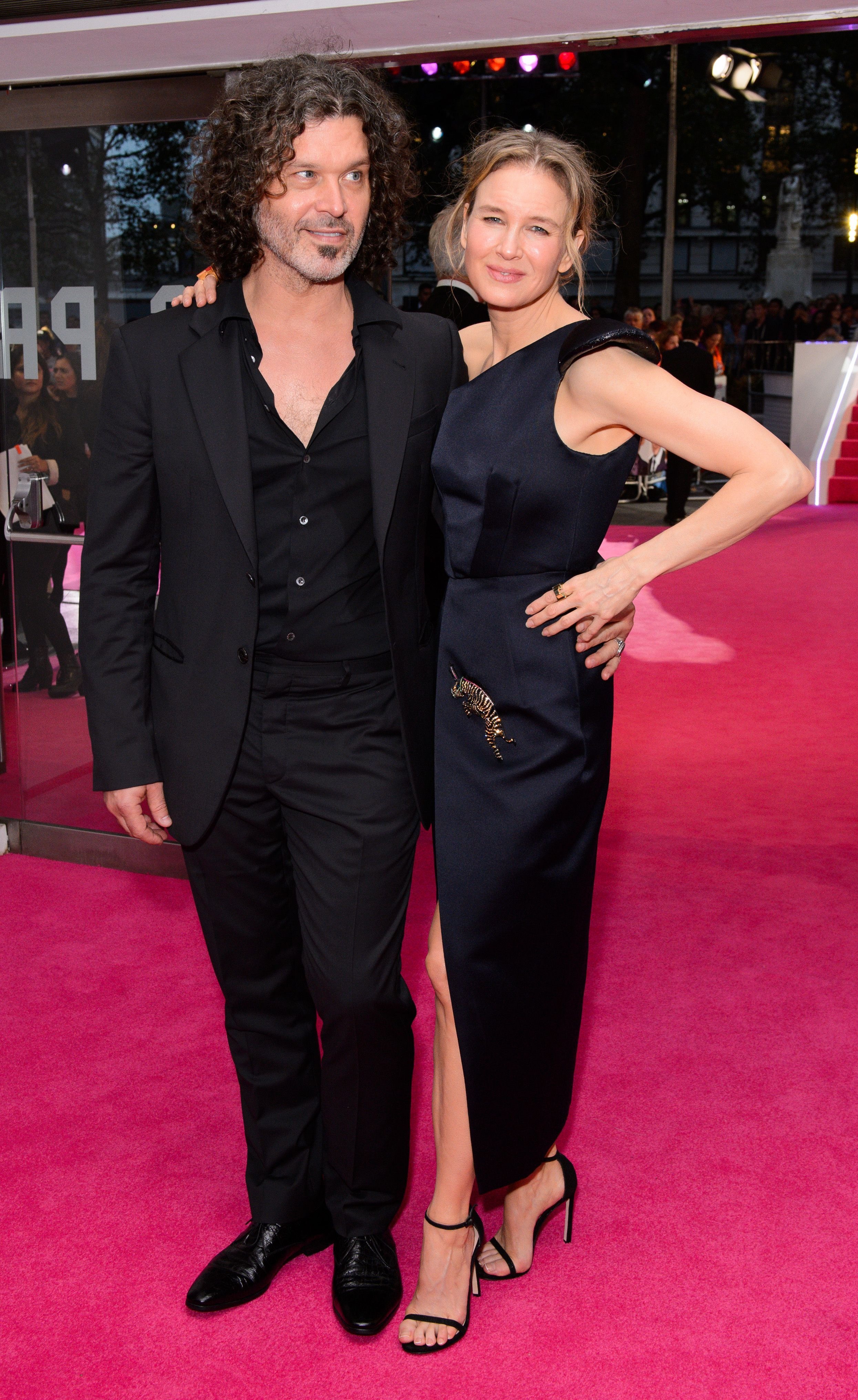 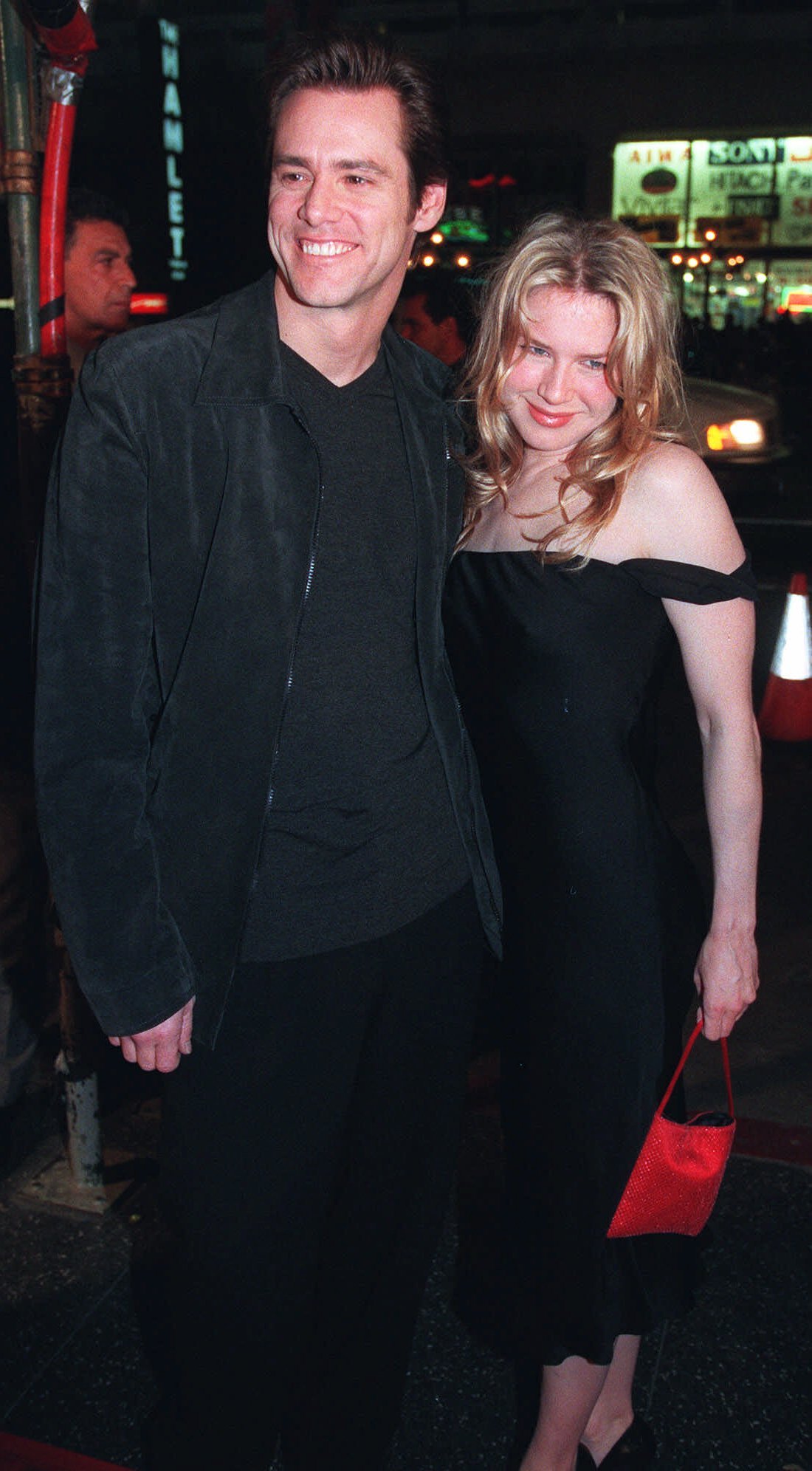 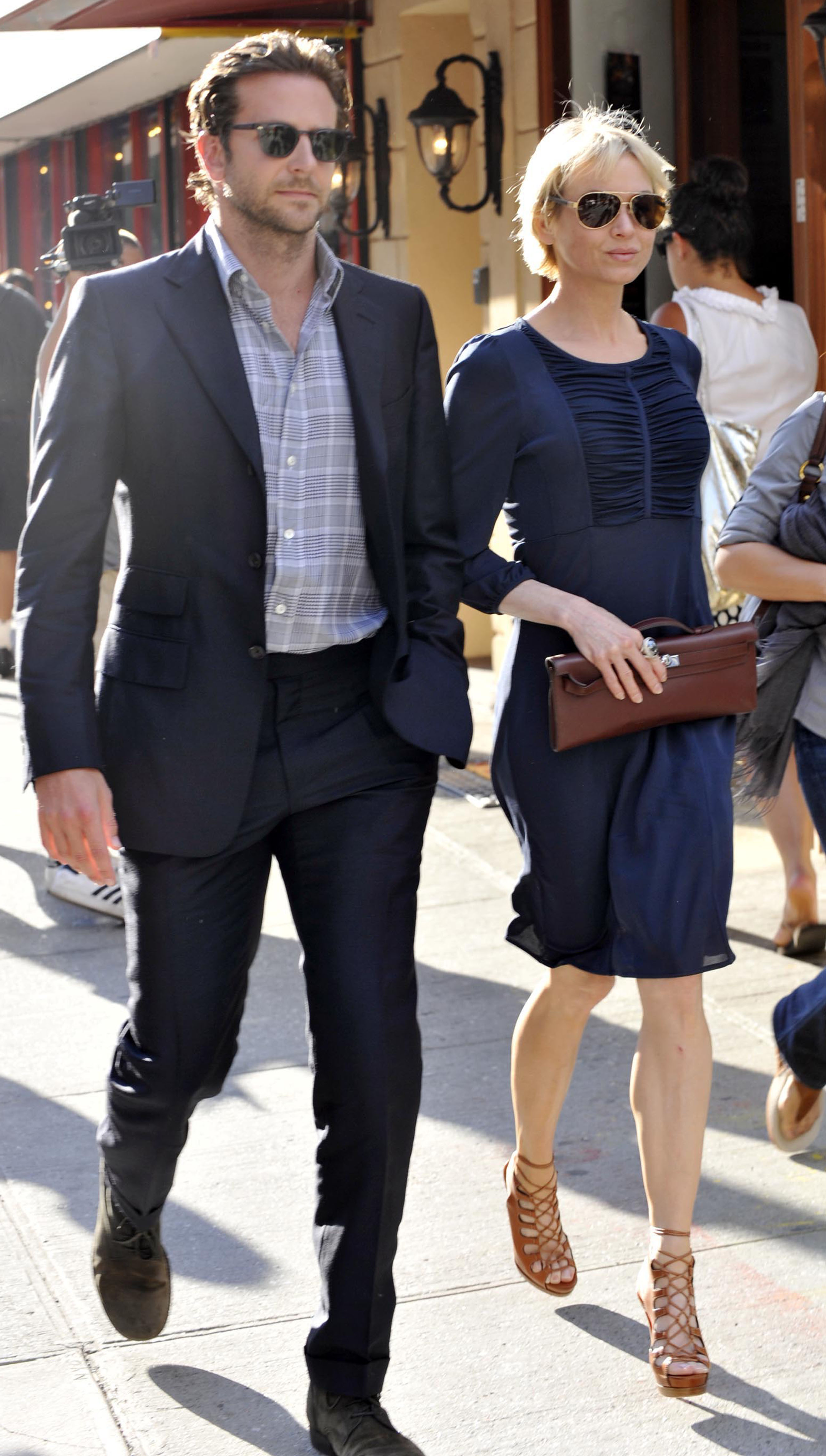 In the programme Renee says she sympathises with the pressure women feel to keep up appearances, combined with the expectation of finding a man and starting a family.

She says: “Ridiculous things, like how much we weigh or what we look like in a dress or our hair or whether or not we’ve achieved this list of things that others value by the time we’re 30 or 40 or 50.

“She struggles with it and she tries and she fails, like all of us. What it boils down to in the end is self acceptance.

“I think it’s appreciating that being imperfect is what you’re supposed to be.”

Renee split from guitarist Doyle Bramhall II in 2019 after seven years, the latest in a string of high-profile separations that have characterised her roller-coaster love life. Previous partners have included actors Jim Carrey and Bradley Cooper, and rock star Jack White, of the White Stripes.

Renee, who has no children, believes being a single woman carries a fear of loneliness that men don’t feel — a fear which is at the heart of the Bridget Jones story.

She says: “It’s one of those things that makes us human, isn’t it? We hope to be loved and hope to love someone and share our lives in some capacity. For a lady, sadly, there’s this pressure and this sort of unspoken judgment.

“If you’re not cherished by someone, if a man doesn’t find you and treasure you, then your worth somehow comes into question. It’s just the reality of being a lady.” 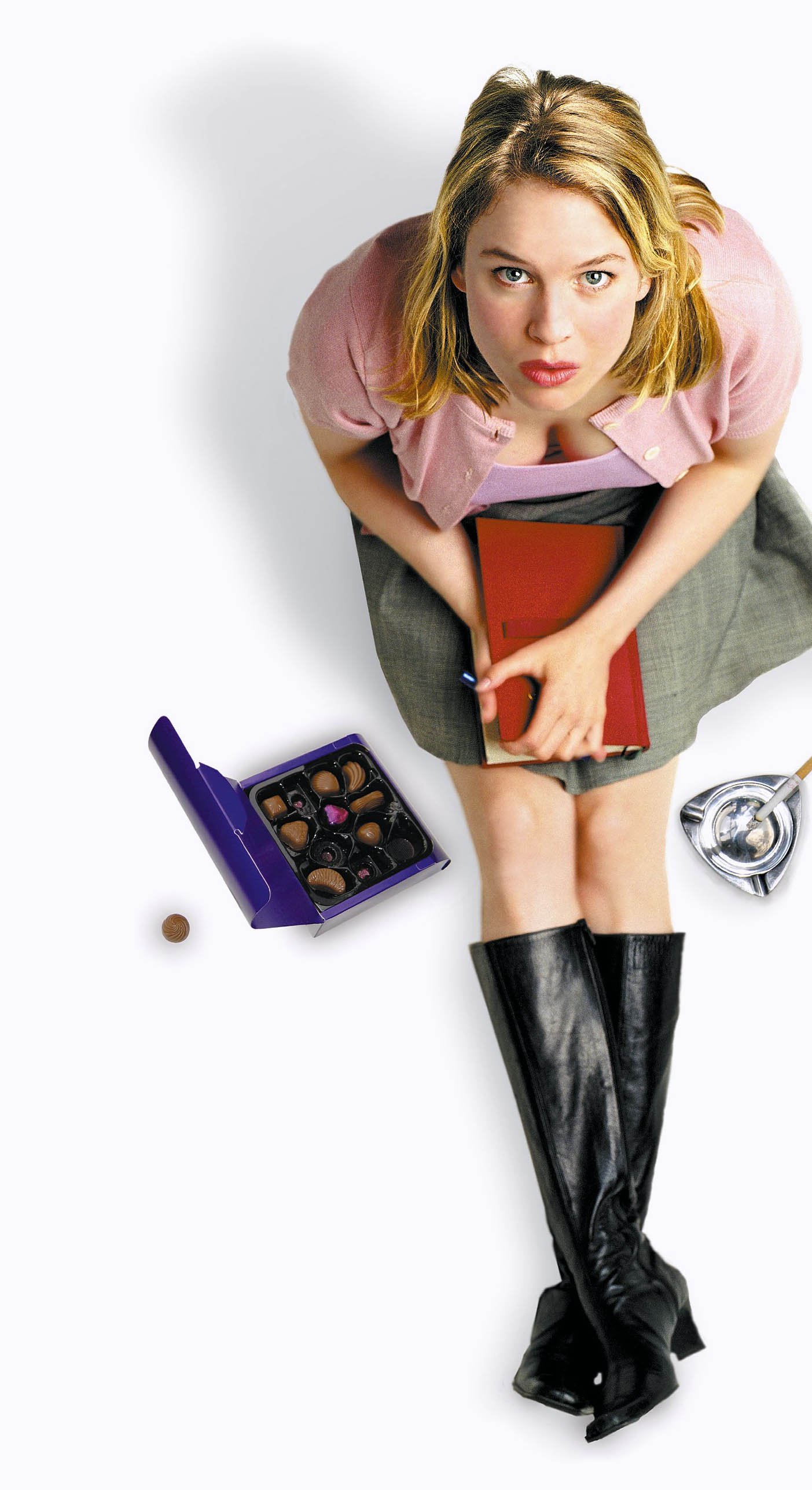 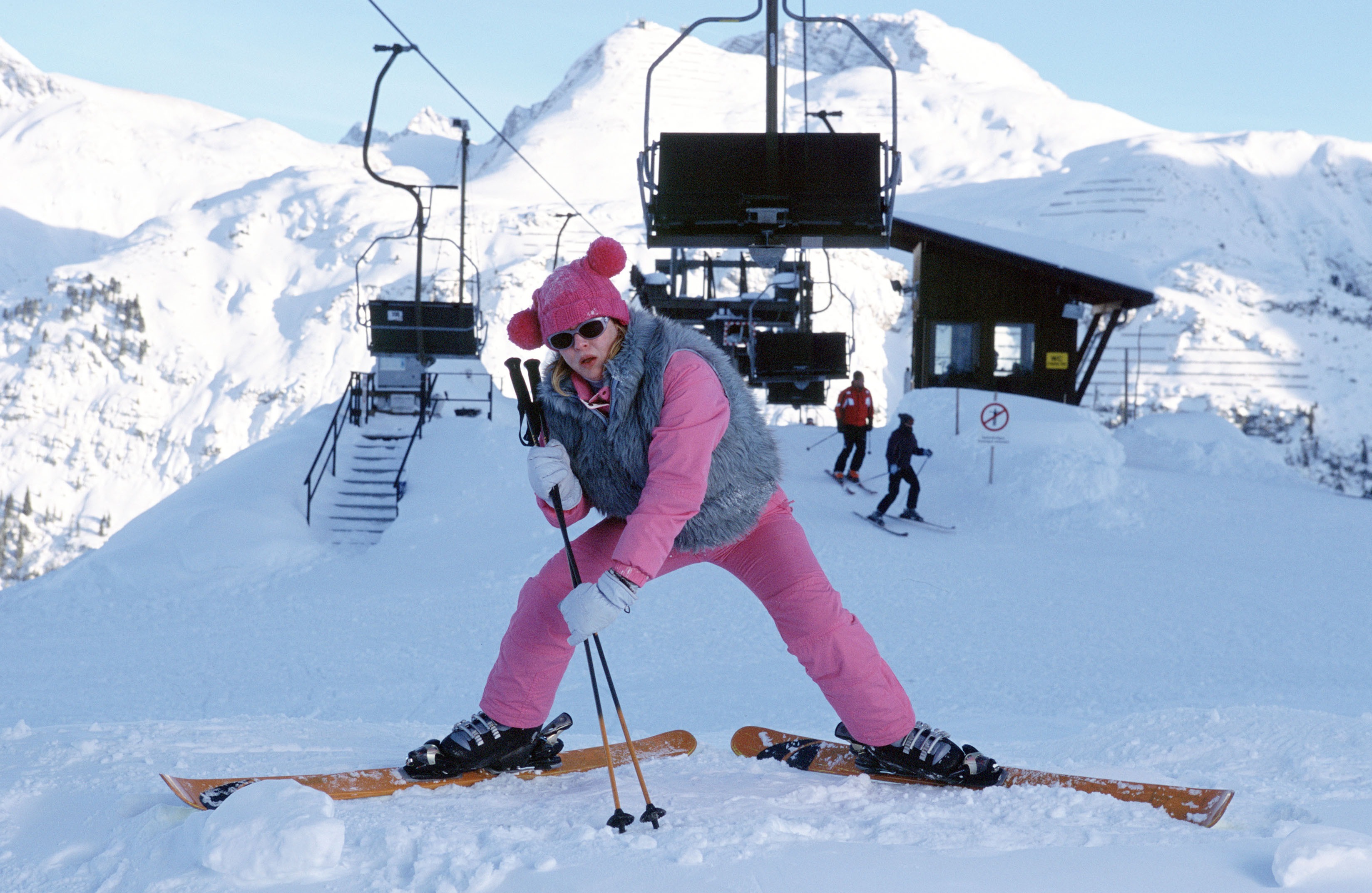 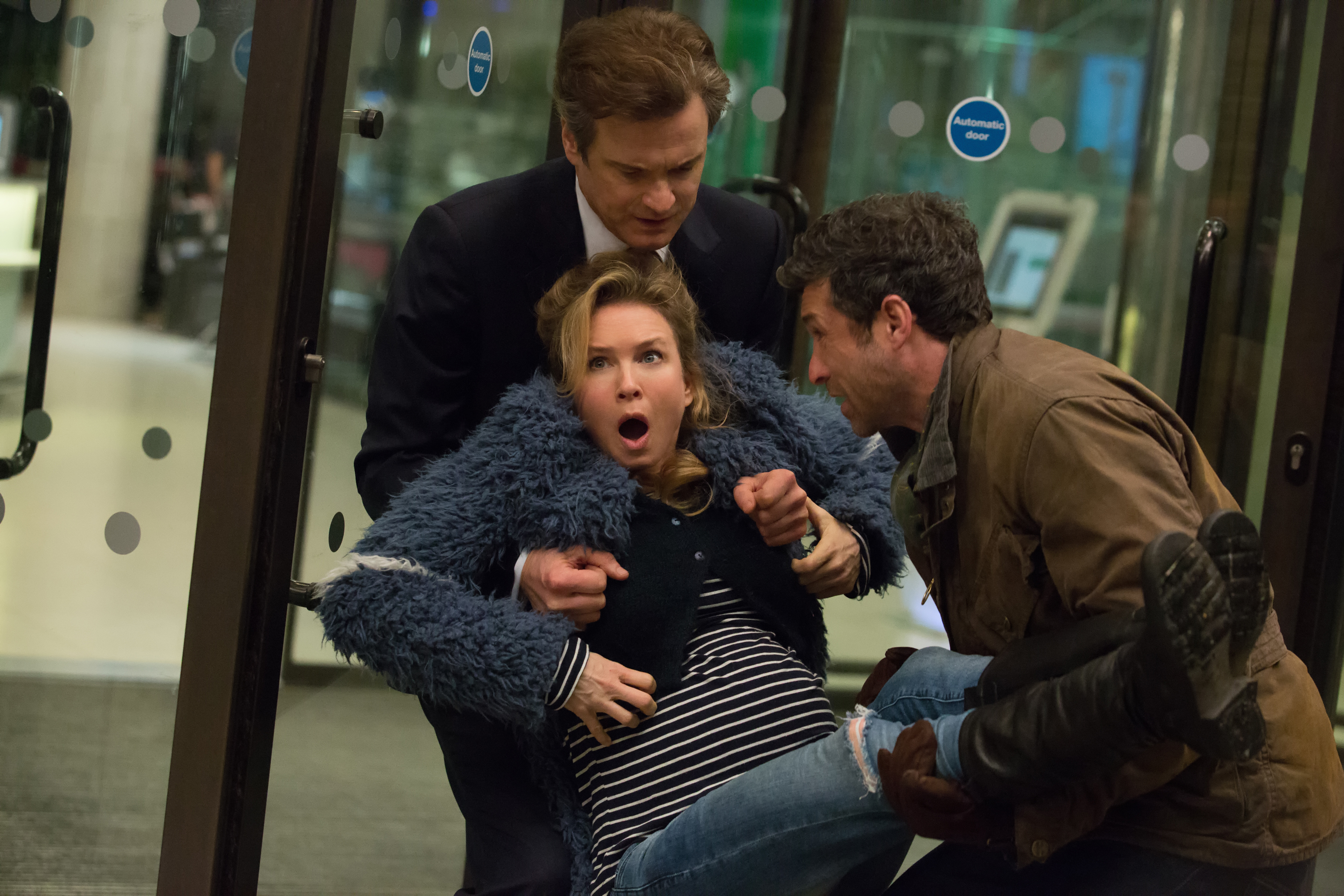 Where Renee’s life does differ is that Bridget did go on to find love and start a family, in the movie sequels Bridget Jones: The Edge Of Reason in 2004 and Bridget Jones’s Baby in 2016.

And more positively, unlike Bridget, Renee has had a stellar career. She got her big Hollywood break in 1996 Tom Cruise film Jerry Maguire, then after the first Jones film had a string of hits.

They include the lead role of Roxie Hart in the film version of the musical Chicago in 2002, and playing the writer Beatrix Potter in 2006 biopic Miss Potter.

But from 2008 almost every movie Renee made bombed, and in 2010 she quit showbiz to travel, study and produce a TV show.

Then last year she made a triumphant comeback, portraying tragic star Judy Garland in the biopic Judy — and landing the Best Actress Oscar.

Yet despite her achievements, Renee believes all women still always have to wrestle with their identity and struggle to feel acceptable to society.

But in fact she does know all about winning acceptance. In 2000 there was outrage when it was revealed that Texan-born Renee would play Londoner Bridget.

In the new documentary, Hugh Grant says her first attempts at the accent sounded like the late Princess Margaret.

Getting it right was crucial. Although many fans already knew Bridget from Helen’s novels, the woman who was brilliantly terrible at her job as a book publisher’s assistant was now being introduced to a wider audience on screen. 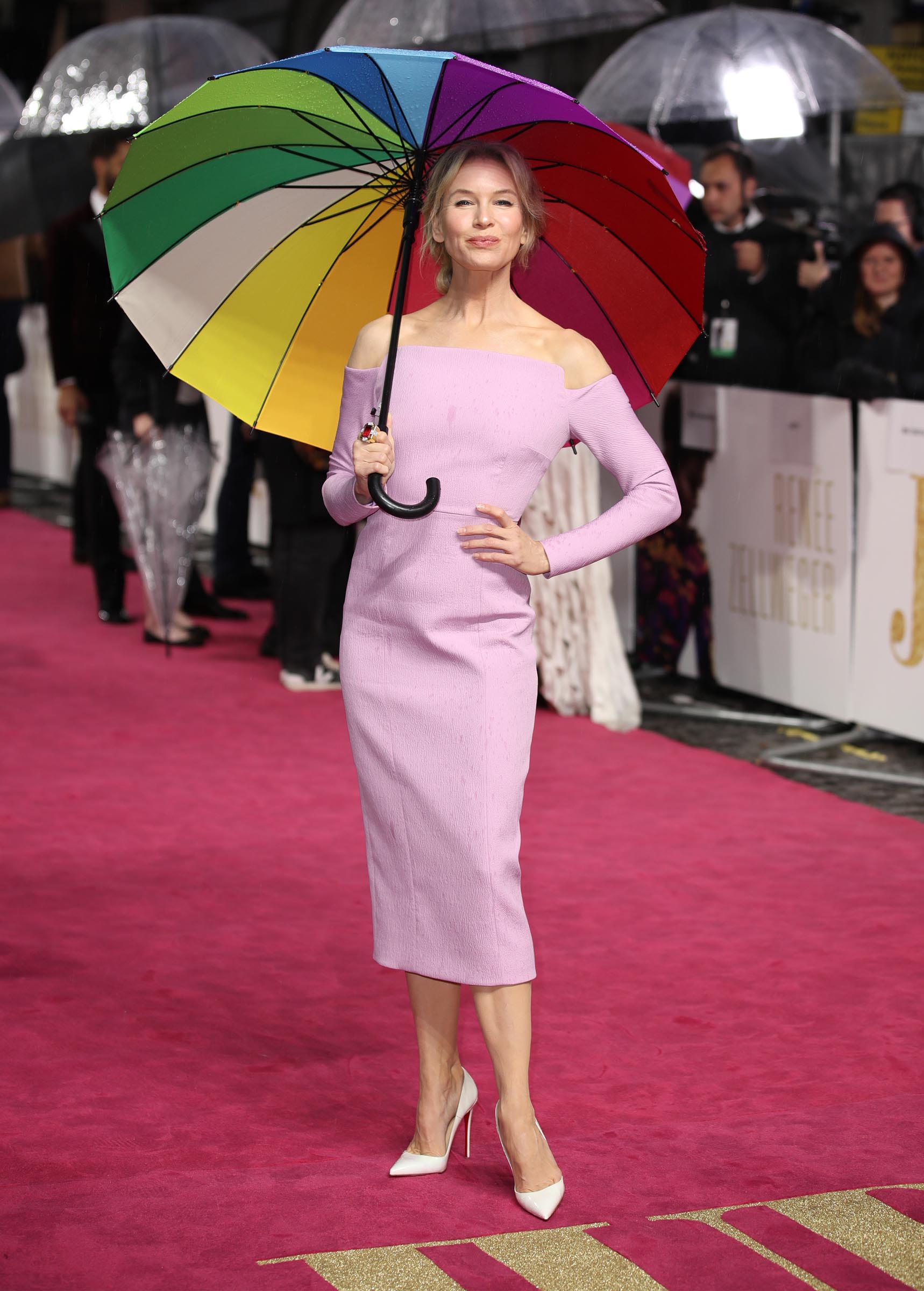 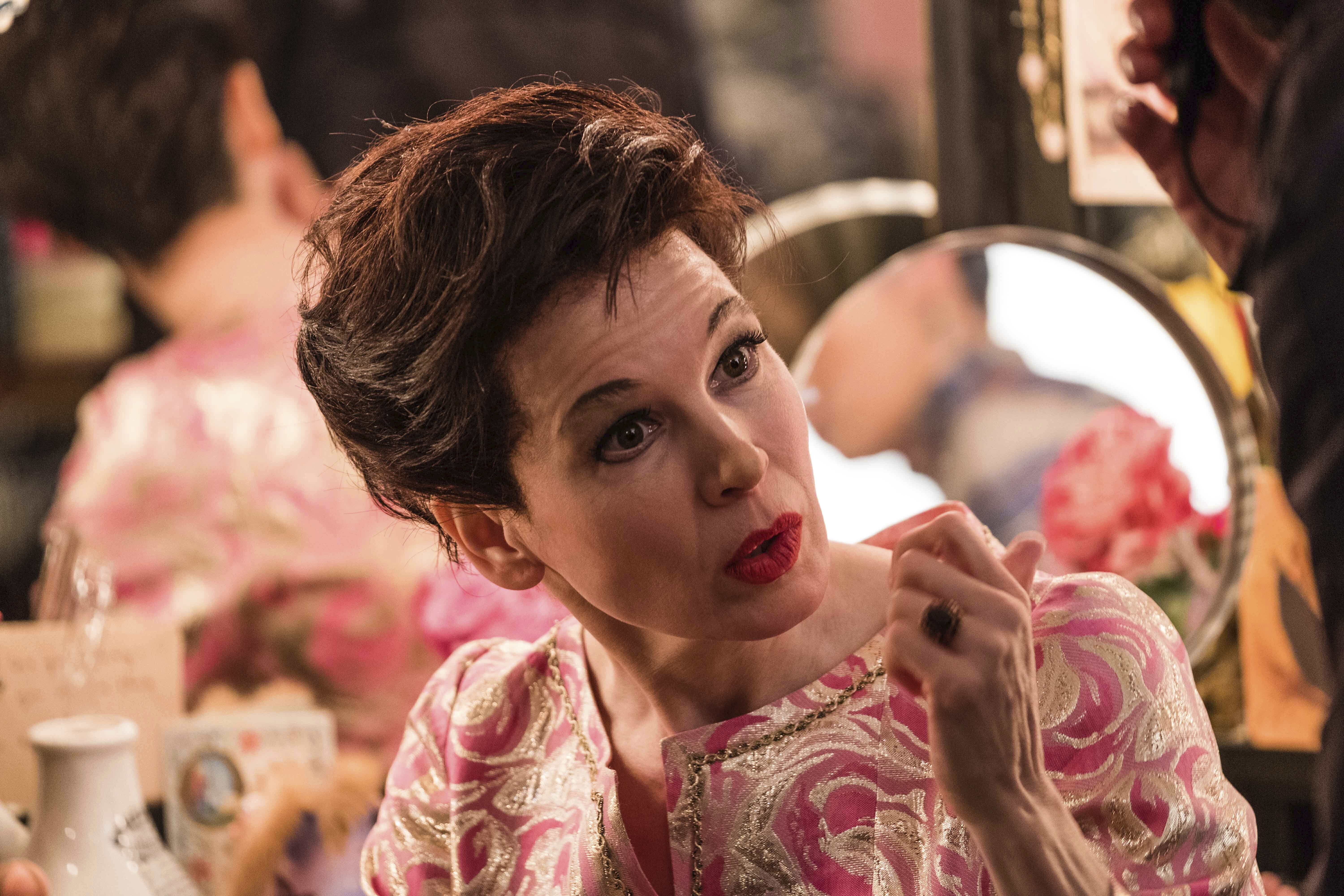 But Renee won over the sceptics after some serious research for the role and, she says, realising Brits have an over-polite way of talking.

She adds: “I got a job at a publishers so I could understand what that was like, and it taught me lots of things about publishing, about book launches and filing and making the coffee. I found that, ‘Oh, I’m gonna have to figures this out’ where you don’t come right out and say, ‘I hate that’, you say, ‘Perhaps another might be better’.”

Having mastered the manner-isms and voice, Renee had no problem perfecting the disastrous Bridget Jones “moments” which make the films so funny.

She says: “A Bridget Jones moment is hard to describe, but I know it when I see it.

“I think in Bridget Jones’s Baby, the mud moment is one of my favourites. I also loved it when she has to go to a formal affair but she can’t go up the stairs as her dress is too tight — I’ve been there.”

And despite still being constantly remembered as Bridget after nearly 20 years, Renee con-siders the films a total blessing.

She says: “I make friends every day because of Bridget. Someone comes up and says, ‘I learned this from Bridget’ or ‘She means so much to me’. What a gift.”

ENORMOUS PANTS: AFTER the release of her candid diaries, the rather large underwear worn by women to flatten their tummies would forever be known as “Bridget Jones knickers”.

FORGING CHICK LIT: THE diaries were also one of the earliest and most successful examples of “chick lit”, a sub-section of fiction which boomed after Bridget, with many writers using the story as a template for their own work.

BUNNY BOILER: REFERS to Glenn Close’s character Alex in 1987 film Fatal Attraction, who took revenge on the lover who spurned her by boiling his daughter’s pet rabbit. But it was only after Bridget used the phrase that it was adopted widely.

SMUG MARRIED: ANOTHER phrase from the diaries which was suddenly used by everyone. It refers to couples who like to hang out with other Smug Marrieds and rub other people’s faces in their domestic bliss.

SINGLETON: FOR centuries men had usually used the term “spinster” to describe more mature women who had yet to find a man but the diaries coined this more gender-neutral phrase.

ABBREVIATIONS: TO make maximum use of every diary page, Bridget used abbreviations which everyone suddenly started adopting too – the most obvious being “v good” instead of “very good”.

EMOTIONAL F***WITTERY: WHILE Bridget toned down her language about single women, she ramped it up when referring to the emotional stupidity of men, coining this brilliant phrase.

DOING A BRIDGET: THIS became shorthand for going out, getting drunk with your mates, smoking too many fags and falling out of a taxi at 2am before leaving a voice message or sending a text you would regret when you woke up the next day.

CHARDONNAY: IT was Bridget’s tipple of choice, and by the early Noughties it seemed every party girl and single woman was necking the white wine on nights out. But its common consumption and association with her drowning her sorrows in chardonnay was blamed for sales plummeting.

NOVEL ACHIEVEMENT: BRIDGET Jones’s Diary is one of the 100 most important novels in the English language, it was decided by a panel of experts last year.
Helen’s book was up there with Jane Austen’s Pride And Prejudice and George Orwell’s 1984.