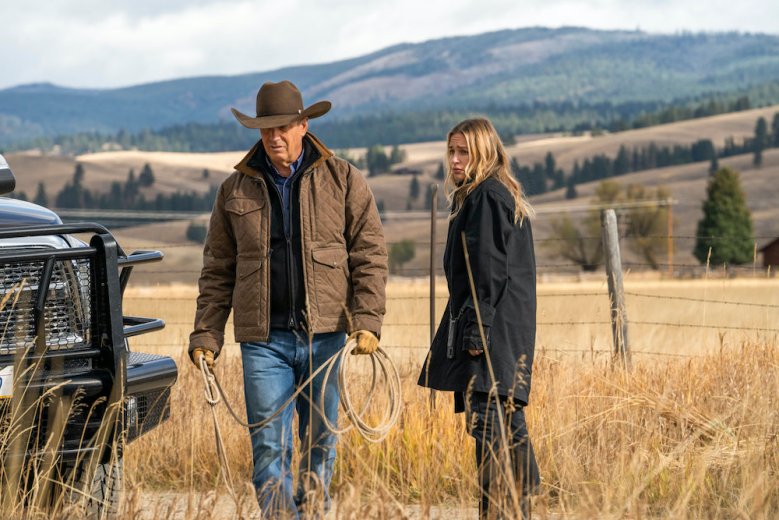 Voros credited Sheridan and season one director of photography Ben Richardson with establishing an approach to lenses and camera placement that further showcases the beauty of the locations. “We lean into the longer end of the lens, which may seem counterintuitive because on our iPhones we all want to go as wide as possible to capture as much space as possible,” she said. “But that’s not how our eyes see things, so rather than shoot a wide shot of a field on a 25mm lens, we’ll go back a mile and shoot it on a long lens. It’s not uncommon for us to use a doubler on a 400mm. There’s something about the compression when you have all these layers of the Montana topography that gives it a heightened subjectivity — you feel like you’re in the space.”

The lyrical passages showcasing the land that provide some of the show’s most pleasurable moments are punctuated by their stylistic opposite, brutally violent set pieces that show just what the characters are willing to go through to hold on to that land. Season four, for example, opens with a nerve-shredding 13-minute sequence in which multiple characters come under siege in escalating action including bombs, car chases, and gun fights spread across several locations. For Voros, shooting such a sequence requires a delicate balance of planning and being responsive to whatever surprises emerge in the moment, a skill she learned in her earlier life as a documentary filmmaker. “The beauty of shooting multiple cameras is that you have the ability to control and be incredibly precise, and you also have the breadth to catch the magic when it happens,” she said. “When you look at that season premiere, there are pieces that are very much designed, and there are pieces where the sun happens to be in the perfect place at the perfect angle and you could not have gotten that if you planned it for weeks.”

Voros trusts her operators — who she contends are the best in the business — to catch those unexpected moments on the fly. “The idea is once you’ve achieved your objective, if you see something else happening, go get it,” she said. “I think getting those extra layers on top of what has been storyboarded is what makes the show feel more elevated.” Voros also tries to extend that flexibility to the actors: “I’m always looking for the balance between visual power and giving the actor freedom to make choices. I like to light spaces so that the actors can move in those spaces and not feel entangled by the technical requirements. I never want to say to Kevin Costner, ‘Oh, that was beautiful but you stepped outside of your light.’ The show is incredibly taxing on the actors, because we block shoot four episodes at a time. An actor could be doing episode three in the morning and episode six after lunch. I’m very conscious of giving them the room to lean into their craft.”

Voros’ role on “Yellowstone” has evolved since season one, when she began as a camera operator. She was promoted to director of photography during season two, then was unavailable to shoot season three but came back for two episodes as a director. For season four she photographed six episodes and did double duty on two of them, serving as director and director of photography. (Cinematographer Dino Parks shot the other four episodes.) “It’s not something I would do in another environment, but because we’ve had basically the same crew for four years there’s an enormous shorthand,” Voros said. “I know the show, and I feel like it takes less time to set the cameras and design the lighting plans myself than it would to talk to another DP about what I want. But you know, we’re a well-oiled machine. There’s no learning curve to catch anybody up on.”