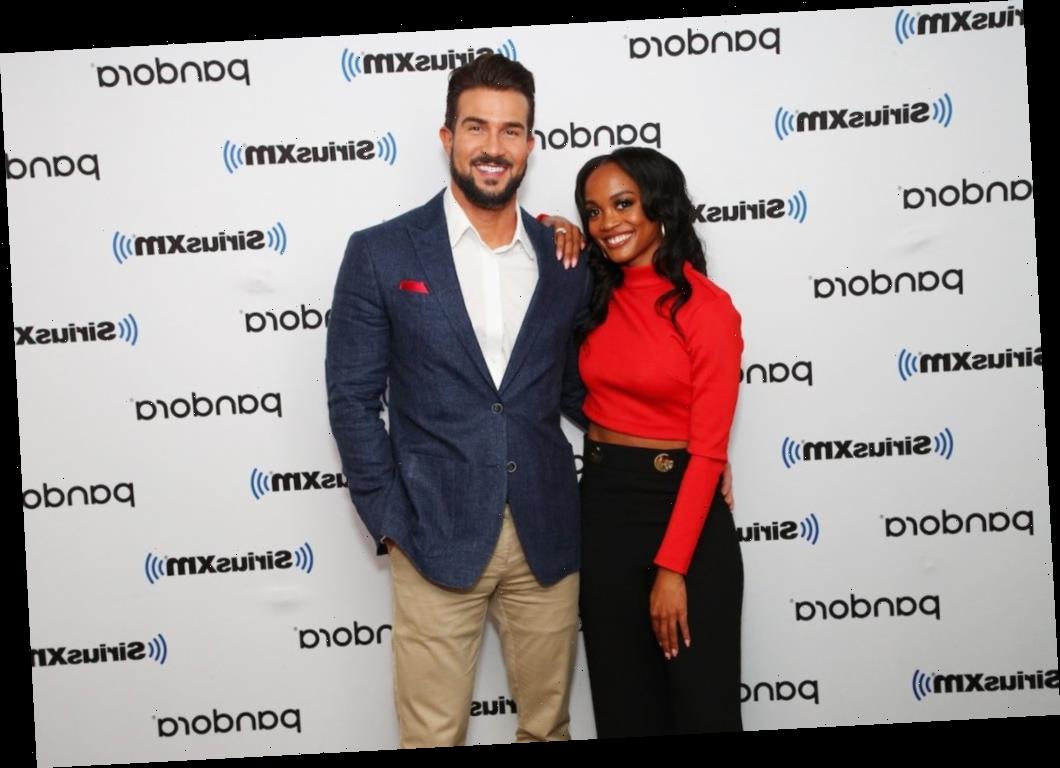 After the Rachel Lindsay interview with Chris Harrison, many contestants from Bachelor Nation have spoken out against the host’s words. Lindsay’s husband Abasolo spoke on his podcast Talking It Out. He condemned franchise host Harrison for what he said in an interview the previous week. Read on to see what Abasolo had to say about The Bachelor host Harrison ahead.

First, Abasolo joined Lindsay’s cast for The Bachelorette back in 2017. He swept her off her feet in the first night, kissing Lindsay and winning her first impression rose. During the season, Abasolo continuously impressed Lindsay. Finally, she picked him in the end, despite Reality Steve spoilers initially saying otherwise.

Following weeks of dating on the show, Abasolo proposed to Lindsay in the finale and the two married a couple of years later in 2019. The two remain together to this day.

After the franchise’s host defended Kirkconnell’s picture wearing Old South clothing and her past social media usage, Abasolo criticized Harrison and the franchise.

What Chris Harrison said in the Rachel Lindsay interview

The interview between Harrison and Lindsay showed that the franchise host was sympathetic toward Kirkconnell.

“First and foremost, I don’t know,” Harrison said about his thoughts regarding Kirkconnell’s social media posts. “I haven’t talked to Rachael about it. We all need to have a little grace, a little understanding, a little compassion.”

He continued: “I have seen some stuff online, again, this judge, jury, executioner thing where people are just tearing this girl’s life apart… until I actually hear this woman have a chance to speak, who am I to say any of this… I saw a picture of her at a sorority party five years ago that’s it.”

After that, Harrison announced that he will take a temporary leave of absence from the show. He will not appear at the After the Final Rose special. He usually hosts it to interview contestants and the final couple.

Next, Abasolo spoke his mind about the interview on his podcast with Mike Johnson, Talking It Out. Interestingly enough, Talking It Out is “presented” by Bachelor Nation. This means it’s an official bachelor podcast just like Linday’s Bachelor Happy Hour.

What Rachel Lindsay’s husband said about the Chris Harrison interview

On the February 15 episode, Abasolo did not hold back.

“I was very disappointed,” he started. “Chris Harrison is someone that I respected highly. And not gonna lie, I definitely lost respect for him after watching that interview.”

“I thought what he said was irresponsible, it was hurtful,” Abasolo expressed. “It was flat-out unacceptable. Now, we’re not talking about past contestants of this show who pretty much come and go, right? We’re talking about the face of this franchise, 20 plus years of this man being on our television screens. On a show that’s been needing a diversity makeover for years, I don’t think anybody’s gonna deny that.”

However, Abasolo stated he thought that the franchise “had finally” began “turning the corner.” For example, he noted Lindsay being the first Black lead of the show in 2017. In addition, Abasolo also expressed that he thinks the franchise “missed the opportunity” by not selecting his co-host Johnson as the first Black bachelor.

Then, Lindsay’s husband said in 2020 that there was a “mad scramble to finally get it right.” This was amidst Black Lives Matter protests and the Bachelor Diversity Campaign led by audience members.

“We then saw Tayshia become the bachelorette and finally we see our first male Lead of Color in Matt James,” he continued. “It’s like, ‘OK they recognize it, and they’re working on the diversity — albeit, better late than never — but they’re working on it nonetheless.’”

He concluded by speaking about Harrison’s interview with Lindsay.

“Chris comes out and says this, and to me, it made me wonder, ‘Damn is this how everybody at the top feels,’” Abasolo asked. “Is this the sentiment that we’re trying to overcome still in 2021? It’s like, ‘I don’t know, you tell me Chris, because you said it with your whole chest in that interview.’”