Daredevil‘s third season just dropped on Netflix, with critics hailing the new 13-part run as a thrilling return to form for the Man without Fear.

The new season features the epic resurgence of Wilson Fisk (Vincent D’Onofrio), the tragic origin of Bullseye (Wilson Bethel) and – in episode 4, ‘Blindsided’ – the show’s most breathtaking action sequence to date.

(Heck, it might be one of the greatest action sequences ever, in any medium.)

The early episodes of the season see Fisk strike a bargain with the FBI, being afforded certain privileges – including release from lock-up – in return for intel on other criminal outfits.

In ‘Blindsided’, Matt Murdock (Charlie Cox) infiltrates a prison to investigate a link between Fisk and an Albanian crime syndicate, a connection that he believes will invalidate Fisk’s deal. But Fisk is one step ahead of Murdock, using his connections to trap his foe in the prison. 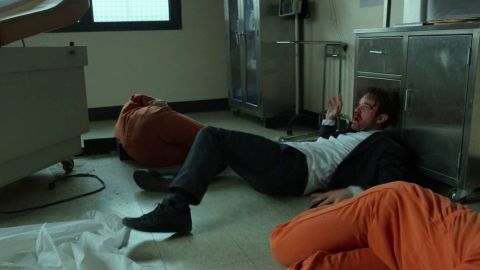 Matt is soon forced to defend himself from convicts on the loose and corrupt prison guards alike. Exhausted and bloodied, our desperate hero fights his way down a series of corridors, eventually reaching Albanian crime boss Vic Jusufi (James Biberi), with whom he strikes a deal to work together against Fisk.

Murdock is then escorted to safety by one of Vic’s heavies (disguised as a guard). He exits the prison, before collapsing, exhausted, into a taxi waiting outside. 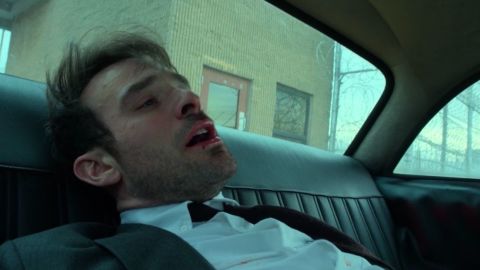 All in all, the sequence – from Matt ending his phone conversation with Fisk to the final moments in the taxi – spans 11 minutes… and incredibly, it was all shot in a single take.

Speaking exclusively to Digital Spy about filming the epic sequence, Daredevil star Charlie Cox revealed that an entire day was allocated just to rehearsing the prison fight and Matt’s escape, with full cast and crew.

“Every day of a TV show is incredibly expensive, with the amount of organisation and the amount of crew members [required],” Cox said. “But they actually gave us an entire day off just to rehearse, with everyone. Not just the stunt team and the actors, but also the camera crew, the sound department.

“We all went up to that prison a day early, and all we did was rehearse it all day. And then we came back the following day, and we rehearsed in the morning, and then we started shooting mid-morning.” 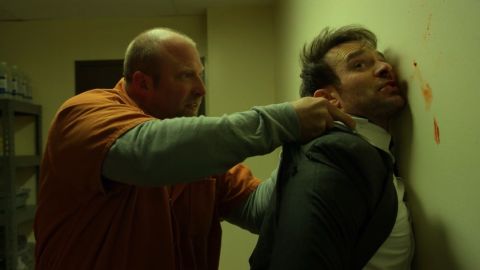 Even with those special measures, though, Cox admitted that he “didn’t think it was achievable” to shoot the entire 11-minute scene, which features dozens of actors and supporting artists, in one take. Instead, he anticipated that editing cheats would have to be used to give the impression that it was filmed in a single take.

“I didn’t think we were going to get one take that was good enough,” he confessed. “I thought we were going to have to piece it together in the cut – you know, in the edit. Erik [Oleson, showrunner] had cleverly put in a couple of moments where it was possible to [cut], if we had to.

“But what ended up happening is… we did a couple of takes that were quite good, and then we had a couple of false starts. And then after lunch, we came back, and we just had this one take that went monumentally well, and every single moment worked.

“We couldn’t believe it. There were huge celebrations and cheering.”

The only post-production tinkering that went into the final episode was actually to emphasise that the sequence was an honest-to-goodness single take. “Erik said that when he saw it, he actually went back, and, in post-production, he brightened some of the darker moments, so that there would never be anyone who could think that we edited it, that there was any cut,” Cox explained. 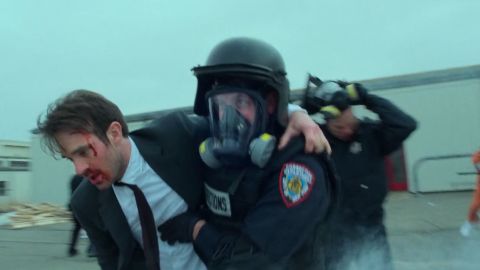 Cox described the “amazing” completed sequence as “a real testament to the stunt team” on Daredevil, calling for the team and his stunt double Chris Brewster to receive awards recognition for their work. “Let’s see if the Emmy board can leave them out this year! I find it amazing that they don’t get included more often, but hopefully that’ll be rectified now.” 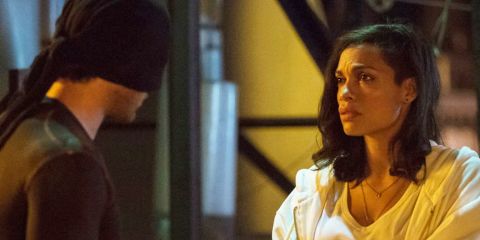