Show bosses have cast former Home and Away star Kyle Pryor in the role of Sinead O’Connor’s new husband Laurie, who made his first appearance in Wednesday’s first-look episode.

Although Laurie has made amends with Sinead following his return, it quickly became clear that he hadn’t actually been honest with her at all after Sami overheard him making a panic-stricken phone call.

Tonight’s first-look scenes will see Laurie beg Sami for legal help in the aftermath – explaining that someone is threatening to go to the police with false allegations about him.

Unsurprisingly, Sami is reluctant to help Laurie given their earlier run-in – insisting that he needs to talk to Sinead instead.

The clip above shows Sami warning Laurie that secrets always come out in the end, imploring him to be honest with Sinead before she hears from someone else.

Viewers will have to wait and see whether Sami’s words have the desired effect on Laurie, but what is going on? And will Sami be able to help him?

Hollyoaks airs weeknights at 6.30pm on Channel 4, with first-look screenings at 7pm on E4. 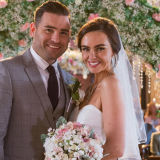 Digital Spy Soap Scoop video – hit play below for all the latest Hollyoaks spoilers, as Mercedes and Russ’s wedding day arrives and there’s a cameo from two Loose Women!