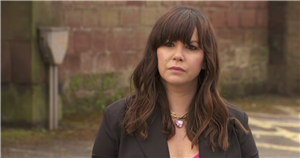 The former couple have recently decided to give their relationship another go but things didn't go quite to plan during Wednesday's first-look episode on E4.

Darren planned a romantic meal for Nancy and he dressed for the occasion wearing a black tuxedo.

Nancy look incredible as she donned a hot pink dress minidress with an over-the-top trail following behind.

She styled her trademark brunette tresses in loose curls and completed her look with a pair of black boots and some glamorous makeup.

Fans of the Channel 4 soap rushed to their keyboards to discuss Nancy's latest look as she prepared to spend the evening with Darren.

Taking to Twitter, one fan penned: "Nancy is looking FOXY!!"

Another added: "Nancy looks so pretty."

However, the pair didn't even make it to the venue as Nancy discovered that Darren had previously taken his ex Mandy Richardson (Sarah Jayne Dunne) to the same restaurant.

To make matters worse, it was later revealed that Darren wined and dined Mandy in the said posh restaurant when he was seeing her behind Nancy's back.

Darren managed to sweet talk Nancy around once again towards the end of the episode but Mandy interrupted the couple just as they were about the share a kiss.

Hollyoaks spoilers have revealed that things are about to get even worse for the lovers as Darren is left fighting for his life in upcoming scenes.

He gets injured during the re-opening of The Loft when the nightclub sign falls on top of him.

Darren attempts to work out whether he wants to be with Nancy or Mandy and before long, he makes his choice.

He instructs Mandy to meet him at The Loft but before he can speak the sign comes crashing down and he’s left fighting for his life as a result.

Mandy later confronts Nancy and demands to know what exactly went on between she and Darren prior to the accident.

Hollyoaks airs weekdays on Channel 4 at 6.30pm followed by first-look episodes on E4 at 7pm