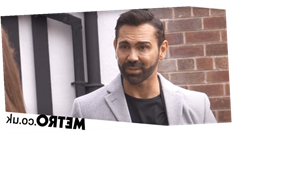 Hollyoaks has revealed that Tom Benedict Knight has been cast as Denise Welch’s on-screen love interest.

It was announced last year that Coronation Street and Loose Women star Denise Welch is set to join the cast of the Channel 4 soap.

Denise will portray Maxine Minniver’s (Nikki Sanderson) mum Trish, and it has now been revealed that Tom Benedict Knight will be playing her handsome but manipulative boyfriend, Brad King, who arrives alongside her.

Tom played the roles of Angel alongside Julianne Moore in Kingsman: The Golden Circle and Dash Houdini in the TV series, Houdini, opposite Adrien Brody.

Brad and Trish’s arrival will certainly come as a shock to Maxine who — since arriving in the eponymous village back in in 2012 — has been through a lot without her immediate family around her!

Speaking about joining the cast of Hollyoaks, Tom said: ‘I am really thrilled and excited to have joined the Hollyoaks family. It has been awesome on set, fast-paced, and never a dull moment working with the great cast and crew.’

‘Working with Denise and Nikki has been absolutely fantastic, both are super talented actors who are a delight to work with, and have had me in stitches non-stop!

‘Brad is definitely here to stir things up in Hollyoaks… Get ready for a lot of bad behaviour and broken hearts. There’s a new BAD boy in the village…’

Brad and Trish will arrive in Hollyoaks w/c 18th January.