Holly Willoughby was left utterly mortified on This Morning when she tried to sneak a quick text in during the advert break – only to accidentally message a man about a ‘bra’ instead of a ‘barbecue’.

Oh autocorrect typos… we’ve all been there!

Shortly before the ITV programme came to an end on Thursday, viewers returned to the studio with Phillip Schofield and Holly, where it was clear that something awkward had just happened.

Turning to the camera, Holly explained the excruciatingly embarrassing text blunder that had just occurred, which she was unable to fix as the show had recommenced.

‘To the person that I have just sent a text message to very quickly in the break where I was about to say “I need a new one” and sent it and thought, “Ooh, I’ve just got away with that with five seconds back on air,” and then looked down at it and “one” has been replaced with “bra”, where it said: “I need a new bra” – I don’t need a new bra, I completely apologise,’ she said.

As Phillip tried to contain his laughter, Holly explained that she had been trying to say that she needed a new barbecue, leaving her co-star bemused as to why she would need one at this time of year. 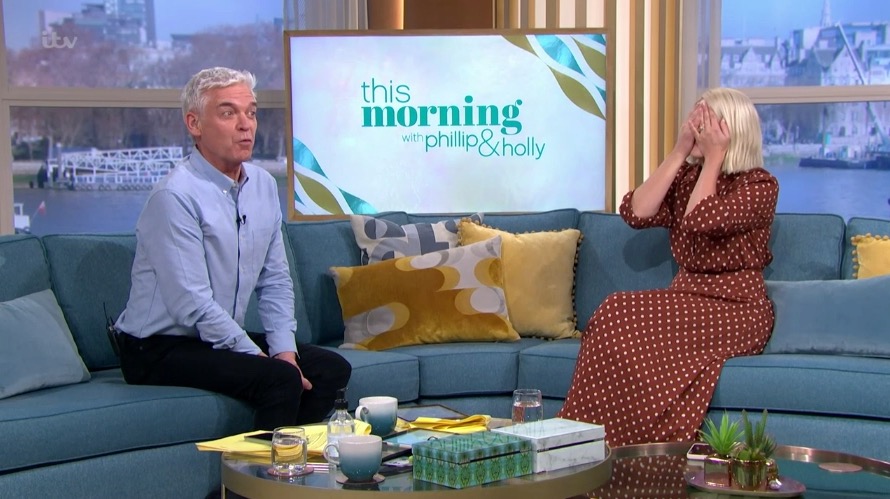 Holly admitted that the message had been sent to a man, exclaiming in horror: ‘I haven’t got time to correct it!’

When Phillip asked if she had received a reply yet, she said that she hadn’t… but upon looking at her phone, she realised that they had responded, much to her immense humiliation.

‘Thanks for letting us know but I’m not sure this is meant for us,’ the text read, as Phillip threw his head back in hysterics.

As the show segued to the fashion segment – which was going to feature sports bras, funnily enough – Holly quickly grabbed her phone to rectify the situation as details of a competition appeared on screen.

One This Morning viewer who found the turn of events hilarious, tweeted: ‘Sorry but Holly has just made my day.’