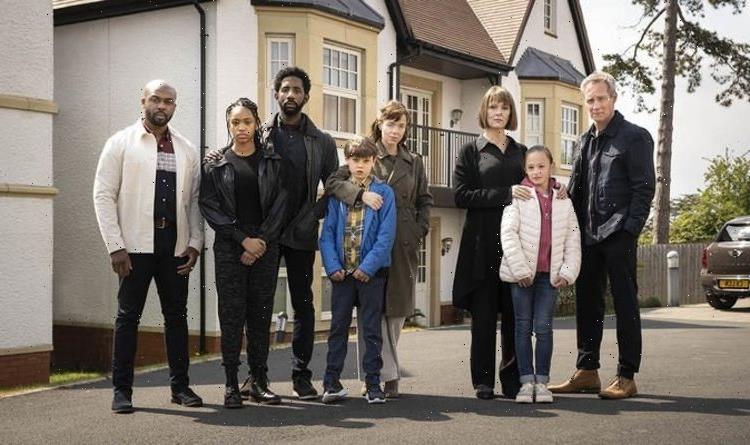 Hollington Drive is a new four-part thriller series that will be arriving on ITV very soon. The highly-anticipated series boasts a star-studded cast, with familiar faces from Line of Duty and The Haunting of Bly Manor. Express.co.uk has all you need to know about the upcoming series.

When is Hollington Drive out on ITV?

News of the series first came to light in February 2020 and it has been created by screenwriter Sophie Petzal.

In May 2021, the cast list for the thriller was announced, but sadly no release date has been given yet.

A promotional photo of the cast has been revealed, which suggests production will be underway very shortly in Wales.

The series is expected to air this month, in September, but an official date is yet to be announced.

Who is in the cast of Hollington Drive?

Some huge names are joining the cast, including Line of Duty’s Anna Maxwell Martin, who played the antagonistic Patricia Carmichael.

In Hollington Drive, she will play one of two sisters called Theresa.

Rachael Stirling, known for her roles in The Bletchley Circle and Doctor Who, will play the second sister Helen, who is a headteacher.

Jonas Armstrong has also just been cast in the series.

Is there a trailer for Hollington Drive?

Sadly as casting has only just been announced, there is no trailer for the series at this moment in time.

Hopefully, ITV will release a trailer a couple of weeks before the series is due to air, so viewers may see a video before the end of the year.

In the meantime, they can keep up to date with ITV’s social media channels for more information.

Viewers enjoyed watching Maxwell Martin in the sixth season of Line of Duty, so they will be keen to see her in a new project.

What is Hollington Drive about?

Theresa and her sister Helen often spend time together and in the opening scene, their families are enjoying a barbecue in the sun.

Theresa’s 10-year-old son, Ben asks to go to the park with his cousin Eva, and the adults are not too sure.

Fraser is relaxed about the situation, but Theresa fears the worst will happen.

Viewers will be keen to find out whether Theresa’s son and his cousin know anything about Alex’s disappearance.

Executive Producer Jonathan Fisher said: “We’re so excited to have started filming on Hollington Drive, and to have attracted a top-rate cast led by the exceptional Anna Maxwell Martin and Rachael Stirling.

“We can’t wait to share this captivating and surprising story with the ITV audience.”

Viewers are already expressing their excitement over the top-class cast and hopefully, more information will come to light soon.

Hollington Drive will air on ITV.