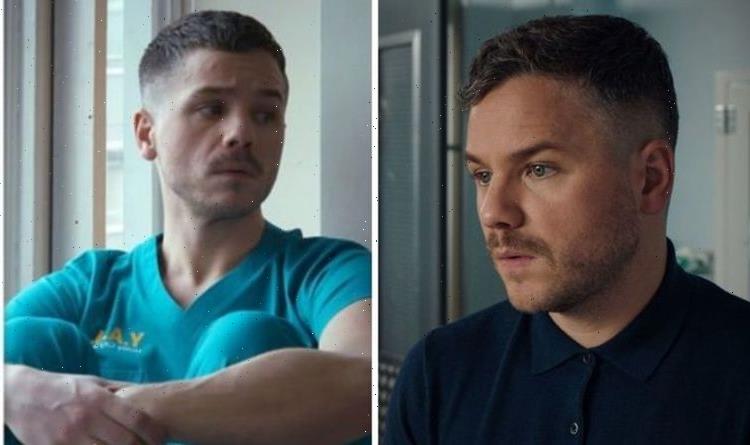 Speaking exclusively to Express.co.uk, David, 38, has played the role of manipulative Dominic since 2013. As the BBC drama sadly draws to a close after establishing itself as a BBC staple since 1999, David opened up about how the cast were feeling as they filmed their final episodes, admitting everyone was “emotional”.

The BBC decided to axe the medical drama earlier this year and the final episodes are set to air in early 2022.

Recalling the moment the cast found out about the axe, David explained: “It was one of these things had to kind of filter down through the appropriate channels and we all got told sort of en masse.

“And yeah, it was a shock for us all. But it’s an amazing show.

“It’s been running for 23 years and that’s pretty incredible in its in itself so we were all just happy that we got to have an appropriate send-off.”

The actor added: “And we got at least six months left of the show from when we were told.

“It was just nice that we knew that we could sort of round all our characters off and our stories and, you know, give it the appropriate send-off that it deserves.”

Speaking on December, 13, David explained he had just started his final week of filming.

“It’s a strange feeling,” he remarked.

“I realised the other week this show’s been a quarter of my life.

“I was like, ‘that’s actually really strange’. It’s quite odd to think about it that way.

“But no, it’s an incredible, incredible thing. But yeah, we’re all a little bit emotional about it.

Teasing the final episodes, David commented: “[They are] lovely.”

He continued: “You know, like Dominic’s dealt with quite a lot in the past, like last week’s episode, and the loss of his adoptive mother and stuff.

“So, you know, my story, Dom’s story has sort of been slowly rounding itself off as it is anyway.

“You know, he’s kind of grown as a character – he has a maturity and is less reliant on lying and being obtuse to people and he’s just kind of found his heart and he found his sort of comfort.

“He’s making better choices, which is great, but you know, the story as it leads up to the end, will be exciting stuff.

“And it’s going to be really, really gorgeous. For all of us to have played and we know that the audience wants to love it as well.

“So there’s lots of little mini surprises along the way.”

Holby City is available to watch on BBC iPayer.