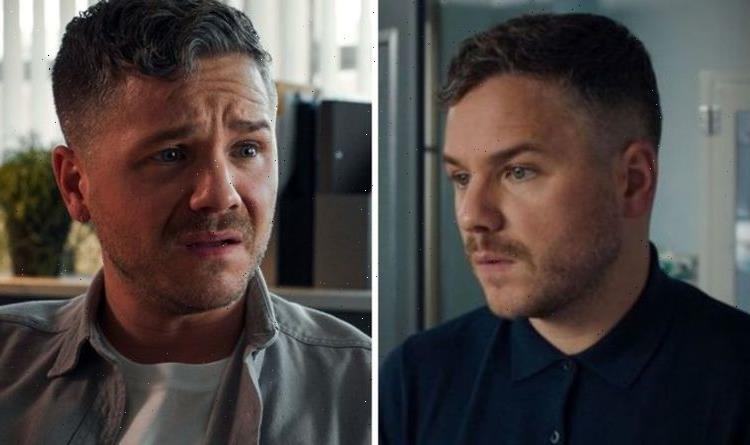 David, 38, has played the role of manipulative doctor, Dominic, since 2013. Speaking exclusively to Express.co.uk, he talked about his final scenes on Holby City and how David’s story will be packed full of “surprises”. The BBC drama will sadly come to an end in March, but the cast has already filmed the last episodes. David revealed what might be in store for the show’s favourites as he detailed what it has been like to be at the centre of the end of an era.

“Dominic’s dealt with quite a lot, with the loss of his adoptive mother and stuff,” David explained.

He continued: “So, you know, my story, Dom’s story, has sort of been slowly rounding itself off as it is anyway.

“You know, he’s kind of grown as a character – he has a maturity and is less reliant on lying and being obtuse to people and he’s just kind of found his heart and he found his sort of comfort.

“But you know, the story, as it leads up to the end – it’s exciting stuff.

“And it’s going to be really, really gorgeous. [It was] for all of us to have played, and we know that the audience are going to love it as well.

“So there’s lots of little mini surprises along the way.”

On the show’s axe, the actor added: “It’s super sad, it’s something I grew up with.

“Holy City has been on in the corner of people’s living rooms for 23 years.

“It’s a huge thing. So yeah, it will be sad, but, you know, this is the acting profession. This is what happens.

When the cancellation of the show was announced, fans tried their best to petition to keep the series running.

“It was incredibly heartwarming for all of us. We were realising quite how many people felt so strongly about it. So it was lovely.

“We’ve always had a very amazing fan base, to be honest, and it’s always been very diverse as well.

“You know, the age range of our fans – I get sort of teenage girls sending me tweets and things but then you also get women and men in their 70s.

“So it’s such a great spectrum of people that enjoy the show and connect to it on some level.”

David has taken on an exciting new project of his own to fill his time after Holby City.

The actor is taking part in a show at London’s newest venue – Seven Dials Playhouse, as he takes part in Steve.

Directed by Andrew Keates, the show will begin next month.

“I’m super excited to be involved in the show,” David stated.

“Firstly, to be in a brand new space – to be the first show opening there, especially with everything that’s going on at the moment with live theatre, it’s clawing its way back now.

“It’s been a slow journey. I’ve got a lot of friends who obviously are actors and predominant work in the West End musicals and things like that, and it’s been really, really hard.

“So it feels like a real privilege to be able to star in this alongside the amazing Jenna Russell.”

Holby City continues next Tuesday at 8.20pm on BBC One.