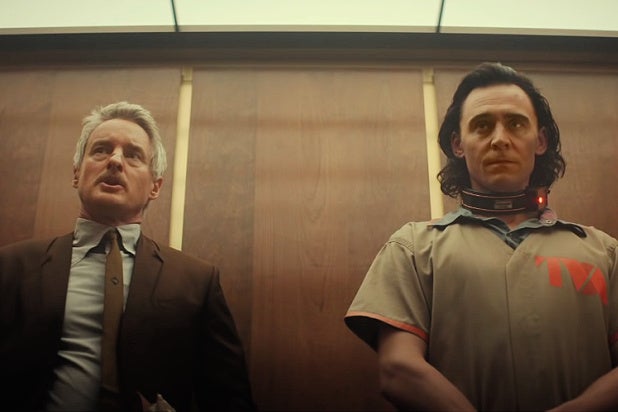 It’s been a long time since there’s been any movement with the Marvel Cinematic Universe. Thanks to the COVID-19 pandemic, we haven’t had any new MCU stuff in a year and half. But now WandaVision’s launch looms, and we just got our first look at the “Loki” series that’s coming to Disney+ next year.

“Loki” will follow the title character, played once again by Tom Hiddleston, from when he escaped the clutches of the Avengers with the Tesseract during the events of “Avengers: Endgame.” As we expected after we saw that movie, Loki will use the Space Stone to explore this new alternate timeline that has been created thanks to the Avengers’ time travel shenanigans.

But beyond that, we don’t know much. And at first watch the trailer doesn’t seem to give us much in the way of new information. While it certainly looks very, very awesome, the trailer is mostly just a bunch of out-of-context shots of Loki being cool as hell. There’s not much in the way of plot being communicated here.

Except, actually, there is a ton of info buried in one line from Owen Wilson’s character, when he references something called “the TVA.” This is actually a big tell, and it indicates that the “Loki” series might its sights set on dealing with the dimensional fallout from “Infinity War” and “Endgame.”

So let’s talk about the TVA.

In the comics the Time Variance Authority is a vast, interstellar and multidimensional bureaucracy formed in the distant future that has assigned itself the job of monitoring the omniverse and keeping all the various timelines in working order.

From time to time that means intervening to stop people from altering the past or future or take steps to actively alter timelines they believe are getting too dangerous. They’ve also been known to show up and attempt to punish individuals they feel have done too much damage — as they did during a notable She-Hulk storyline.

Debuting in “Thor” #372 in 1986, the Time Variance Authority was created by writer Walt Simonson and artist Sal Buscema during a period when Marvel was beginning to experiment with very meta elements, and appropriate is essentially one big in-joke that occasionally gets called in for some really interesting storylines. For starters, since they’re a bureaucracy, they’re staffed by armies of faceless (get it?) people called chronomonitors (get it?), who are created using “quantum technology” and each individual assigned to monitor a different reality.

Chronomonitors report to Managers, all of whom are clones originally drawn to resemble longtime Marvel writer and editor Mark Gruenwald. Known as the expert on the company’s convoluted continuity, until his death in 1996 from an unknown congenital heart defect at age 43 Gruenwald was in charge of keeping everything straight. More recently some Managers have been drawn to resemble Tom DeFalco, who served as editor-in-chief during the 80s and early 90s and had a close, occasionally testy working relationship with Gruenwald.

That’s not even getting into the numerous references to other time travel works — or their weapon, the “retroactive cannon” that is an obvious pun on the term “retcon.” Suffice to say, they’re weird and powerful, and TVA agent characters and the organization as a whole have interacted with several Marvel characters who are set to play a big role in the next phase of the Marvel Cinematic Universe, among them She-Hulk, and the Fantastic Four. And they’ve been known to have territorial disputes with a particularly notable Marvel villain, Kang the Conqueror, who will be making his debut in “Ant-Man and the Wasp: Quantumania.”

For “Loki,” it’s likely that the TVA is getting involved because everything Loki does after teleporting out of New York in “Endgame” would make a mess of the timeline. Loki was supposed to be shipped off to Asgard after the Battle of New York, but now he’s apparently hanging out in Mongolia.

Since we see in the trailer that Loki gets caught by the TVA, it’s not likely that the show will be entirely about them chasing him around the timeline or multiverse. It’s more likely, rather, that after they capture him they’ll form an uneasy working relationship in which Loki helps then solve other problems, in exchange for amnesty or a reduced sentence or something.

This would be a convenient way to mop up after “Endgame,” which kinda left the some versions of Earth in shambles after the Avengers heisted the Infinity Stones from the past — this version of Loki hailing from one of these newly broken timelines. The movie paid lip service to putting the stones back where they came from, but it would be pretty much impossible for Captain America to do that by himself.

But perhaps the TVA, with Loki’s help, could pitch in on that effort. It is, after all, their job. And that would make for an interesting story. A reverse time heist? That sounds great to me!

We’ll find out for sure what this is all about when “Loki” premieres on Disney+ in May.