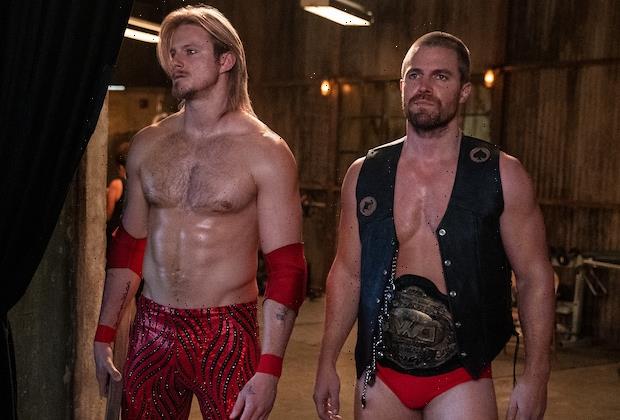 Heels, the wrestling drama starring Stephen Amell and Alexander Ludwig, has been renewed for Season 2 at Starz.

What’s more, the premium cabler announced on Wednesday that Trey Tucker (who plays Bobby Pin) and Robby Ramos (as Diego Cottonmouth) have been promoted from recurring to series-regular status ahead of the series’ 2022 return.

Heels follows Jack Spade (Amell), a family man and wrestler with big dreams to expand the Duffy Wrestling League beyond its small-town roots — which is made even more difficult by rival company Florida Wrestling Dystopia attempting to poach his kid brother Ace (Ludwig).

“It’s clear from the critical and fan acclaim that the stories and characters from the Duffy Wrestling League have made a connection with audiences bringing a community that is not often found to premium TV,” Starz president Jeffrey Hirsch said in a statement. “I’m excited for our amazing cast and executive producers to get back into the ring together for a second season.”

Season 1 ended on Oct. 10 with Jack and Ace exchanging real blows in the ring, and Crystal (Kelli Berglund) becoming the DWL’s first female champion. Series creator and showrunner Michael Waldron (Loki) previously opened up to TVLine about his hopes for Season 2, including the potential to explore the fallout from that main event match.

“You can argue that some of the best matches and storylines [in wrestling] are happening in the women’s division. There’s that same opportunity for growth and expansion within the DWL, so it’s going to be interesting to see what Jack does with them,” Waldron said. “Kelli Berglund is obviously incredible, and what it would be like to bring in some rivals for her could be a lot of fun.”

Waldron also teased the potential for DWL to succeed if Jack can “cede a little bit of control” and give others like Rooster and Diego the push they’ve been fighting for. “Season 1 is so much about fighting against failure. Looking to the future, it’s interesting to ponder: What are the struggles of success that this team might face together?” he shared.

Are you looking forward to Heels‘ return in 2022?