Rahul Mandal made it to the final of this year’s The Great British Bake Off, as Briony Williams was eliminated from the competition on Tuesday night (October 23).

Despite this wonderful achievement, Rahul did draw some frustration from viewers during one moment in the patisserie-themed semi-final.

For the technical challenge, the bakers had the mammoth task of recreating Prue’s seven-layered torta setteveli cake. Not surprisingly, they found time rather limited. Kim-Joy, for example, admitted to running out of time which explained the lacklustre mousse in her bake.

But when Sandi Toksvig called an end to the round, Rahul was spotted putting the very final finishing touches on the decoration as he brought his cake up to the front table: 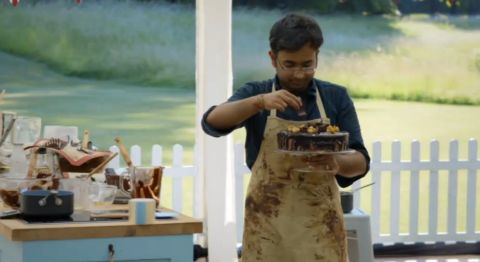 It led to comments from viewers at home.

“The time had finished yet Rahul was still putting decorations on top of his cake! Seriously!!” said one Twitter user, among other reactions.

Rahul finished last in the technical challenge, with Paul Hollywood critiquing the chocolate coating in particular.

“There seems to be serious issues,” he said, sampling the bake. “It was obviously rushed at the end.”

Paul later told Rahul: “You didn’t cover the whole cake with the chocolate mixture, and it was a bit like rubber.”

Rahul is back next week for the final, where he will compete with Kim-Joy and Ruby Bhogal.

The final episode of The Great British Bake Off 2018 airs next Tuesday (October 30) at 8pm on Channel 4.