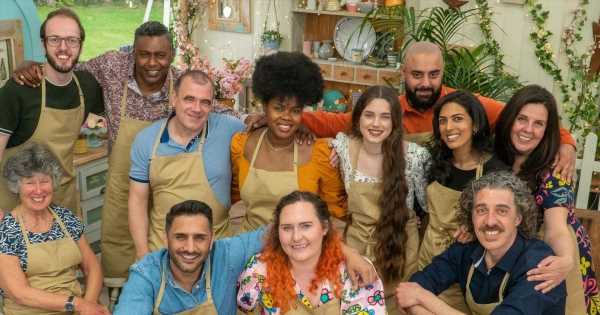 The Great British Bake Off returns for a new series this month, featuring a new batch of bakers hoping to be crowned the winner.

The show, hosted by Noel Fielding and Matt Lucas, with judges Prue Leith and Paul Hollywood, will air on Channel 4 on September 21 2021.

Each episode sees the bakers create a series of themed bakes, including one technical challenge that the bakers are unprepared for.

Last year's series was won by Peter, 20, a student from Edinburgh, who was the youngest ever winner of the competition.

Here is a round-up of the bakers for the Great British Bake Off 2021.

Amanda, 56, is a Met Police Detective from London, who enjoys starting the day with an outdoor swim.

Her love of baking began as a child, when she used to bake with her mum and her paternal auntie.

She takes influence from Greek-Cypriot heritage in her baking, and the viewers can expect to see see Amanda's passion and talent for painting directly onto the cakes during the competition.

Chigs, 40, is a Sales Manager from Leicestershire, who enjoys sky-diving, bouldering and trekking.

He learnt to bake during the lockdown in 2020, learning how to make intricate chocolate work and a variety of bakes.

Chigs has also completed the Three Peaks Challenge in Yorkshire and when he's not baking or spending time with his nephews, wants to embark on his next challenge of conquering Kilimanjaro.

Crystelle, 26, is a Client Relationship Manager from London, who enjoys being part of an online choir.

Born in northwest London to Kenyan born, Portuguese-Goan parents, the flavours of her bakes are inspired by her heritage, and she learnt how to cook from her mum.

Crystelle also enjoys incorporating spices such as turmeric into her bakes, inspired by places she has visited.

Freya, 19, from Yorkshire is a psychology student and has dreamt of being on the show since she saw the iconic Bake Off tent in Bakewell.

Her grandmother inspired her love of baking and the bake off tent can expect to see Freya's passion for intricate design work in her creations.

She also regularly makes plant-based versions of classic bakes for her dad.

George, 34, is a Shared Lives Co-ordinator from London, who loves to garden, enjoys bike rides with his family and has a home full of animals.

He grew up in a close Greek-Cypriot family, and learnt to cook classic Greek bakes from his mum.

The Bake Off tent can expect to see George's flair for detail in his bakes, while adding flavours to his creations with home-grown herbs from his garden.

Giuseppe, 45, from Bristol is a Chief Engineer who loves to garden and has an interest in architecture.

Born and raised in Italy, his father was a professional chef who taught Giuseppe how to bake. Together, they would bake a cake every Sunday.

Viewers can expect to see him create bakes inspired by Italian flavours, while applying his engineering background into the construction of his creations.

Jairzeno, 51, is a Head of Finance from London, who regularly completes half marathons and participated in the London Marathon in 2012.

Jairzeno loves to combine Caribbean flavours and spices into his bakes, such as guava and chocolate, and viewers can expect to see his passion for creating perfect patisserie finishes in his bakes.

Jürgen, 56, is an IT Professional from Sussex, who is also a talented trombonist.

Originally from the Black Forest in Germany, he began baking when he could not purchase his favourite traditional bread and decided to bake his own.

Jürgen also has a flair for creating celebration cakes, which he enjoys making for friends and family in his spare time.

Lizzie, 28, is a Car Production Operative from Liverpool who loves to dance and can regularly be found dancing the samba.

Her favourite treats to bake are cakes, and viewers can expect to see Lizzie's passion for simple presentations in her creations.

She also loves to experiment with flavour combinations in her bakes, and says that she "believes in flavour and quantity over presentation."

Maggie, 70, is a retired nurse and midwife from Dorset, who loves to spend time with her great nieces and great nephews and take part in water sports such as canoeing, kayaking and sailing.

She learnt to cook from her family, who were always baking and cooking when she was growing up.

Viewers can expect to see her passion for traditional recipes in her bakes, but with a twist, as she loves to experiment with flavour combinations.

Rochica, 27, is a Junior HR Business Partner from Birmingham who loves to bake for her niece and nephew.

Having been a dancer since she was two years old, she learnt to bake after being unable to dance due to an injury, and still dances when she isn't baking.

Viewers can expect to see her create bakes inspired by her Caribbean heritage, with Rochica saying that she bakes with "flavour, passion and love."

Tom, 28, is a software developer from Kent, who is also a runner, singer and loves to take part in amateur dramatics.

His passion for baking began in primary school, but he started baking regularly four years ago after making his dad a sticky toffee pudding.

Viewers can expect to see Tom's love for making a recipe his own, creating fun bakes for people to enjoy.

Bake Off returns on Sept 21 on Channel 4.