Graham Norton must be used to diva requests from celebrities after hosting his chat show, The Graham Norton Show, for the last 11 years.

But the Irish TV host admitted that there was one guest who shocked him with their list of requests.

Speaking to The Daily Telegraph, he revealed: “We had someone once who required nine dressing rooms. But we managed it, and then in the afternoon someone from their team came running into the production office saying, ‘It’s a 911 situation. We need another dressing room.’

“We managed it but said, ‘Just out of interest, what’s it for?’ Completely straight-faced, ‘They want to charge their phone.’ 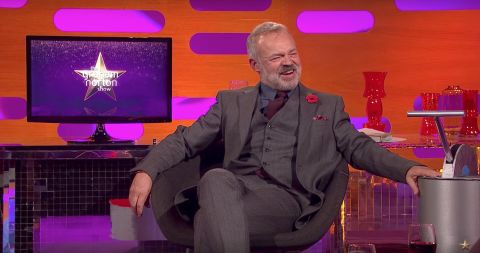 “That took our breath away. How somebody’s life gets to that point, where they cannot be in the same room as their phone, is beyond me. We live like animals, sharing rooms with charging phones.”

Thankfully for the guest in question, Graham stayed tight-lipped about who the person in question was.

The 55-year-old also explained how he stays cheery on the chat show, even if he’s not feeling it so much.

“I’m at work,” he said. “If your job is frothing milk, you’ve got to froth the milk. My job is to be a cheery chat-show host so I better be that or I’m going to get fired.

“If you’re going to leave the house and go to work, fake it. No-one is interested if you burnt your toast.”

The Graham Norton Show continues this Friday (October 12) at 10.35pm on BBC One.

Next post Who was Billy Yates? Zoe Ball’s late boyfriend and cameraman who died aged 40