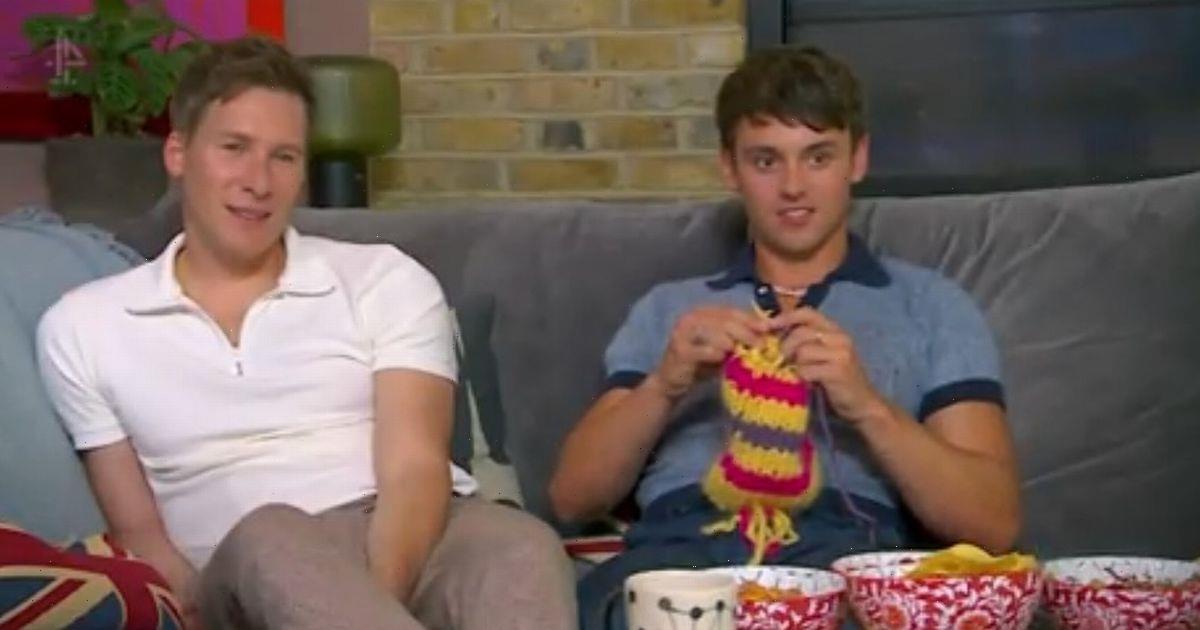 During the opening clips from tonight’s (October 28) episode of Gogglebox, Tom Daley, 28, and his husband Dustin Lance Black, 48, got into a cheeky row about their privates.

Watching an episode of BBC2 game show Only Connect, host Victoria Coren Mitchell said: "United by a fascination with figures they are the Statisicals."

Tom suggestively joked as he was knitting what looked to be like a hat, “My team name would be Sirtesticles.”

Dustin looked unimpressed with his husbands joke as he replied, “Yeah… yeah. I mean sounds about right. The nation’s familiar with them. You’ve had them hanging out you entire sporting career."

Tom quickly and defensively replied, “Er, I wear trunks two sizes too small so that nothing falls out and is in the way when you hit the water at 35 miles an hour. You don’t need anything hanging out."

His husband was clearly not happy with the Olympic gold medal winner as he said, “Well doesn’t leave much to the imagination either.”

The two have been married since 2017, but have known each other since 2013, just before Tom came out.

He announced that they would be welcoming a son via surrogate on Valentines Day and wrote: “HAPPY VALENTINES DAY!” With two red heart emojis either side of a two days and a child emoji.

He then announced that their son had been born in June that year.

He wrote in the caption: “7/06/18 • Welcome to the world our precious little Robbie Ray Black-Daley [red heart emoji]

The most magical moment of my life. The amount of love and joy you have brought into our life is immeasurable. Our precious son. [read heart emoji, baby emoji, and another red heart emoji]”.

Tom has said about his relationship with Dustin, “Lance is one of the most complicated creatures on the planet, but that’s why I love him.

“He’s sensitive, courageous, committed, dedicated, hard-working and, above all, he makes me feel safe.

“When I’m with him I feel like I can take on the world.”